Gordon and I stopped off at Kilkerran yesterday to see how the bank reinforcements were holding up following the high water levels much of this winter. The problems with erosion at Kilkerran arose after the river was straightened many years ago. As normally happens following modifications, rivers will attempt to cut back to their natural route. At Kilkerran, two high banks were in an advanced state of collapse and several meters of land were being lost annually.

The Trust couldn’t secure a funding solution to assist with this work but I remember a visit on a cold winters day with rain back in 2011 where we suggested some green engineering solutions may be suitable. SEPA were involved from the start and the Estate last year engaged a contractor to reinforce one of the erosion points using trees and root balls.

A combination of trees and root balls were used in an attempt to stop the erosion at this point.

Depsoition on the right bank will continue to push the flow against the left bank. A tree has either moved from its position on the left bank or has washed here from upstream but I suspect it is the former.

Looking at the results today, we noticed that some of the trees had moved from their positions at the toe of the bank. Deposition was occurring on the opposite bank and I suspect this will continue to increase pushing the flow against the reinforcements that remain. I’m not sure how effective this reinforcement will be in the long term but will watch with interest as we have a similar area of concern near Patna on the Doon that we hope to address at some point soon although green engineering may not be appropriate or approved for there.

A short distance upstream, the Estate have used another technique to reduce the erosion and it appears to have been more successful. Woven reinforcement has been installed and sediments have built up behind them and should continue to do so. I’m not sure what type of wood was used for this as it doesn’t look like willow (but I may be wrong) but at least it has remained in place and appears to be working. I expect this could be improved further by extending the woven barrier further downstream and perhaps another tier built on top of the deposited sediments later this year. As it appears to be working and probably a much cheaper option that the less successful tree reinforcements, the Estate may be able to do this. If not, perhaps a volunteer group could be arranged to help with this? 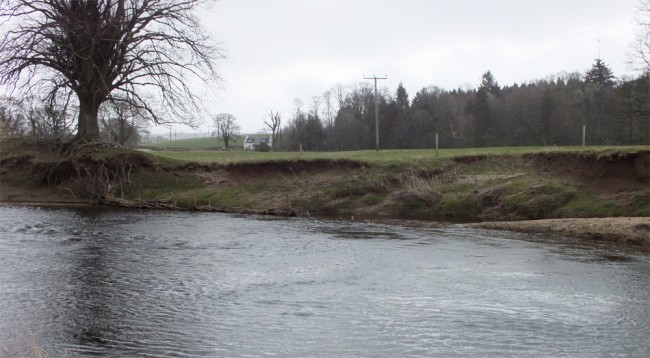 Although not that prominent, the line of woven reinforcement can just be seen at the edge of the current.

This is encouraging as we hope to use this and other methods to stabilise erosion on the Culroy Burn in the Doon catchment this summer. As ever, SEPA will be involved in an works insert and the appropriate CAR licences applied for. We would really like to be able to take on similar stabilisation work across Ayrshire and with the help of enthusiastic volunteers, I expect we could. I’m sure there will be no shortage of eroding banks suggested to work on.