I think this is the 3rd successive year that fish have been killed on the Fenwick Water from pollution. SEPA informed the Trust yesterday that there had been a localised incident on the river that resulted in a number of fish (presumed to be trout) dying.

Unfortunately, Stuart was in Perth at the RAFTS/ASFB conference and was unable to attend but SEPA water officers and ecologists had identified the source as a Scottish Water discharge near Boreland bridge. This was the same source as the incident 2 years ago and another similar incident around 2008/09. Last year the source was thought to be a short distance downstream. This incident occurred sometime on Tuesday afternoon with a report first reaching SEPA around 6.00pm.

ART has spoken to the SEPA officer who attended and Scottish Water are currently investigating themselves. Fish samples have been taken by both organisations in an attempt to determine what it was that killed them.

ART has informed Kilmarnock Angling Club of the incident and share their frustration over these repeat occurrences. With juvenile salmon having been relocated to the affected area in 2012 and 2013 during the fish rescues in the Town Centre, and the hatchery stocking salmon fry to the Fenwick Water last year, we have to hope that at least some of these juveniles survive to return and restock the river naturally but these type of pollution incidents are highly damaging and detrimental to the process of recovery. With all the barriers being eased on this catchment, this could become a very important river for salmon production in future given the chance.

We have asked SEPA to keep us posted of any progress. We also asked that in future, as soon as they become aware of any incident that is affecting fish, to please let us know so that we may attend and attempt to move them to safety (this offer is for the whole of Ayrshire). 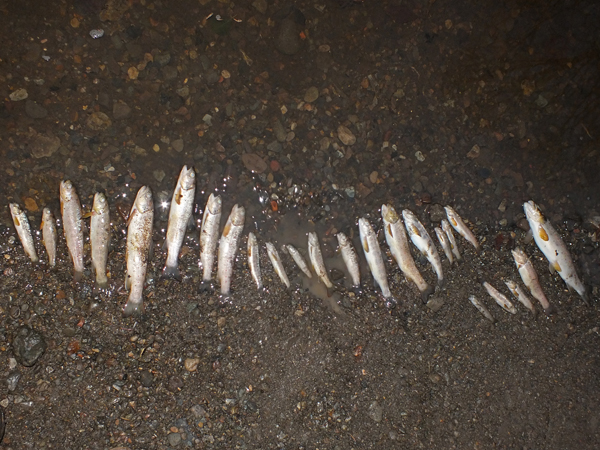 A photo from a previous pollution incident in the same area.