Finally after more than a year and a half in the planning, we arrived at Caaf reservoir this morning to remove as many trout and other species from the reservoir before the dam wall is breeched and the land reinstated. The restoration will take in the order of 36 weeks following the completion of the fish rescue. 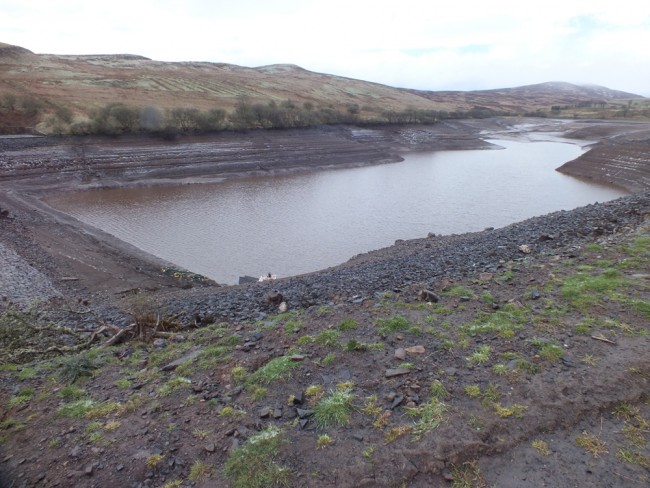 Water levels were about 10′ lower than requested but we managed to work away despite some difficulties due to the low level.

The sun was shining as we arrived at the reservoir but there was a chill in the wind that indicated a change was imminent. Following site inductions, safety briefings, accident procedures, biosecurity measures etc etc, we set about getting the boats in the water and commencing the task of netting the fish. Unfortunately water levels had been reduced beyond the requested levels by around 10′ so launching a boat across wet mud was a problem. The inflatable was fine but the dory was rather more difficult and it stuck in the glue like mud. We did eventually manage but have had to book a JCB for recovery of the boat and net as there no chance that we will be able to get it back up the slope manually. This evening after we finished work, we left the boat on a temporary mooring for safety.

The first sweep of the net was encouraging although there were no big trout in the haul, the largest would be around 10″. To our relief, they were all healthy and lovely wee wild brown trout. One minnow was the only other species caught. 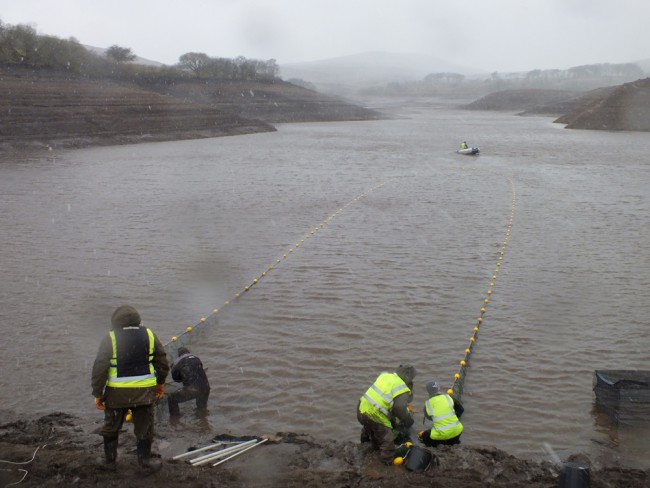 Drawing the net in snow. There’s no alternative but to press on when the weather turned nasty and everyone pulled together to get the job done.

We shot the net several times over the afternoon finally calling it a day around 6.30pm. With some fish delivered in the afternoon to Glen Burn reservoir a short distance away, the remaining brownies were taken to another location on the way home. We never lost a single trout through injury which was a very good result and better than expected. I suppose it’s all in the preparation and we’ve had plenty of time to get it right. 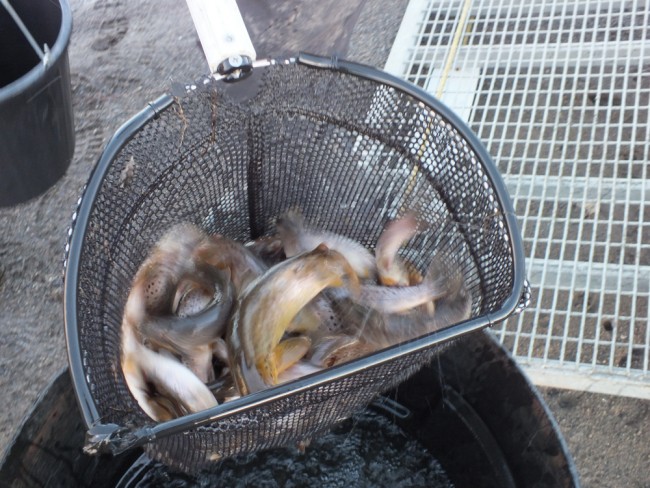 Net after net of these lovely wee browies were removed to a holding tank before finally being transported to the receiving waters. 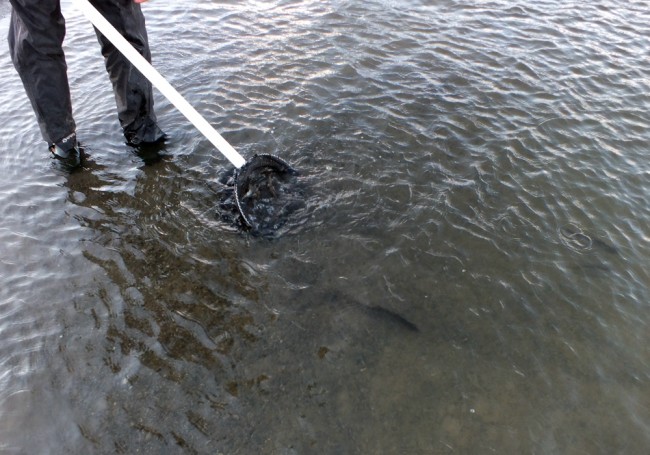 We released hundred of trout into new venues under licence from Marine Science Scotland. Many more will be relocated tomorrow

Overnight we have left a series of fyke nets deployed that will hopefully bag a few eels and more trout by the morning. We will provide an update after tomorrows netting. Over the next week or two we will return and remove any fish that we missed that are sucked through the outlet into the settlement ponds. I expect there will be a few parr and minnows as they may slip through the mesh.

Finally I’d like to thank all those who lent a hand today. Without their effort, we would have struggled to retrieve so many fish. They know who they are and your assistance was invaluable. Thanks from all at the Trust.