Following the silt pollution over the weekend that arose from Caaf Reservoir, I can update concerned anglers with the latest information that I have. We visited the site this morning to find the flow has now been cut totally to the Caaf to prevent further silt being released. 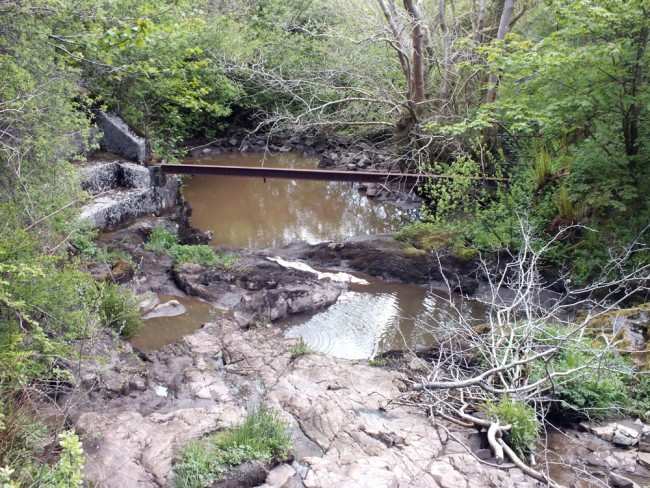 Looking downstreamm to the Caaf Water where there was no flow today. just over a year ago, this was a beautiful, clean, deep pool with a reasonably good stock  of wee wild trout.

This is an understandable precaution required by SEPA but it leaves the Caaf Water at low flows and the fish that remain will struggle should temperatures rise. This is a short term precaution as Scottish Water’s contractors are to over pump clean water from upstream of the reservoir down the spillway and into the Caaf again to keep fresh water flowing. This may take a few days to arrange but Scottish Water are onto it. This is a major task in itself. Scottish Water has also opened the top draw off at Munich reservoir and are diverting water over to the Caaf via the Caddell Water but this will only freshen the lower reaches of the Caaf but at least it will help.

The reservoir was at the lowest level that I’ve seen and we will now quickly organise another fish rescue in an attempt to remove as many fish as possible from the water. We will be working to arrange this tomorrow and will let readers know when we plan to do this asap. Our licences for removing and stocking the fish have been extended until the end of next week so fingers crossed it doesn’t rain and we get the  job done. 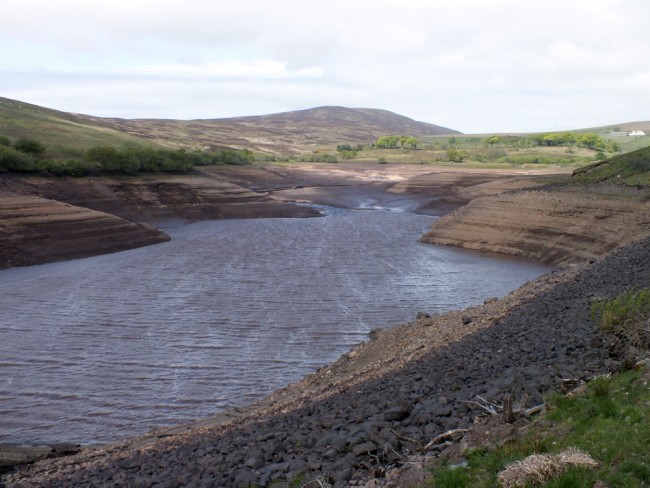 The reservoir today. Levels are around 5 – 6′ below those when we last removed fish.

Downstream, the settlement ponds were a mess. Thick silt coated the bottom of each pond and it was obvious something had gone badly wrong with the drawdown. I’m still waiting to hear exactly where the failure(s) lay and don’t want to speculate on this at present. I’d rather deal with facts. We saw fish dead in these ponds and presumably there are more buried within the silt. Some fish have been washed over and downstream and lets hope they survive but the habitat between the reservoir and the Garnock has been similarly affected although thankfully to a lesser extent.

Two dead trout at the edge of one of the settlement ponds. How many more were buried in the silt is anyones guess. There were heron footprints in the mud but it was so deep it looks as though even it struggled to cope with the conditions. 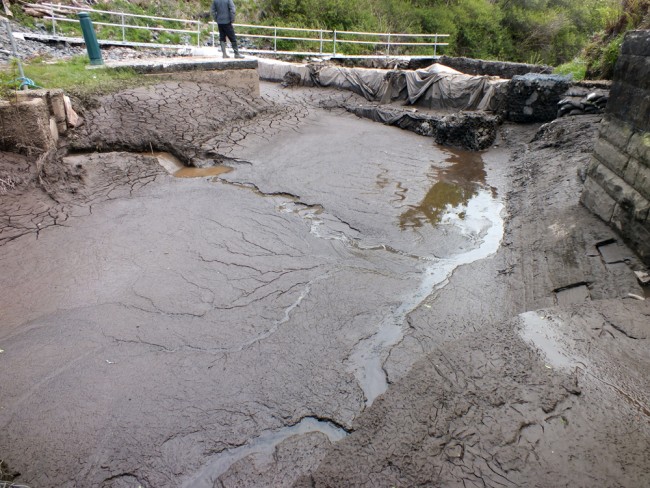 Some mortalities are inevitable in such operations but until we know what went wrong, it’s impossible to say whether this could have been avoided. There were fish partially buried in this and other ponds.

SEPA ecologists were on site today sampling invertebrates up and downstream of the reservoir. Early indications are that the invertebrates haven’t been too badly affected but I am concerned that it is early days yet and we all know invertebrates respond to pollution over time rather than instantly so hopefully these surveys will be repeated for the next few months until the river bed is clean. Scottish Water have also informed me that they will be engaging consultants to perform invertebrate sampling. ART highlighted to all concerned in the consultation process before the job started that there should be fish and fish habitat surveys performed but the consultants engaged by Scottish Water stated this wasn’t necessary despite our protestation. Unfortunately no ‘professional’ fish surveys were performed (two less than perfect walk overs dismissed this as an unimportant trout habitat with few fish present) and there are no formally collected base line data against which anyone can monitor the impacts of this and the previous incident. I have highlighted this failure to Scottish Water and SEPA and reinforced that local expertise should be used in advance and throughout this type of operation in future. Lessons must be learned.We have an electrofishing site in the lower Caaf that we fished in 2012 so should be able to compare results from then to now but I will wait a month or two before undertaking this to allow the impact to become obvious. It’s just too early to say how damaging this event has been. I will also need instructions from Scottish Water, SEPA  or Dalry Angling Club before I proceed with this. 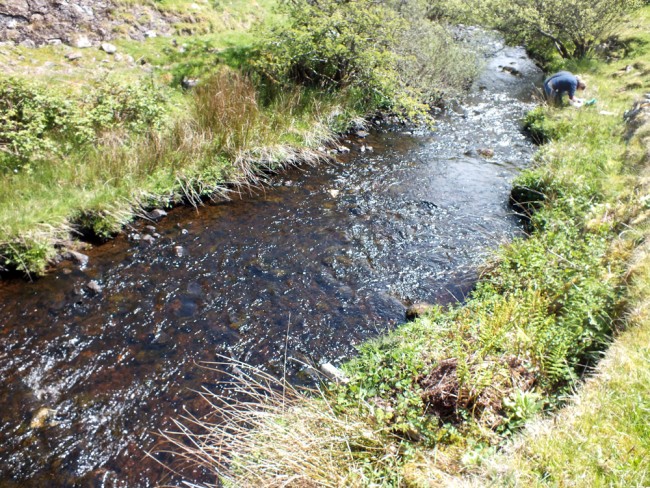 SEPA ecologists collecting invertebrate samples in an effort to assess the impact of the incident. This was upstream of the reservoir. Compare this to the photos below from downstream.

We progressed downstream and wherever we looked, there was a think coating of silt on the riverbed and the margins. Where there was sufficient flow, stones were visible but the spaces between the stones were clogged. This will take several large spates to clean this up and the silt will only be carried downstream further. Spates are unlikely until all the work is completed as the flow will be managed to prevent  further problems. The impact of this on the fish (trout, salmon and eels) is likely to be felt for some time, probably years. 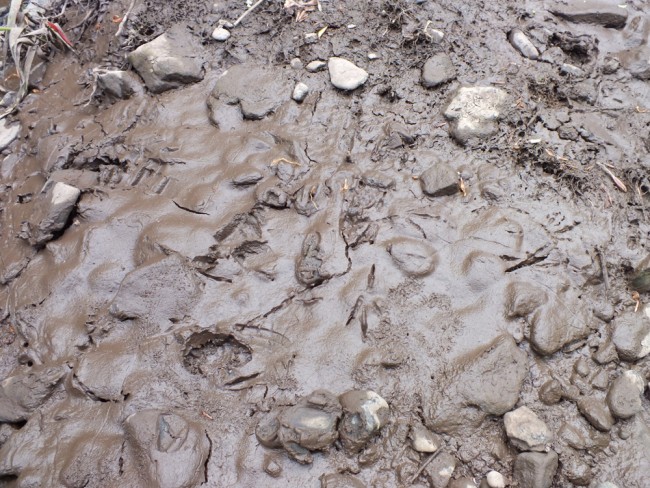 I’m most worried about the fry that will only recently have emerged from the gravel if they survived the last incident. 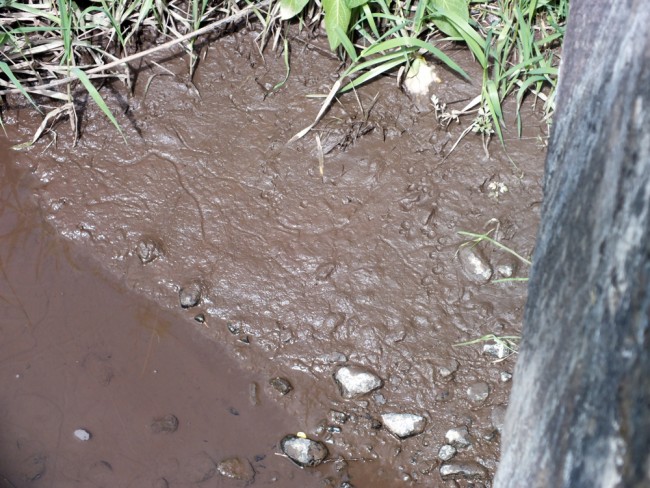 The view over the bridge at the Shooting Ground entrance. Minnows were seen but no trout (but that doesn’t mean they haven’t survived). We have images and video taken at this pool a year ago that we will compare. 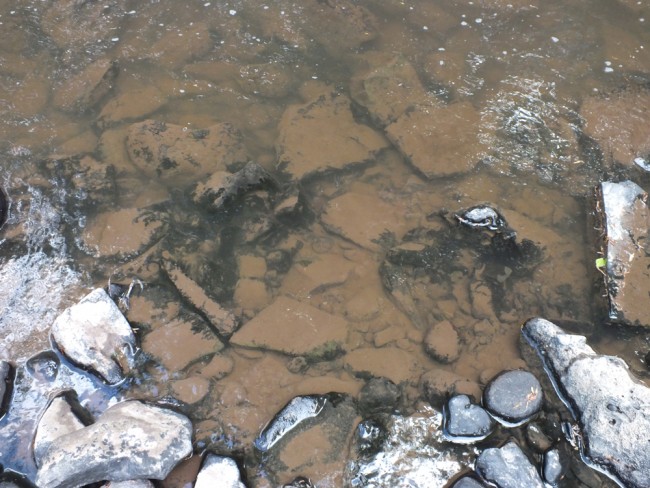 Upstream of the bridge at Dalry where silt was still thick and coating all but the fastest flowing habitat.

Lets hope that all agencies work together (ART included) to find the appropriate solutions to this problem. We are here to assist if we can (and I expect we can).

We have received numerous calls, messages and complaints about this situation and anyone wishing to leave a message or comment is encouraged to do so by using this blog page, emailing the Trust (info@ayrshireriverstrust.org) or messaging us on Facebook (link above). I will ensure that the comments are passed on to those who need to hear them!