Diesel pollution on the Doon

We are receiving calls from concerned anglers on the River Doon at the moment regarding diesel pollution entering the river near Monkwood. We first attended this incident last week and reported it to SEPA along with several other anglers. After a quick run around the catchment we quickly identified the approximate area that the pollution stemmed from and SEPA were asked to investigate further. SEPA duly attended and revisited on Monday of this week. At this point in time, around a 6′ band of pollution was visible but restricted to the right bank.

Yesterday SEPA’s attending officer called to update the Trust with their findings and it appears the pollution stems from a contractors yard nearby where diesel has contaminated their land and is now seeping into a nearby burn and in turn the Doon at Monkwood. The contractors started working to resolve their problems and contain the pollution today but judging by the calls I’ve had today, the situation has worsened. Booms are in place in an attempt to absorb the diesel before it reaches the river but I hear it now affects half the width of the river around Auchendrane and is visible as far downstream as Doonfoot.

Will be attending this incident  tomorrow morning to see what progress has been made and to check for any obvious impact on the fish population. I’ll update readers when I have further news but lets hope this is resolved quickly as our fish are under enough pressure without this type if incident occurring. 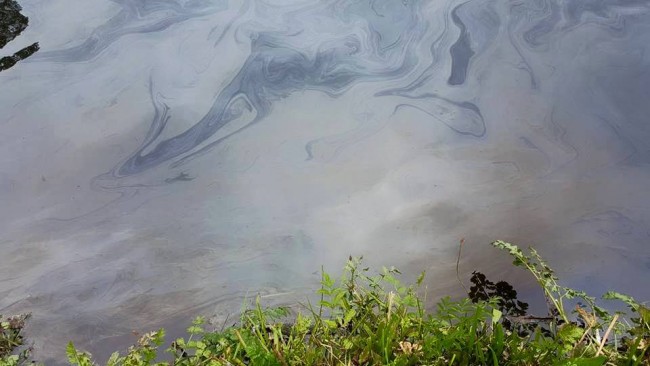 A diesel slick that affects around half the width of the river as of today. This appears to have been an ongoing problem for some time.