At the end of the day on our way back to the office we dropped into Auchendrane on the Doon to see how I & H Boreland Contractors were progressing with the new notch and baulk fish pass. Both side walls were complete and work to the crest and base were underway. The workforce informed us that all going well, they hope to complete their work tomorrow and clear their equipment from the site. 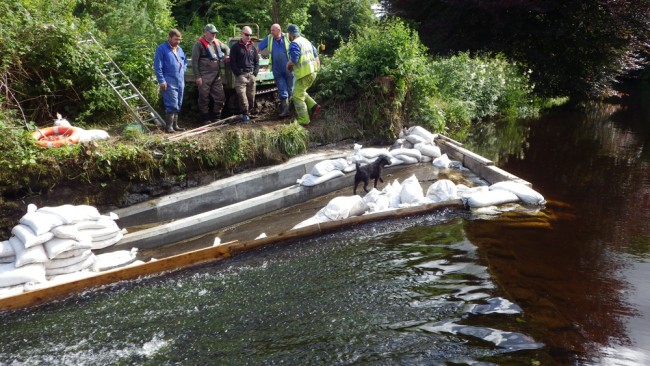 Getting a progress report from the team. Brewster inspecting the job.

In the last post I made about this work, I mentioned that a few sand bags were at the ready. Daniel, John and Arthur informed me today that there were 400 sand bags all hand filled used on this job and that they had filled them. I told them I update readers with the truth. Anyway, Well done to the three of them for getting this job done so quickly. (I know I’ve got at least one of their names wrong but I like to give them something to moan about when I visit and I know they read this blog!) I’ll see them tomorrow afternoon and catch it no doubt. I won’t mind as long as its finished and works!!! They are a good team and we’ve worked with Euan Kerr and his men on several jobs now and can highly recommend them for this type of work. 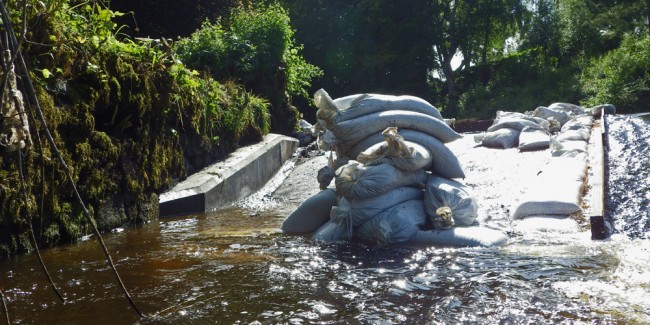 The offending few sand bags mentioned in the previous post. More importantly, the side walls are in and alterations to crest and base are underway. Hopefully the site will be cleared tomorrow evening followed by a spate to bring the first fish into the pass.

The fish pass has now been completed and looks as though it will work just fine. We will have to wait for water to see though but I hear heavy rain is forecast for tomorrow so fingers crossed. 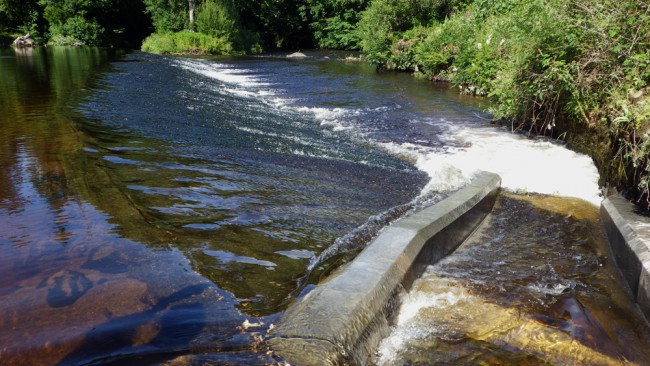 A strong attraction flow produced by the fish pass.