Our Carrick Invasive Project officer Meryl Norris and I treated a large amount of Japanese knotweed at Hallowchapel on the Stinchar during September 2012. Results were very encouraging with virtually no regrowth visible in 2013 and 2014. Of course there was the occasional shoot that had been missed but overall the results were good.

Last year we noticed that the landowner had been to the site and moved a small patch of gravel where a stand of Japanese knotweed had been treated. There were no visible plants to be seen so he could be forgiven for this error but within 2 -3 weeks, we noticed fresh root development on the exposed rhizomes. We revisited the site today wondering what to expect.

As we drove in, we saw that Himalayan balsam has largely colonised the old Japanese knotweed sites. 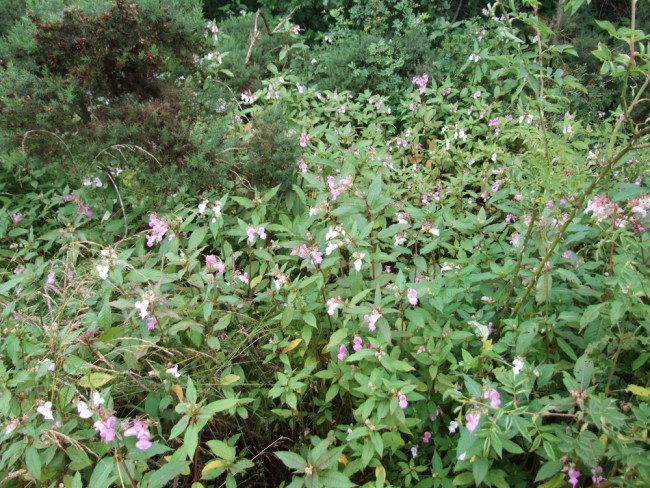 Himalayan balsam occupies sites where Japanese knotweed once dominated. This was not unexpected.

Only an occasional stem of knotweed was obvious and certainly nothing that worried us. Single stems are easily treated with injection. As we rounded the corner to the disturbed area, I half expected to see tall stems of the plant towering above everything else but didn’t. What was visible was extremely stunted regrowth; the sort that makes future control almost impossible. We will monitor this in the coming years to see how the plant develops. 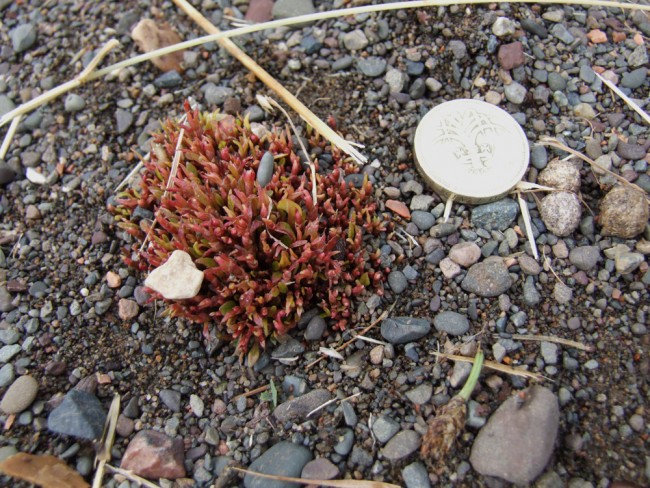 Extremely stunted regrowth one year after a treated stand of Japanese knotweed was disturbed. This type of response leaves the plant virtually impossible to treat ….. but for how long?

Unfortunately Queens University Belfast, our CIRB partners, failed to analyse the root samples we sent them which would have given us the same answer to the question ‘Does spraying with a single treatment of Roundup when the plant is flowering, kill Japanese knotweed?’ The answer appears to be a resounding ‘No!’ It does however put the plant into a state of dormancy which stops it spreading. We now need a definitive answer to the same question but using Stem Injection methods. We must have a look at this in more detail.