Have a look at the photo below showing a new site on a good wee burn we surveyed today in the Stinchar catchment. We’ve always found good trout numbers in this burn and salmon feature too but we decided to fish this new location further upstream than previously in an attempt to work out how far salmon actually reach. The habitat at the chosen site is excellent and although some alterations may have been performed a long time ago, the burn is pretty much natural and as it should be. The modifications I mention would typically have consisted of the removal of boulders for dykes which was common practice in this area 100+ years ago. 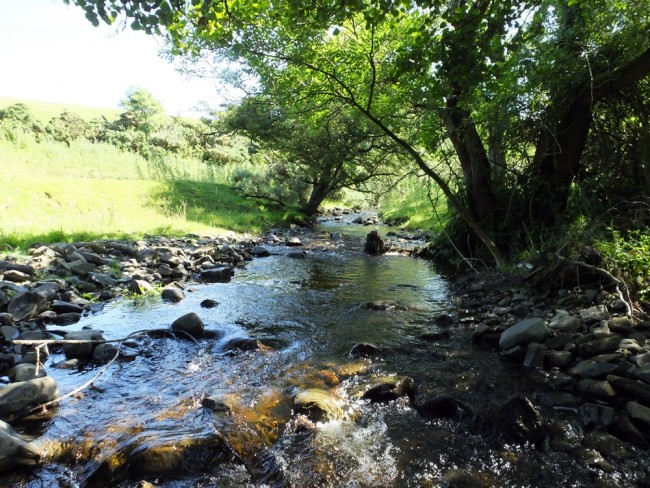 Not perfect but nearly.  The habitat is stable, of high quality for fish and invertebrates and water quality is good. Everything is just about as it should be.

Trout and eels made up the catch and in acceptable numbers but they weren’t as prolific as at the existing site downstream. We checked for barriers between these sites and didn’t find any. There is a pollution point immediately downstream of the new site and we will attend to this butI don’t expected it has much impact and certainly not enough to deter migrating trout and salmon during winter flows. We decided to compare results at the new site with the established site further downstream and set off to fish this one too. As ever, the trout numbers were good but for the first time during our surveys, salmon were absent from the catch. 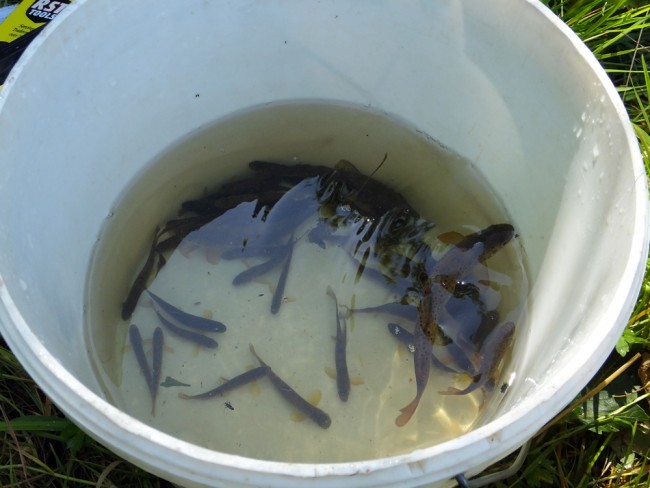 A nice catch of trout from the burn where the habitat provided spawning opportunities, fry and parr habitat and a limited amount of adult habitat too. Trees provided shade and add woody debris to the watercourse which supports invertebrate populations.

This made me wonder if the lower burn had become blocked, preventing salmon from reaching the two sites. There have been historic problems with erosion and mobility in the lower burn and I wondered if perhaps a gravel bar had built up preventing access although this seemed unlikely. Muir and I headed downstream and decided to undertake another survey in the lower reaches see if salmon had in fact spawned within the burn last year.

We choose a site near the top end of the field where erosion has been a long term issue and set about surveying it. We weren’t filled with expectation as there had been recent modifications to the bed and banks within the chosen site but we decided to fish it anyway. The site had been picked at random to be representative of what’s there.  By the time we fished the length of the site I was concerned as the only fish caught were a few minnows. 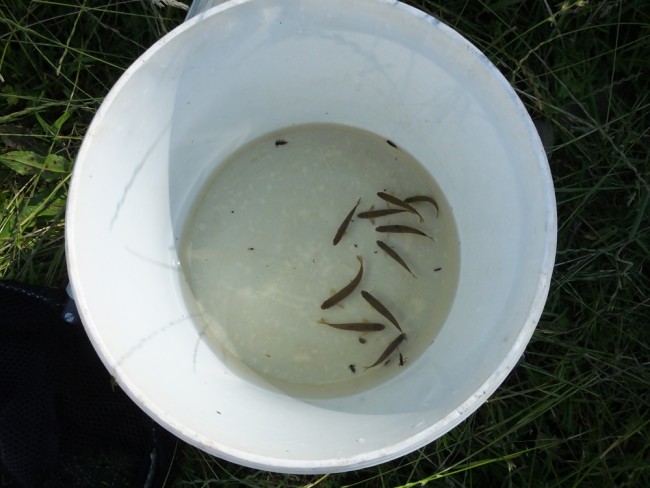 A few minnows were all the fish recorded at the lower site. Compare this catch with the bucket of trout above,

Mose worryingly, I was concerned about the alterations to the burn and decided to walk downstream to the river to see the remaining section. We don’t know when these modifications were made but it is fairly recently as we could still see signs of machine marks on the banks. The photos below illustrate what we found.

Historically the burn has been dredged repeatedly but as we know, this only exacerbates the problems and fails to achieve any long term results. Dredging is highly damaging to fish populations as the features that encourage/ enable fish to survive are removed. 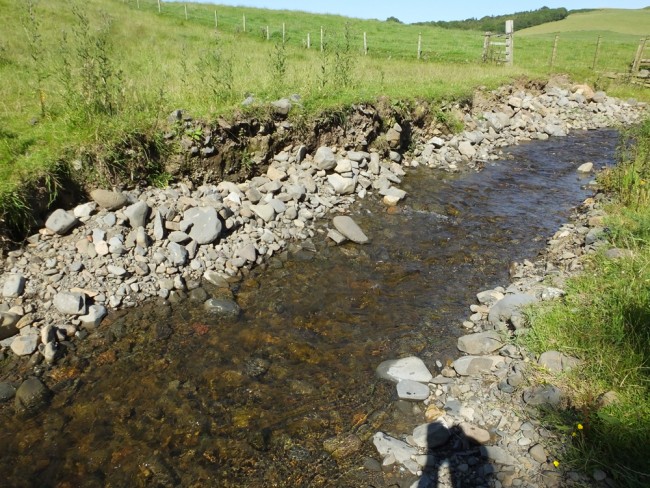 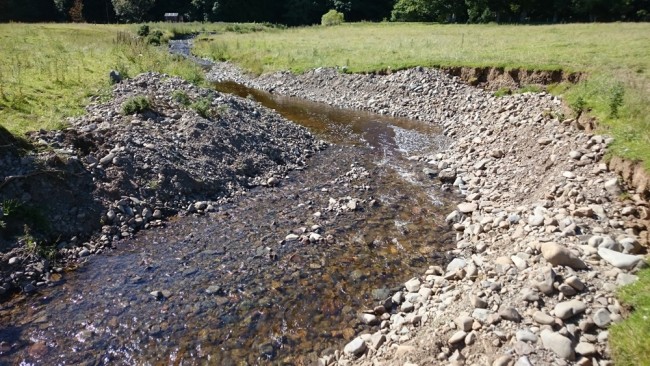 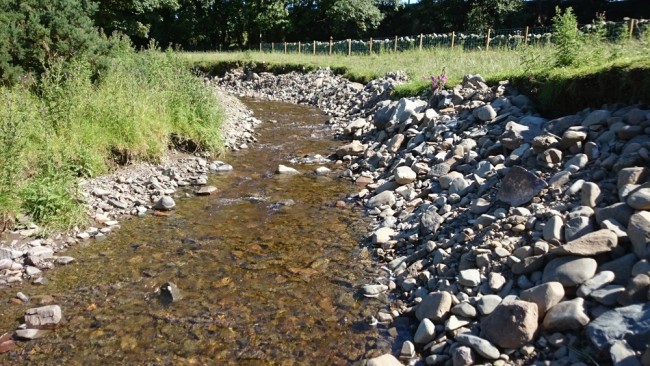 The habitat has only been further destabilised by recent dredging 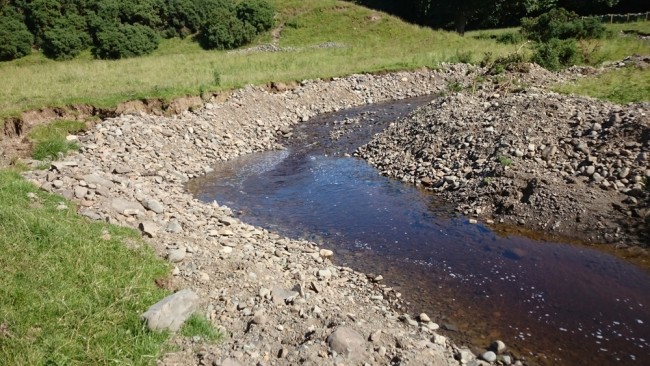 Pool habitat but nowhere left for fish to hide. This type of alteration is devastating to juvenile populations

ART’s recommendation that the burn be fenced has been consistent since before I took over from Brian Shaw. The reluctance to fence the burn comes from the fear that the fence will be lost quickly should the burn alter course. Mobility is an issue often created by man’s intervention and in this case, we can only expect instability for years to come as a result of  this work.

Since I first looked at this burn I can’t see that it had changed much in terms of it’s course and if adequate buffers were provided along with tree planting, I expect it should stabilise over time. It is stable upstream and I see no reason why the lower burn should be much different. This recent dredging has removed all fish cover and any signs of natural restoration that had been taking place have been lost. This burn will take years to recover. ART will be preparing a report on this issue for the Stinchar DSFB immediately and will speak to those responsible for this work to establish why this was performed and if CAR licences were in place.

Muir and I discussed this on the way home. I’m often heard saying that some of the greatest problems facing salmon survival lie at sea and as he rightly pointed out, we can’t be complacent and ignore the fact that there are still problems within our freshwater environment that limit productivity. I fully accept his point but have never lost sight that there is still much to do within our rivers and from what we saw today, I suspect education is still a major part of it!

One Response to Disappointment and frustration…