Pundeavon fish rescue went ahead on Thursday and what started as lovely weather soon deteriorated, almost predictably into a wet miserable afternoon.I saw Gordon applying the sun tan cream this morning and knew the day was cursed! However, it was far more pleasant than the sleet and snow we experience at Caaf Reservoir in May. Overnight the water levels had risen by a couple of feet as the drawdown valve had been closed. 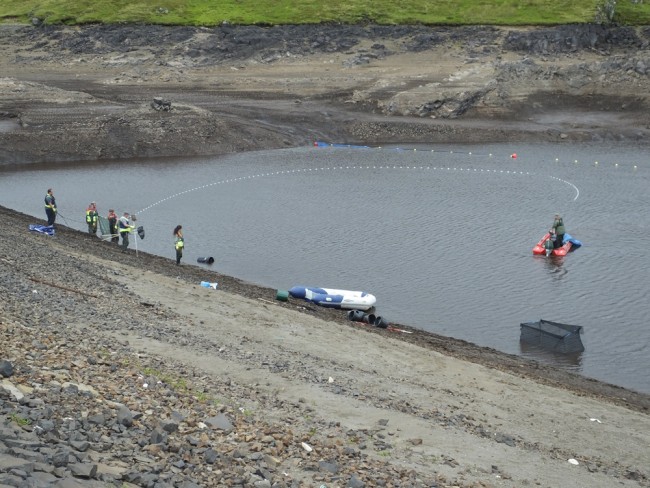 Shooting the net during the morning 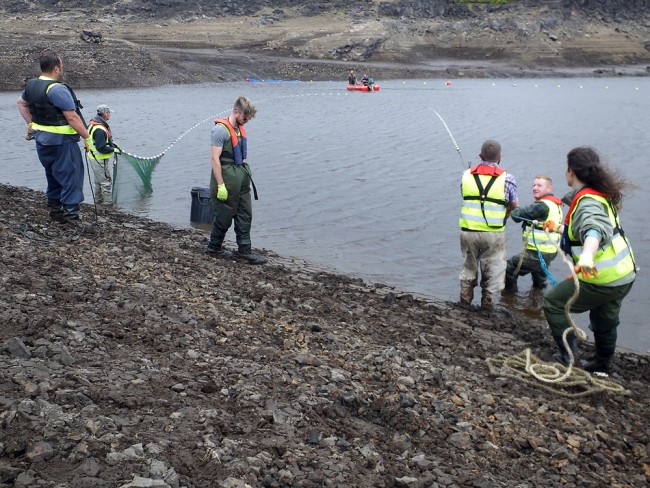 We were able to use our smaller net in Pundeavon which is much easier to draw than the big one but it’s still a hard day’s work. Underfoot, the silt makes everything slippery and soon everyone was coated in mud.

We were assisted by Gary Anderson, Jimmy Mair, Mark Grant and Marc Scott who are all local volunteers that generously gave their time to make this possible. A huge thanks to them all. Apart from the usual paid staff we also had Mark Hirst and Rita Goncalves on hand for their specialist skills and knowledge. In all 10 of us were there to rescue as many fish as possible. We expected to catch predominantly wild brown trout and possibly a few rainbows. Our gill net surveys over a year ago had shown that the reservoir contained a small population consisting mainly of small wild brown trout, probably due to the lack of feeding in what is basically a deep, sheer sided hole. Local opinion was that was that we had missed the larger fish  and many rainbows but I was confident in the results and this was our opportunity to see what was actually present.
After the usual slow start setting up and preparing everything, we commenced netting around 11.00am just as the weather began to deteriorate. The first sweep was tremendous with an estimated 700+ trout caught. We broke for lunch around 1 o’clock by which time it was nice to get a heat in the site offices. It is always a dirty job and everyone ends up caked in silt, so the portacabin didn’t stay clean for long. 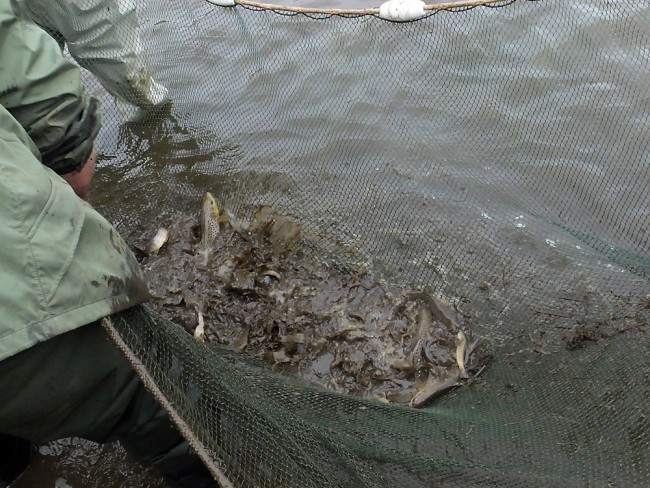 Numbers in each draw of the net declined quickly 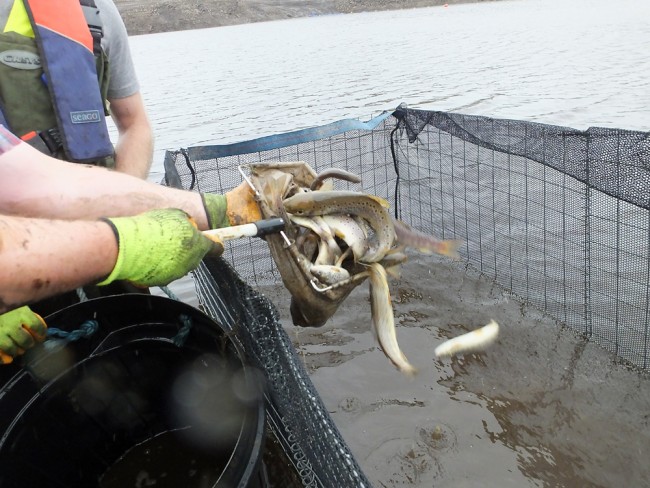 Transferring the fish into a holding cage where they can be monitored and kept safe until their relocation at the end of the day. All the fish we caught appeared heathy although some were a bit on the lean side 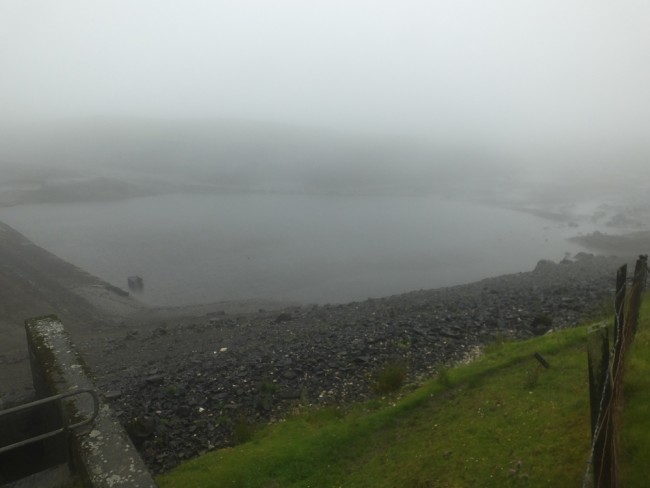 The weather quickly deteriorated after lunchtime.

Lunch over we carried on netting repeatedly until after 3.00pm when we decided we had caught most of the fish (not all) and should call it a day. An estimated 1200 wild brown trout were caught. No rainbows or stocked brownies showed up and there was nothing over about 13″ in length so I feel our initial survey results have been completely vindicated. Of course there are bound to be a few fish still in there but we netted as much of the reservoir as the depth would allow and watched the catch decline to just around 10 wee trout with each of the last few sweeps of the net before we decided to call it a day. I think everyone was impressed by the stunning wee trout that were caught and the range of colours amongst them. Interestingly we never found a singly stockie in the catch. I saw a rainbow of about 3lb caught a couple of weeks ago and there has been a few regular anglers almost daily trying their best to catch them but I’m told by the site staff that very few had been caught recently. Out of all the fish we caught, we only had 2 casualties by the end of the day which indicates that our methods, fish handling and transport operation is excellent.  I’m afraid the pictures taken on the day weren’t great as the weather deteriorated so much and with mud everywhere, it just became impossible to take photos.

After completing the netting operation, the difficult task of recovering boats, nets and fish from the reservoir was made easier with the assistance of George Leslie’s staff that were on site. The fish were relocated to Kilbirnie Loch under license with the permission of Kilbirnie Angling Club, <arine Scotland Science and SNH. 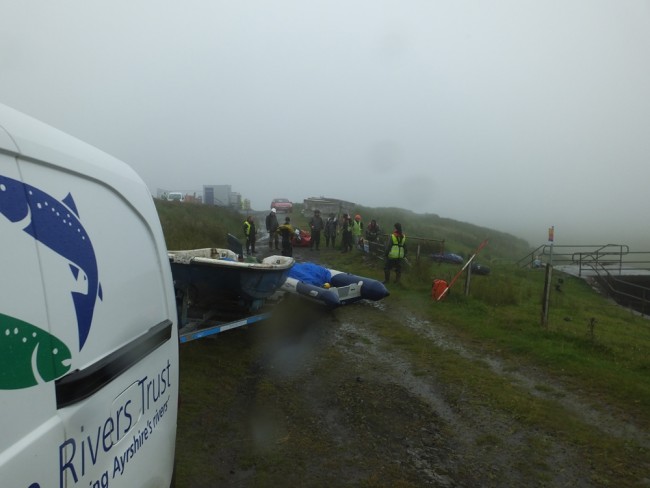 The end of the day and the weather was miserable but at least the job was done on time and with no disasters.

Any fish remaining will have to take their chances in the Pundeavon Burn once the dam is breached. We have offered to electrofish any that appear in the draw down channel at a later date. I am satisfied that we have cleared the vast majority of fish from the reservoir and that’s a much better outcome than leaving them to suffer in a muddy puddle. The rest of the afternoon was spent recovering the boats and equipment and then moving the fish to Kilbirnie Loch (under license). Hopefully the trout will manage to  evade the pike in their new home long enough to grow bigger in a much richer and more productive environment. I’m sure many will. 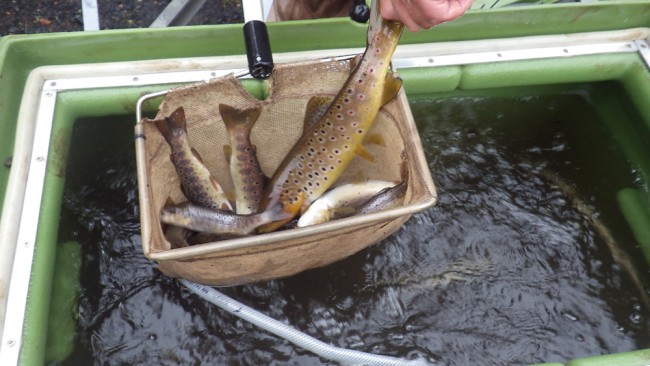 A final health check and count revealed approximately 1200 wild trout were caught and safely relocated to Kilbirnie Loch. This was the largest trout we captured and was around 13″ in length 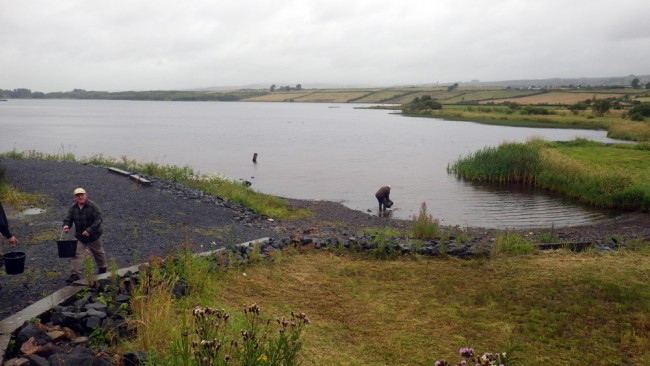 The last task of the day; stocking Kilbirmnie Loch with the catch.