The new deflector appears to have helped slightly but more needs done in my opinion. I filmed the top baffle in the fish pass for an hour and a quarter this afternoon in a falling water when salmon would normally be expected to be running and indeed were, with a steady stream of fish showing at Anderson’s just 50m downstream of the ladder. However, very very few fish moved through the ladder during filming  so I am concerned that they are still put off from moving through the structure when anglers traditionally expect fresh fish to move.

When I say very few fish moved through the ladder, in fact only one went through and was caught clearly on the camera. This just isn’t acceptable. Last year I disagreed with SEPA over when fish eventually moved through the pass and in my opinion, the level when salmon started to move was lower than when SEPA thought they were moving. Todays filming would indicate that I was correct and despite minor improvement at the entrance as a result of the new deflector, salmon still aren’t moving freely across an adequate range of flow. The fish pass is supposed to work and allow migration to continue between the Q90 and Q10 levels (or put simply, for 80% of the annual flow range). Very obviously, they don’t achieve this at Catrine and water levels this evening when I left, had fallen back to below 0.4m on the hydrograph.

The area between the green lines on the hydrograph represents the time I was filming in the fish ladder this afternoon.

The problem wasn’t a lack of salmon as fish after fish had been seen leaping at Anderson’s since about mid day and many made it over that I’m aware of. 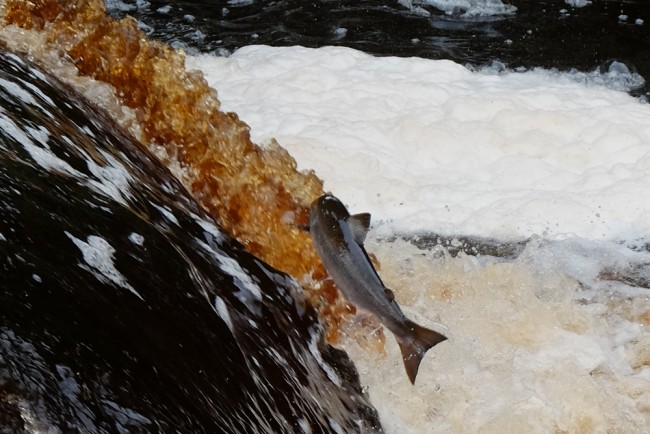 A clean fish straight from the sea.

I returned to the dam at  around 7.45pm and fish were still running Anderson’s. I again stuck a camera in the pass but haven’t yet downloaded the video to see if it is  useable or if indeed salmon were moving through. Light was fading fast and I only filmed for 1/2 an hour and it may not be good enough to see fish in the ladder.

Here’s some shots of salmon leaping at Anderson’s today. What was encouraging was the numbers of fish I saw and many were clean that must have entered the river today. Most were grilse but occasionally a larger fish would show. 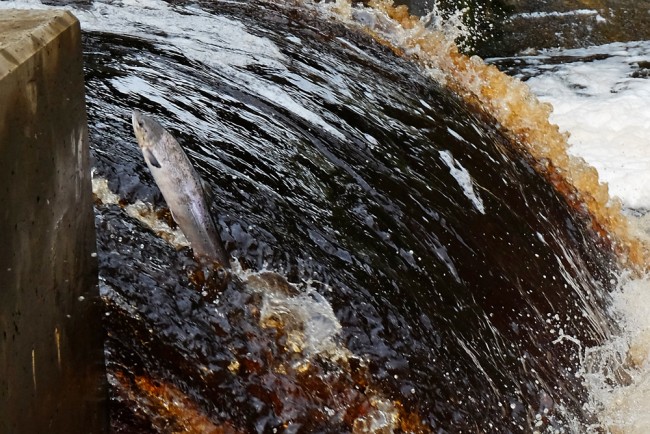 this fish was on it’s way over. 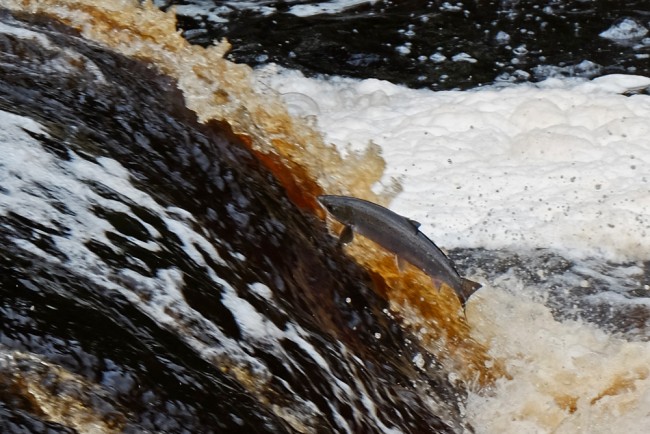 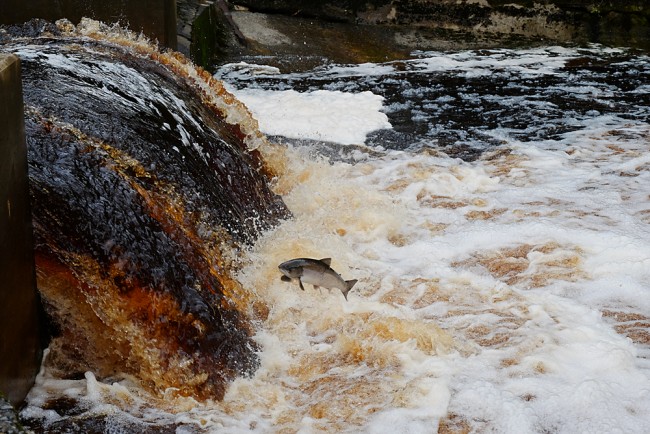 Of course some fish took more than one attempt to get over Anderson’s but without a doubt, the modifications to this part of the dam has improved its passibility.

I also video salmon at Anderson’s and put together a short clip. Follow this link to youtube to watch. http://youtu.be/lxdVaql8Q-4