Rather out of the ordinary for ART, this morning saw us visiting a coastal burn in South Ayrshire beyond the Stinchar Valley and adjacent to the water of App. Galloway Fisheries Trust have been dealing with contractors and Scottish Power recently at a site where the new Irish inter connector comes ashore in South Ayrshire and immediately crosses the Ballochdowan Burn at Currarie Port. 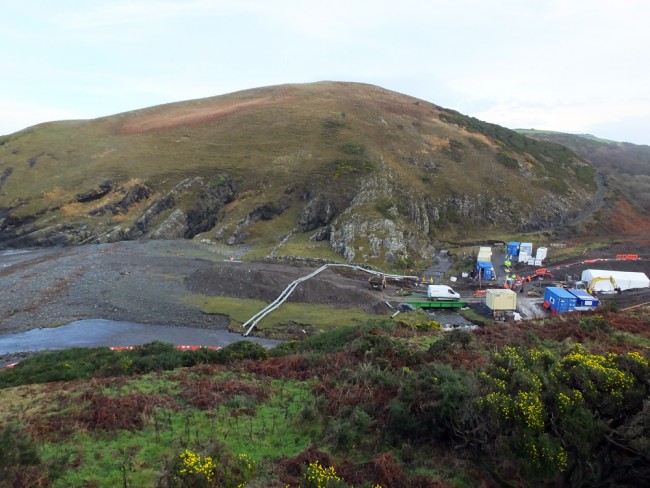 GFT had asked our assistance to remove all fish from within the site in advance of the power cable being laid across the burn. We were happy to oblige and Muir and myself set off early into heavy rain and mist to find this burn and new fishing site. 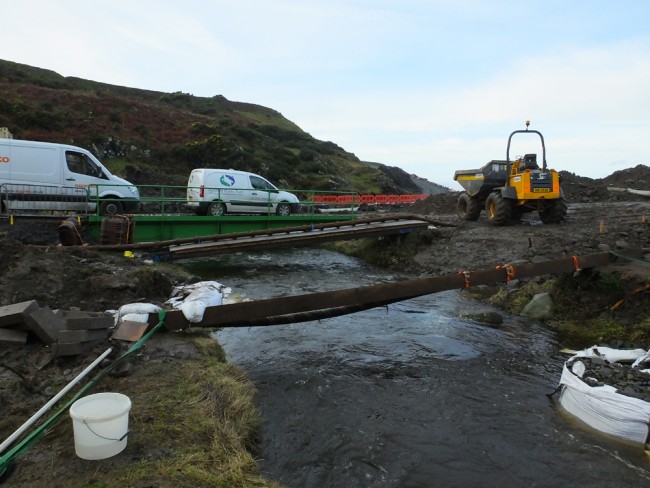 The cable crossing is immediately upstream of the bridge and all fish were removed from the area. By the end of the day a trench will have been dug and the cable installed and backfilled.

We arrived bang on time and after quick introductions we set about removing the few fish that were there. They were released a short distance upstream and work commenced to lay the pipe. We left satisfied that we had done the necessary and headed back to the familiar territory of the River Stinchar. Overnight, heavy rain had fallen and the burns and river were rising fast. Too fast for our purposes as we had intended to see if there was any spawning activity underway but it was obvious that there was no chance we would see anything today.

We hastily reassessed the plan and decided to check a few areas of concern that we had identified during electrofishing surveys earlier this year. We revisited the Docherneil Burn where we had previously found sewage fungus coating the bed. 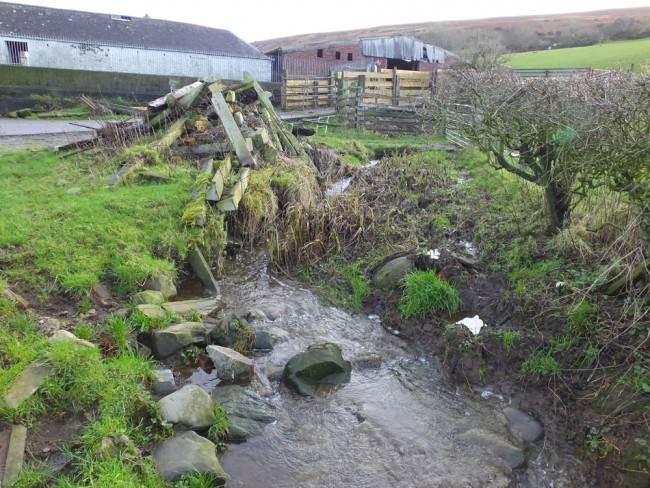 The Docherniel Burn where sewage fungus coats the burn once again. This has again been reported to SEPA for their immediate attention

This had been reported to SEPA and the situation improved following their intervention but our experience is such that we never assume the problems are solved as frequently these situations revert back to a state of pollution. Yet again our suspicions were proved correct and the Docherniel was once again in a very poor condition with sewage fungus obvious. This has again been reported to SEPA and I hope this time they will force a more permanent improvement.

We headed to the Assel where water quality problems have plagued this wee catchment and the lower Stinchar as a result of various inputs to the burn. Again, we found a very poor situation when we arrived at the confluence with the Wee Stinchar. We checked at the confluence with the burn  at Kinclair Viaduct where contractors had been working this summer and it was found to be clear. Further upstream, the Dinvin Burn at Daldowie that had previously been responsible for silt from the wind farm development was again clear, but the problem was still evident and we continued upstream. The burn at Laggan bridge was dirty and this will be reported to SEPA in the morning. The main Assel was still dirty so we continued upstream to the quarry but here, water quality was good so we turned back to the Barbae Burn  and headed to the entrance to the new but now disused quarry. This was again dirty but it stemmed from further upstream where contractors were laying cables for the wind farm along the roadside. I spoke to the foreman and he showed me the worksite and we couldn’t pinpoint any particular problems but he did indicate his concerns over the roadside ditches that were blocked and full of water. I will contact SEPA and the main contractor tomorrow to discuss this tomorrow as my instinct tells me this may be linked to the colour we saw downstream. 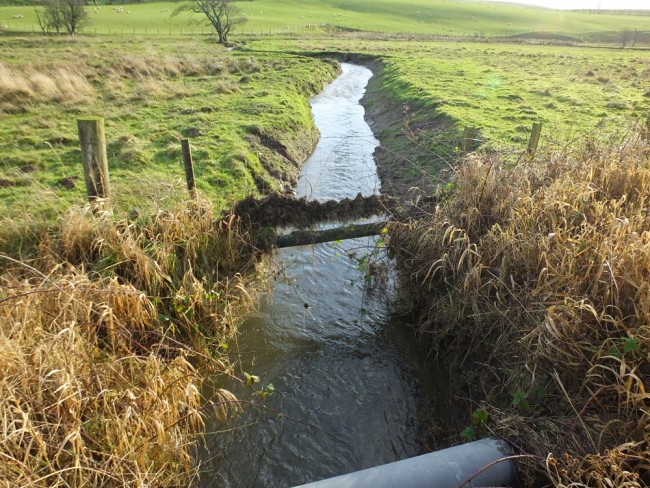 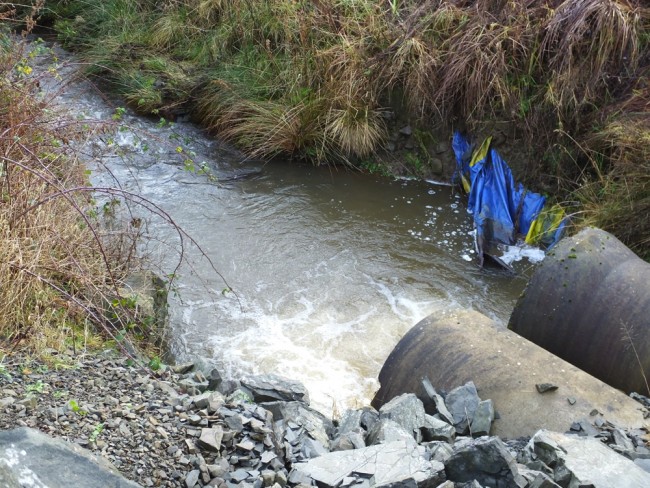 As light faded we headed back to the upper stinter to check a pipe discharge on the Balligmorrie Burn and found it to be less than satisfactory. This has been addressed by ourselves and hopefully the problem will be rectified immediately. 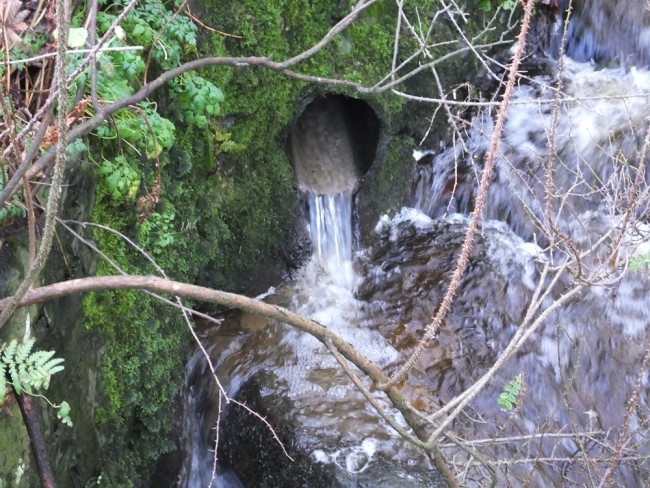 Another damaging discharge in the Stinchar catchment, this time at Balligmorrie Burn. This has been attended to without having to go through SEPA.

The Stinchar has the least intensive agriculture of all the Ayrshire catchments and the lowest industrial activity, yet in just a few hours we found several issues that we believe reduce spawning success and survival. Spawning is imminent so having these inputs rectified immediately is essential. With all the 4 southern rivers in the county suffering from poorer juvenile results this year, we have to find a way to get those that can to improve our water quality to do so and keep it good. With marine survival less than good, we need our fresh water environment to be as productive as possible. We can’t do this on our own and need anglers and the public to assist by reporting problems to both SEPA on (01292) 294000 and ourselves.

Yesterday we reported severe pollution on the Culroy Burn on the Doon and the day before on the Gower Water, an important spawning area on the Irvine. Last week we came across several problems on the Irvine at Galston including newly constructed barriers to migration and water quality issues. We’ve reported our concerns on each incident to SEPA and await updates. 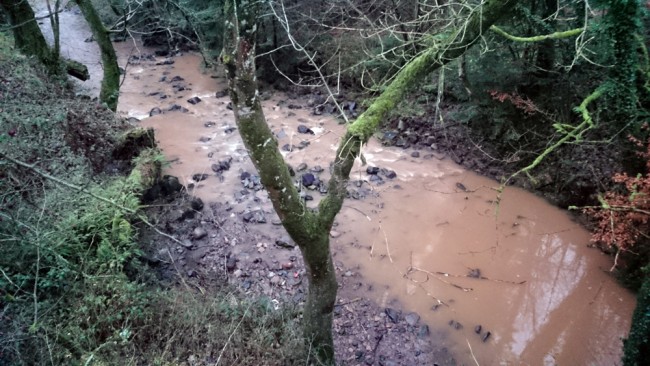 Pollution on the Culroy yesterday. This was reported to SEPA.

We also dropped into the Laggansarroch Viaduct site to see how this was holding up after the works to the banks last year. There has been considerable criticism of this work and I’ll not go over this here as a meeting to discuss solutions is pending. We did however come across a blockage on the Oak Wood Burn (unnamed) so Muir and I cleared the blockage as sea trout and possibly an occasional salmon may access this to spawn once water temperatures drop. 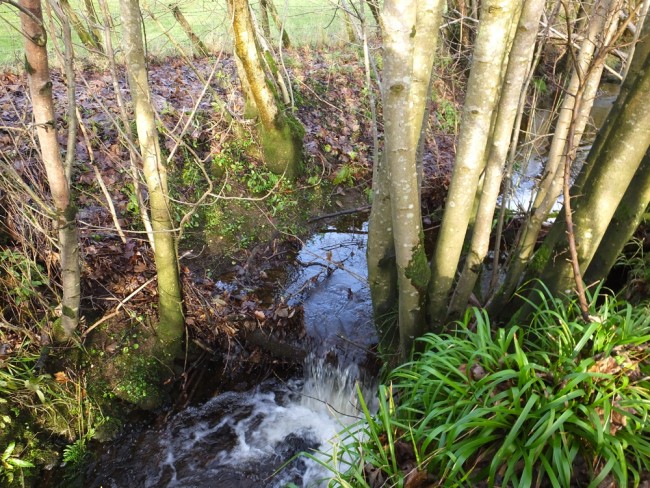 Complete blockages to fish passage on a small unnamed burn at Laggansarrock viaduct. 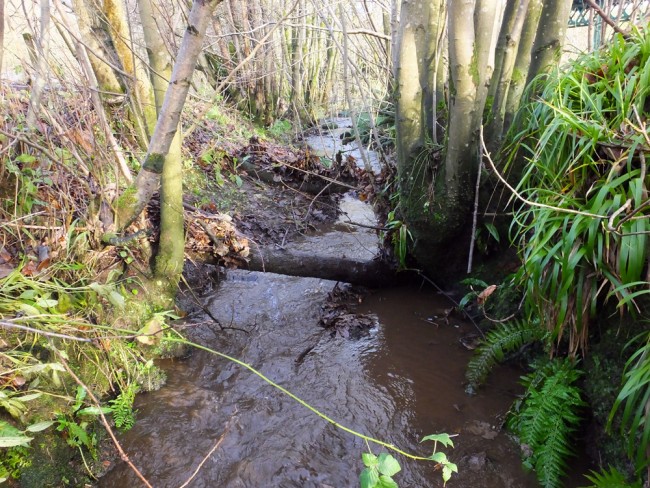 5 minutes after Muir and I set about clearing the blockages, fish will now be able to spawn in the lower reaches of this burn in the next few weeks. We may ask Struan to remove these fallen trees that cause the build up as he passed his chainsaw course in the last week.