While across Ayrshire, floods on the 30th December reached incredible and often record levels, we have suffered almost constant spate conditions since the middle of October and only recently have water levels dropped back to more normal winter levels. Spawning will undoubtedly have been impacted as salmon and trout struggled to find suitable areas and flow conditions in which to lay their eggs. Some of the reds that were completed will have been lost due to redd wash out and indeed, we have had reports of salmon eggs being found amongst debris stuck on fences in the upper Stinchar. Massive gravel shifts have occurred and pools that once were deep are now shallow and vice a versa. Where huge deposits of gravel have occurred, this can lead to further flooding where the channel volume/capacity has reduced.

SEPA has provided guidance on how this can be addressed but in most cases advice should be sought from the local office. We won’t know the full impact of these gravel movements and spates until we assess juvenile fry and parr stocks in the summer of 2016 but we are aware that that many young fish were washed up in fields and lost. It’s very worrying but salmon and trout have survived massive spates before and they will this although the impact of 2015 flooding may be felt for several generations. It is really too early to say more.

However, we have been looking at damage that occurred over the last few months and it was interesting to see that some areas were damaged by severe floods ahead of the 30th December record spates. Some burns suffered larger floods than during the big spates as orographic rainfall patterns across catchments isn’t normally uniform. The Beoch and Culroy Burns seemed to experience a huge spate at the end of November that was greater than that of the 30th December.

Yesterday we attended a meeting near Beoch on the Culroy catchment to offer some advice to a landowner who’s access road is threatened. This burn suffered a huge spate at the end of November that washed out trees and banking along it’s length. Some of the work that the Trust undertook for the Board to stabilise bankings further downstream was damaged too and will need some further attention but not all is lost and we noticed that gravel has been scoured and cleaned and spawning areas improved. We will reassess what has worked and how to overcome failures over the coming months. It is impossible to be certain of results when working in rivers and of course, nature can throw a spanner in the works at any time. 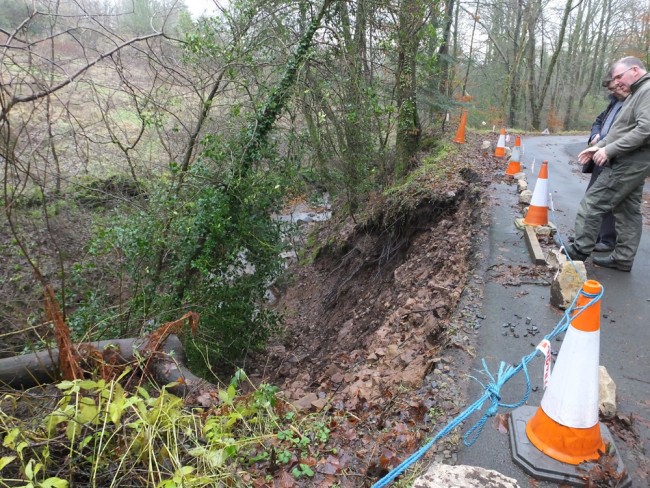 Stuart discussing the necessary work to stabilise this major landslide that threatens a road near Beoch. Contractors will be on site soon as this repair can’t wait. 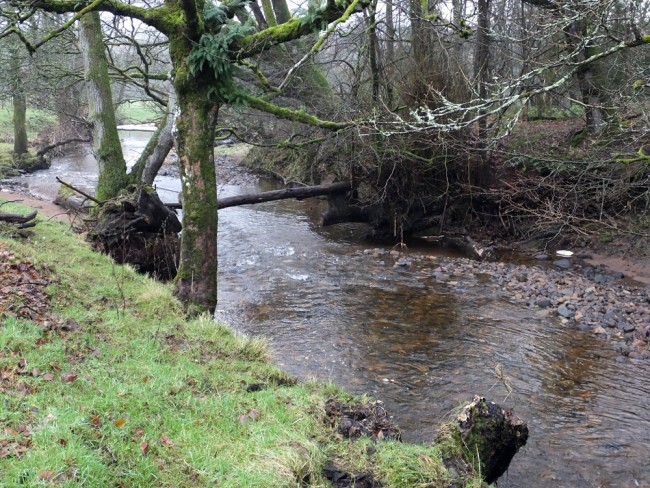 This above photo shows where the Trust made alterations to improve spawning gravels and reduce erosion on the Culroy. What we’ve found is that the gravel has been cleaned and erosion reduced with better spawning habitat being created. Deposition is now occurring along a previously eroding bank and this will revegetate over the coming summer. The flow has shifted back to the centre of the burn and this will reduce bank erosion immediately downstream. 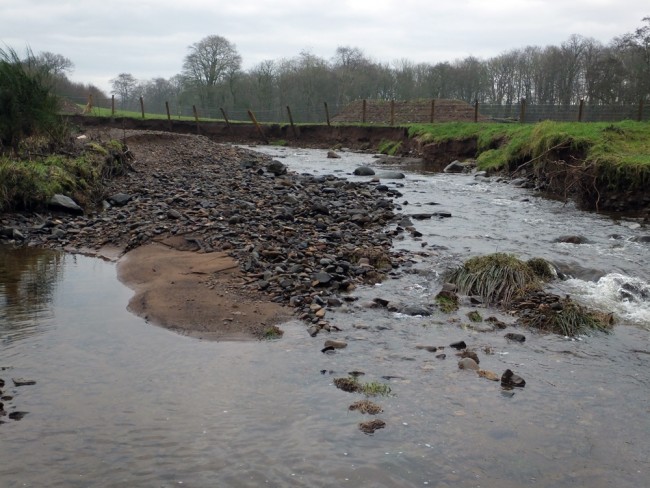 Not everything was a success and this bank continued to erode and the new fence will need a repair to protect it. Unfortunately, a large tree came down the burn in the November flood and ripped out a large hole on the regraded bank. Since the initial damage occurred, the constant high water has led to most of the regraded bank being lost. We will find a solution for this and expect a flood alleviation channel as we originally wished to create will be opened at some point after May. SEPA specialists weren’t keen on this solution however it would have prevented most of this damage by reducing the flow and pressure on this bank. As there is an old channel obvious, we will now look to opening this to prevent further damage occurring and it won’t require any in stream works. It will be a high flow channel that will relieve pressure in extreme conditions. 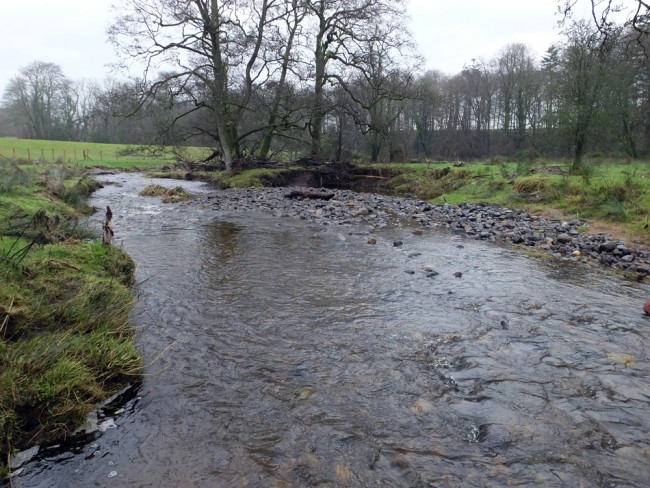 This area was successfully protected and deposition has occurred against a rapidly eroding bank, thereby protecting it from further damage. In time this area will vegetate and stabilise. Gravel has been cleaned and spawning opportunities have improved. We will shortly be planting trees to further improve the results.

Elsewhere in the Doon catchment, on the Muck Water at Dalmellington, floods washed out the very popular footpath along the burn. We met with Craigengillan owner Mark Gibson to discuss the best approach and find an immediate solution to the problem. This burn has been heavily modified and in fact, 100 years ago this year, it was straightened and moved to allow an airfield to be built. The burn is attempting to cut back to a more natural course and in the lower reaches, it  is becoming increasingly mobile. With that mobility develops more interesting habit that is more attractive to fish, both for spawning and for juveniles. We have plans to add boulders to the straightened area and had agreed with the Board to progress with this this year. In light of the damage that occurred recently, we may (with support of the landowner) consider a  more dynamic solution that works with nature. Initially we will seek an immediate repair to the footpath as it is extremely well used and the damage makes it difficult for some to pass along it. Thereafter we will take advice from a hydrologist to come up with a longer term solution for the benefit of fish and habitat. 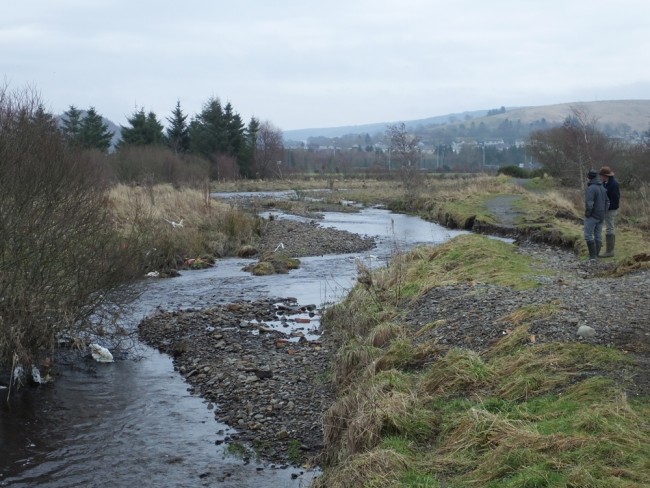 The Muck Water at Dalmellington where the footpath has been washed away and the burn threatened to cut a new course towards Bogton Loch. This habitat is changing rapidly and it appears to be improving in the lower reaches. 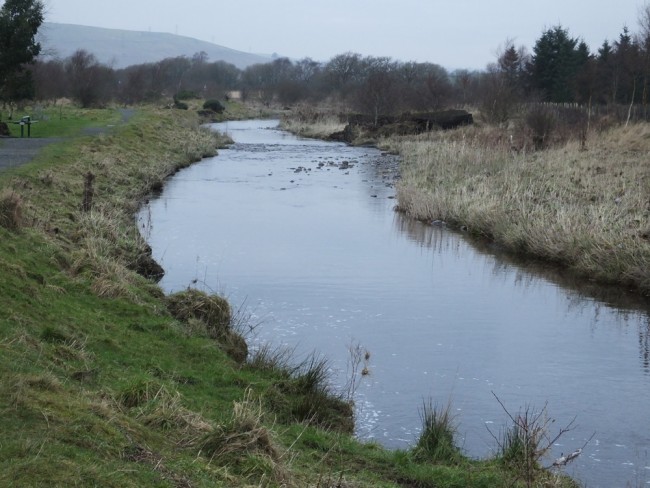 Featureless area in the muck Water that is shallowing as a result of gravel movements. Gravel bids up due to a loss of energy in the flow. The burn is uniform, over wide and lacks cover for juvenile salmon and trout. It was straightened 100 years ago but is slowly attempting to revert back to a more natural and mobile course. As it’s over wide, it lacks the necessary  velocity to allow natural restoration to take place at a reasonable rate. 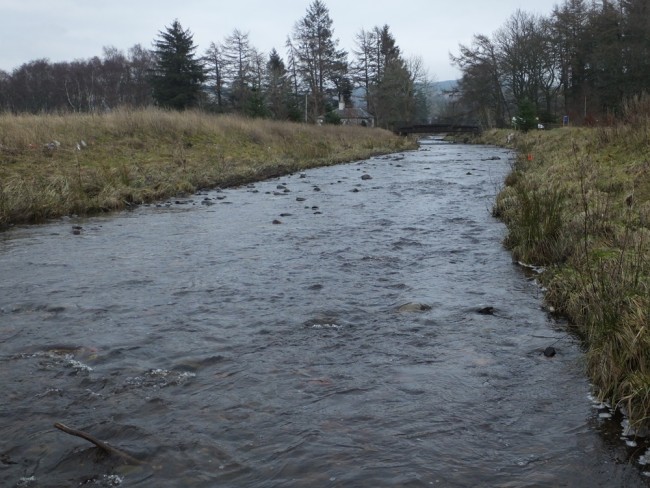 Over 10 years ago, the Trust created deflectors designed to encourage scour and improve flow patterns in this stretch. While these may have brought minor improvements, they haven’t worked as well as expected and could be improved further by adding more mass to the deflectors (boulders). This would improve their performance in higher flows by increasing velocity and scour. Adding more boulders across this area will also increase juvenile cover which currently is lacking. This work is planned for this year but we may delay it until an assessment by a hydrologist/morphologist can be completed.

While not all this news is good news, lessons are being learned and the ambition of the Trust, DSFB  and landowners is to make improvements wherever possible. Anglers often look for immediate improvement but of course where problems are 100 years or more in the making, the solutions shouldn’t be expected to be instant. By addressing known issues in a pragmatic but informed and carefully considered way, we hope that the improvements will be sustainable in the longer term.