Another day and another job. This time it was placing suitable boulders in the Muck Water near Dalmellington to improve juvenile habitat in the burn which was modified and moved 100 years ago. The instream habitat lacked diversity and large substrate material (boulders) in the stretch we were concerned with. The cobble and pebble substrates provided little fish cover and the pools had few trout or salmon in them. Further upstream, juvenile numbers are respectable and we feel by improving this habitat, we should be able to increase output from this tributary of the Doon. Of course, had it not been altered 100 years ago, it probably wouldn’t have required any assistance from us. 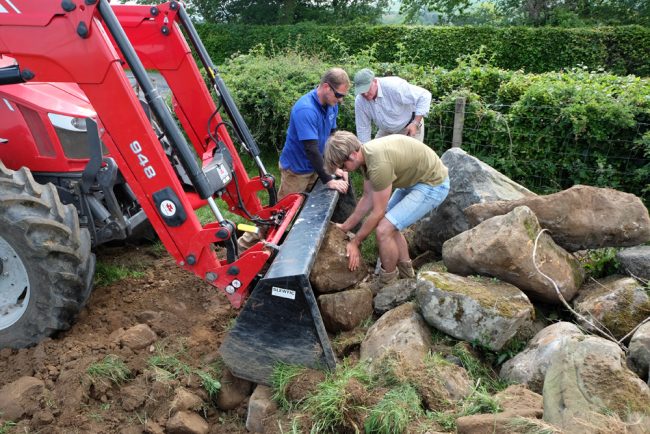 The bigger the better for this job 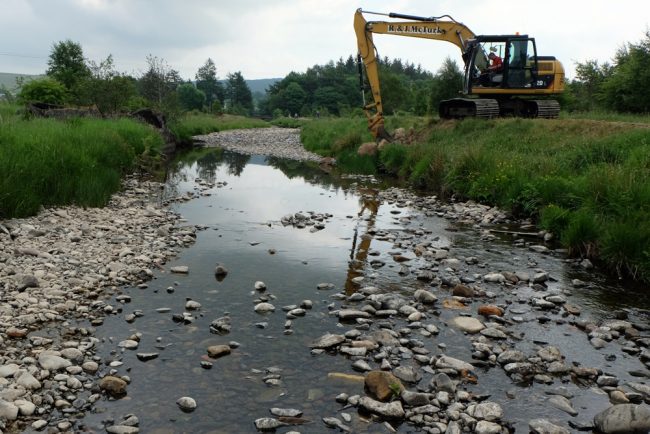 Sorting boulders before they were installed

Under SEPA’s General Binding Rules (GBR6), we decided with financial support from the DDSFB to attempt to make some improvement by installing boulders that should be large enough to remain in place and bring a degree of diversity to what was otherwise a relatively sterile habitat.  Placing boulders requires care to ensure that flows aren’t directed onto banks leading to erosion or damage occurs to spawning areas but it is generally recognised that this is the least risky type of habitat enhancement work used in fishery management. By orientating boulders in a certain way, it is possible to deflect flows or cause scour around and deposition behind them as happens in natural systems. As the boulders were mainly arranged in groups, they should provide fry and parr cover, something that was lacking in this exposed stretch and that was our main aim. 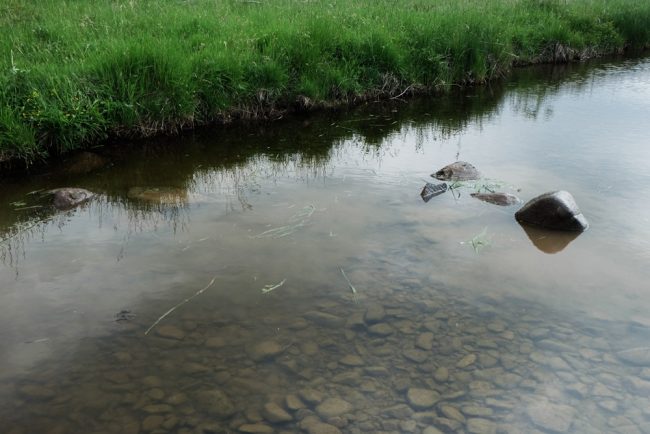 Two clusters of boulders in place. They are wriggled and pushed into the substrate to help them retain their position during spates. 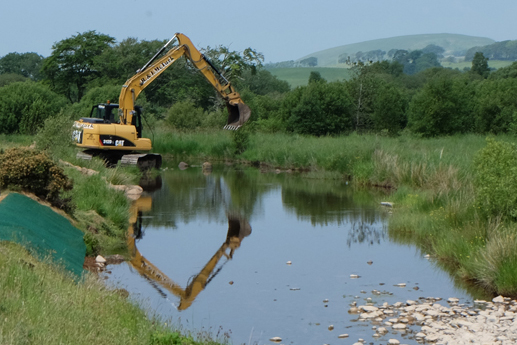 The advantage of using a large excavator was that boulders were placed either from the bank or dry gravel bars. 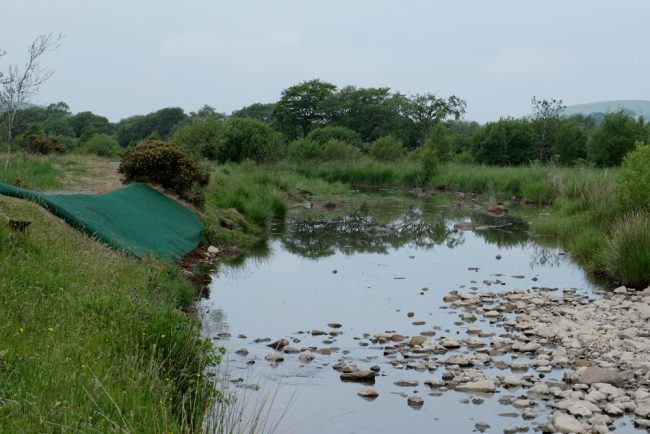 More or less the same view as the previous photo but after the boulders were placed.

Working mainly from the left bank, the excavator was able to place the boulders exactly where we wanted them and to ensure they wouldn’t move in the next spate, they were ‘wriggled’ into the bed and should hold position. Placed boulders shouldn’t occupy more than 10% of the channel width and we were careful not to exceed this.

At the same time, the contractors repaired sections of the footpath and riverbank that were washed out during winter spates. These too were delivered under GBR’s that allow limited reinstatement of flood damaged banks. A permeable membrane was stretched and pinned on top of the new bank and grass seeded. The grass should develop quickly holding the bank and membrane in place. It will be interesting to see how this specialist geotextile performs as we have other areas that may benefit from this. 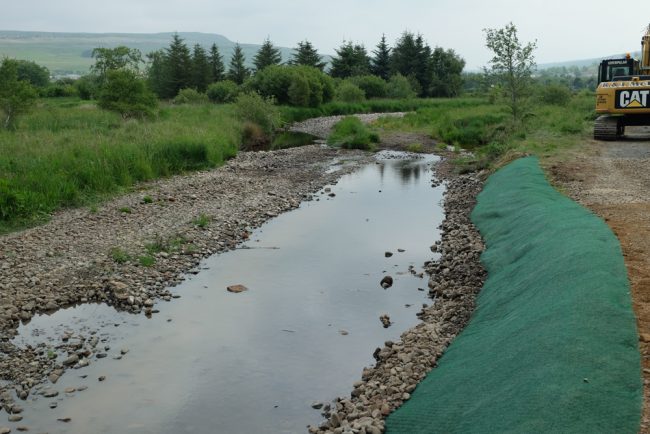 Contractors pinned the geotextile on top of soil and ‘as dug’ rock (mixed size from small to large) that was used to rebuild the bank. Hopefully the grass seed will germinate quickly and hold the bank together. 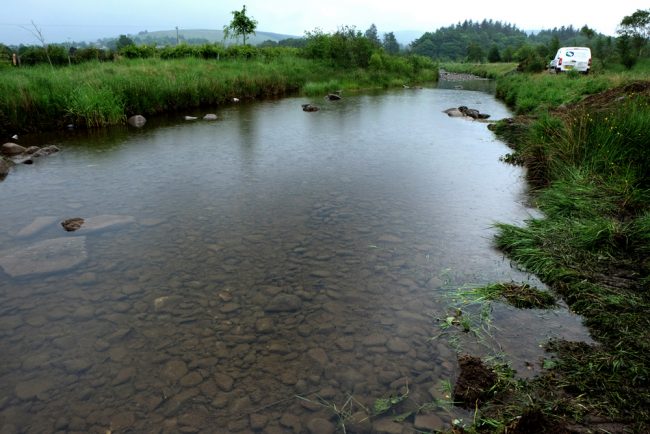 The relatively sterile and uniform cobble habitat is easily seen in this image. The boulder groups will at least offer some cover to parr. In fact, just one day after they were installed we saw several parr moving between boulders. These fish were there before in the margins and under overhanging banks but good to see they are exploring new features in the habitat. 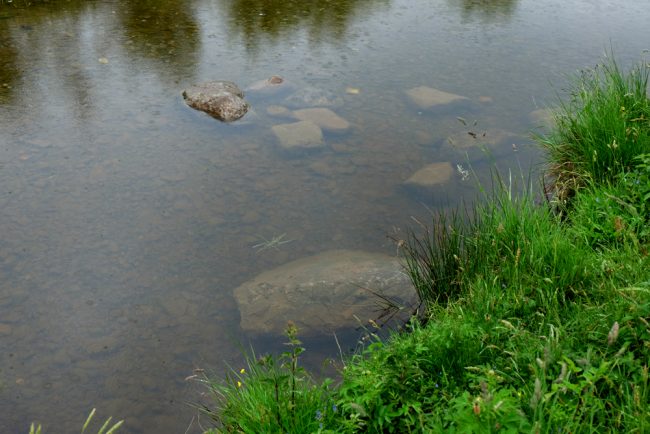 Instant improvement in fish cover. The largest boulder looks small now it’s in place but it was a substantial rock that should hold fast in even the largest spates..

Our thanks to Craigengillan Estate and the River Doon DSFB for enabling this work. Also thanks to Stanley Brodie for the boulders. Lets hope we all see improvements and we will monitor this regularly in the coming year or two. The residents of Dalmellington will be relieved that their path has been repaired. By all accounts, around 60,000 people walk this path annually (there is a footfall counter under it somewhere).