On a bitterly cold day we headed back to Loch Doon this morning to continue our pH monitoring and tagging project. It wasn’t ideal conditions to be out in but we had to be at Glenlee Power Station near StJohn’s Town of Dalry in the afternoon to attend an annual induction course that had been arranged at short notice to allow us to quickly clean the Vaki counter at Loch Doon that has become blocked with debris. This can’t wait as we have to ensure all the counters are working ahead of the smolt run starting.

It was  snowing at Loch Doon this morning and a biting wind cut through all our layers of weather gear. Fingertips hurt with the cold….it was that kind of day. Muir and Struan had the unenviable task of heading out across tussocks to record pH at several sites on the Eglin lane and BlackGarple before taking more readings from Whitespout and Carrick Lanes on the way back to the van. Gillian and I headed to Carrick Lane to collect salmon smolts for tagging. I’m not sure which was the better job in weather like this but I expect tramping moorland keep them warm as I froze when plodding around in the river up to my nether regions. 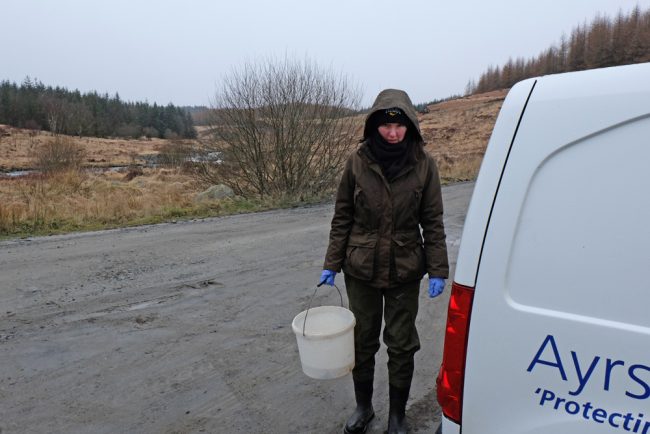 Gillian with the fish and feeling cold.

We didn’t expect to find many salmon and we didn’t however, we did find a fairly large parr that we suspect may be a naturally produced fish but until we’ve read the scales to age it, we can’t be certain. I expect this will smolt this year but there was no sign of smotification starting yet. The other salmon we found was a 1+ parr and it had a clipped adipose indicating that it was one of the translocated fish that we placed there last season as a fry. It measured 82mm and that indicates slow growth compared to further down the catchment but that’s to be expected in the harsh and unproductive environment it is surviving in. At this time last season, we also recorded a small 1+ salmon that had definitely been the product of natural recruitment in Carrick Lane so there is clearly some scope for improvement and hope that we can increase the population in this part of the catchment. That’s what this project is all about at the end of the day. It is too early in the project to announce what we can do to address the problems but we will continue to gather data and monitor fish presence and movements through the loch and dam. Previous attempts to kick start or improve natural spawning by introducing hatchery fry to the Carrick Lane can’t really be seen to have worked to any extent although it is possible that some salmon returning to the loch are as a result of stocking but numbers are so few, it seems more likely that wild fish are responsible for continuing to stock these Lanes at very low densities. 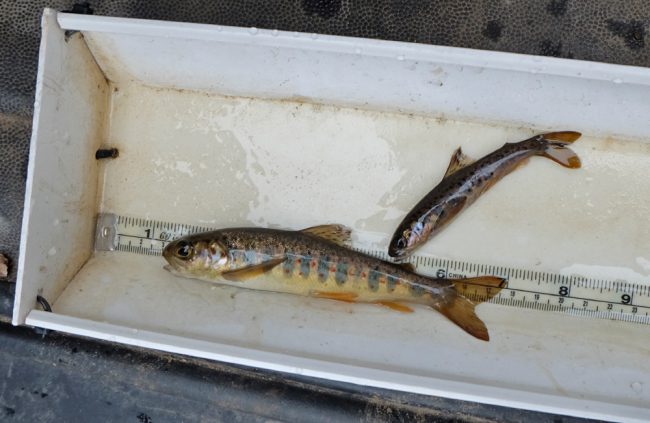 Two salmon from Carrick Lane. The smaller fish has been adipose clipped and identifies it as a wild fish translocated by ourselves to this location last year to ensure we have future smolts to monitor. The larger parr is likely to be of natural spawning and we’ve taken scales to allow us to determine its age and hopefully rule out the possibility that this is from the last year when salmon were stocked from the hatchery. It does seem unlikely but we will check before making that call. It would be great to have another confirmed naturally produced fish from this burn. Once the larger fish was tagged it was also clipped and we hope to record it going through the dam later this year if it does smolt. 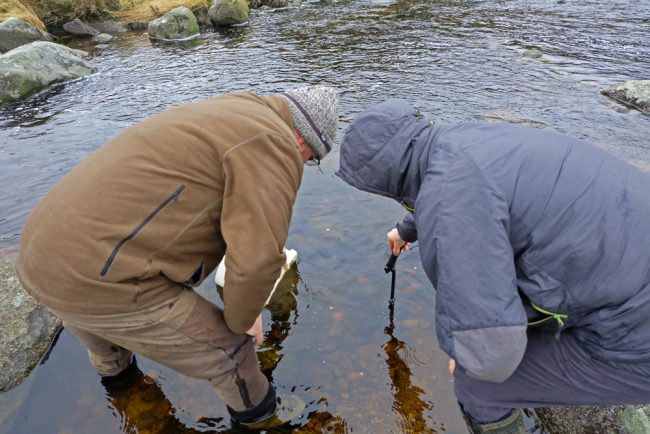 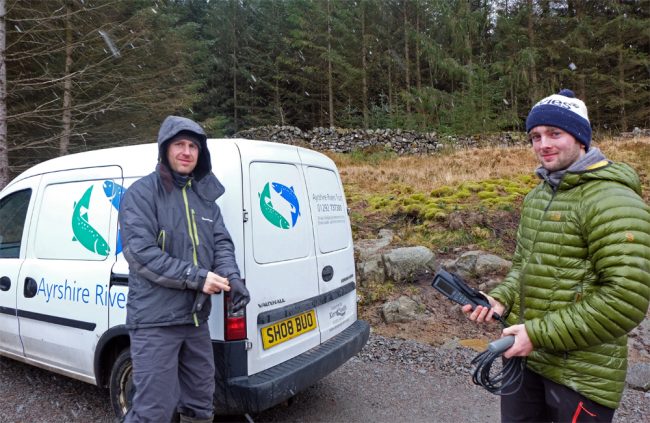 Meanwhile Stuan and Muir returned with the data from the burns and unsurprisingly pH readings today were generally on the low side (moderately to highly acidic). There were a few surprises within the results but nothing that would raise an eyebrow too high. On the way to the main road as we headed to Glenlee, samples were collected from the North shore burns and these were less acidic on the whole. Further samples were taken on the Muck, Sillyhole, Errif, Carsphairn Lane and another unnamed burn and these were considerably less acidic  than elsewhere we sampled. Piecing this all together takes time and we’ve still got a few more round of sampling to perform so can’t draw conclusions yet. Apart from the dog disappearing off into the forestry and ignoring my calls, this was an enjoyable day out. 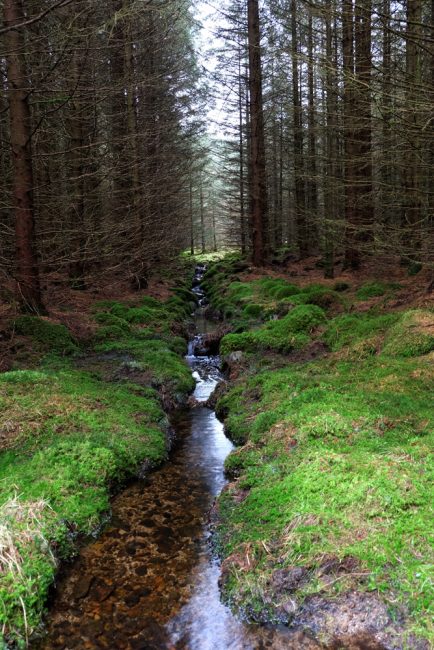 I think this was the Polrobin Burn but will need to check the GPS. It was at this point that Brewster took it on himself to disappear into the forestry enjoying himself for about 20 minutes.

The induction course completed and samples gathered, we were all glad to reach the office at the end of a such a cold day. We don’t really mind the weather but do like to moan about it now and again. We will be back there looking to tag more salmon tomorrow after a meeting in Dalmellington in the morning.