We will be hosting a short meeting on Wednesday 21st June 1900 at Minuntion (Minuntion, Pinmore, Girvan, Ayrshire, KA26 0TE) to coordinate volunteer efforts to control invasive weeds on the Stinchar catchment. Anyone who is able to attend and can help with the project are very welcome.

The meeting will focus on making our control efforts as efficient as possible and maximising everyone’s efforts. Many individuals have been controlling Invasive Plant Species since the end of the Carrick Invasive Species Project and have been doing an admirable job. If we have sufficient numbers we would like to hold a couple of balsam bash events, dates for which can be discussed at the meeting.

Thanks to Fiona and Johnny Warrender for allowing us to host the meeting at Minuntion.

Minuntion is at the tip of the arrow, our meeting will be held on the 21st June at 1900. 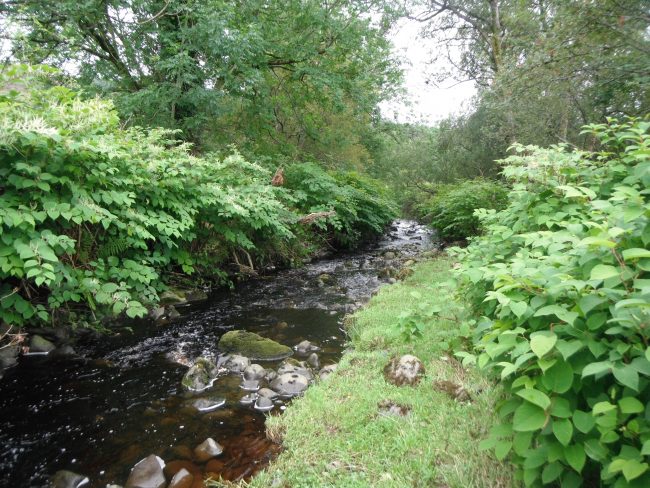 An example of a monoculture of Japanese knotweed on the banks of the Muck …… reducing native biodiversity and hampering access. When these plants die back, the bare banks will be exposed and vulnerable to erosion.

If you are able to attend please email struan@ayrshireriverstrust.org or call the office on 01292 737300.

Tesco has teamed up with Groundwork on its Bags of Help initiative across Scotland. The scheme will see three community groups and projects in each region awarded grants of £12,000, £10,000 and £8,000 – all raised from the 5p bag charge.  greenspace scotland are working with Groundwork to support Scottish communities.

Bags of Help offers community groups and projects in each of Tesco’s 416 regions across the UK a share of revenue generated from the 5p charge levied on single-use carrier bags. The public will now vote in store from 26 September to 9 October on who should receive the £12,000, £10,000 and £8,000 awards. In total, there is over £12.5 million up for grabs.

For further details go to www.tesco.com/bagsofhelp