A different approach to increasing stocks Where to fish after 19mm of rainfall overnight?

19mm of rain fell in Mauchline last night and 18mm at Gadgirth. This seemed to be consistent across much of Ayrshire last night as torrential rain and thunder storms passed over during the wee hours. Consequently, this morning every river and most burns were unfishable (at least using electrofishing survey methods).

We had reports of unusually dirty water on the Girvan so as we were nearby we had a look. To our eyes, this seemed just typical dirty spate conditions in an agricultural catchment. Preventable?  Possibly in part, but unusual? No, sadly we see this all too often. Intensive dairy production, heavy grazing, unfenced margins and bank erosion all contribute to heavy silt loading and dirty spates. That’s not to mention the run off from slurry spreading in poor weather conditions etc.  There may be other factors too but silt loading such as this does lead to reduced water quality and poor spawning success. The Girvan isn’t the only river affected in Ayrshire. The Ayr (including Coyle and Lugar), Doon, Irvine (including Garnock) and Girvan in particular suffer from dirty spates and were identified as being amongst Scotland’s 14 most polluted watercourses by SEPA, the regulator back around 2008. SEPA’s diffuse pollution initiative is designed to address these livestock issues. Not for the benefit of the fish but to protect the bathing waters and beaches from faecal material and bacteria. The fear is that beaches fail water quality standards for bathing with a subsequent impact on tourism.

Our concern lies with the fish and we hate to see preventable sediment inputs polluting our waters and ruining spawning potential. Consequently are working to help District Salmon Fishery Boards  to erect fencing and install green bank engineering wherever we can. This is designed to reduce erosion and silt bringing the desired improvements to water quality. However, we have very limited funding to achieve this but if we did, just imaging what we could achieve. I can’t think of any other organinsation in Ayrshire as proactive when delivering tangiable improvements in our catchments. 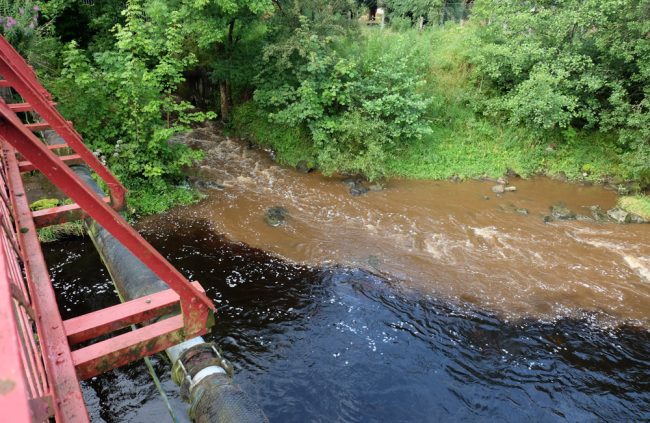 Bogend Burn just a few weeks ago polluting miles of the River Ayr downstream. The Ayr was running clear and at a height that more than a few salmon could still be moving. Anglers were furious to see their Saturday’s fishing ruined through livestock access to a relatively minor burn.

The image below shows the Girvan running dirty while the Toddy burn runs clear. The Toddy Burn rises on a hillside and flows largely through woodland before entering the river. As a result, there’s little livestock pressures and virtually no sediment issues. If only we had more like this. 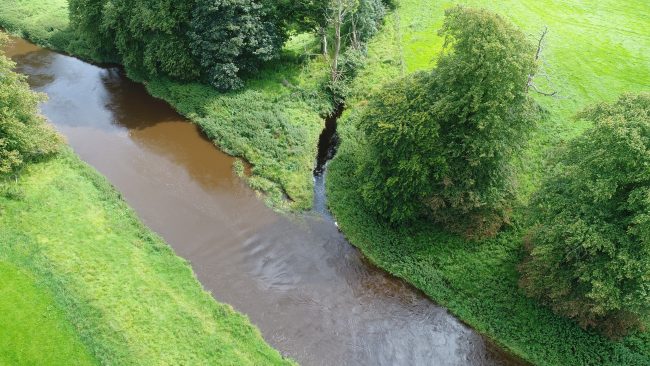 The Toddy Burn in the middle reaches of the Girvan entering a very dirty main river. Livestock pressures on the Toddy Burn are negligible and it shows in water quality. While this burn is dark and peaty, it was running clear without any trace of sediment today.