One aspect of green engineering that is rarely reported is progress following installations. All too often we find encouraging posts on the web or YouTube regarding ambitious plans to stabilise erosion and problem areas on rivers but rarely are these posts followed up with progress reports in years to come.

This often leaves us wondering if the works were successful of if people were most interested in funding and publicising a project while results were perhaps less important. That is probably a bit cynical, but sharing the lessons learned is just as important as sharing the project’s aims and delivery. As we undertake more and more green bank engineering works here in Ayrshire, I’d hate to think that the results were inadequately reported, both in terms of success or failure. One thing for certain is that any green engineering approaches can fail, even those with the best planning and a huge amount of effort. Rivers in spate are a most powerful force that can quickly destroy hard work and well intentioned actions. Couple that with a bit of bad luck, bad timing, poor planning or execution or any other unforeseen influence and disaster and disappointment awaits anyone wearing rose tinted glasses while they perform this type of work. Nothing is certain when you commence river works. 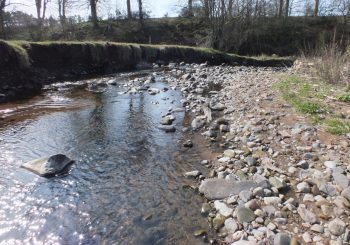 Pre 2015 image of the upper site at Blackbyres that shows the scale of the problem we faced well. The bank was approximately 4′ above the water level, sheer and eroding at an accelerated rate. Valuable agricultural land was disappearing downstream and silt impacted the river bed and suppressed fish populations.

In 2015 with financial support from the River Doon DSFB,  we first attempted to stabilise severe erosion on the Culroy Burn, downstream of Culroy Smiddy. This was leading to heavy suspended sediment loads and accelerated land loss. Not long after we completed the works late in September, hurricane Alice ravaged Ayrshire during November and left our best efforts looking rather a sorry mess. This forced us to revisit the site the following summer after going back to the DSFB with cap in hand, seeking a bit more money to help us make repairs. Most importantly, we learned valuable lessons and perhaps adjusted our expectations of green engineering slightly. Repairs duly made, green engineering measures suitably bolstered, we left the burn to its own devices with hope of success. In reality, I think we have succeeded and when we revisited this stretch today, on the whole our efforts have held up well and the problem bank appears stable, vegetated and no longer eroding.

However, the burn had cut a new bypass channel upstream of the previously eroding bend and effectively there is now a braided channel where once there was scrub and gorse. It isn’t really a problem, but a reaction to natural forces and ever changing river flows. Rivers change their course and no matter regardless if landowners expect that or not. 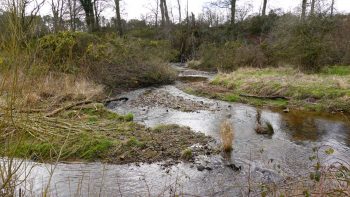 A new channel has opened up reducing pressure on our green engineering and creating diverse habitat with good spawning opportunities. 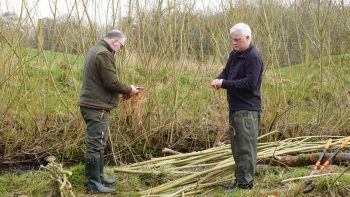 Our new green engineering trainee Ian Jackson (right) taking cuttings and poles from coppiced willow. I’m sure Ian won’t mind us pointing out that you are never too old to learn new skills even if you and the boss are rapidly approaching your 60’s! Managing these green banks for years to come will provide much more material for use elsewhere that will reach maturity long into their retirement years. 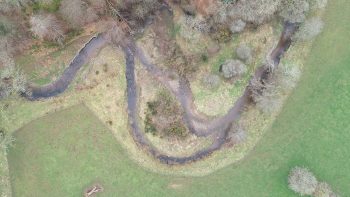 There have been some lovely river gravels exposed that will undoubtedly benefit fish spawning and a much more diverse flow pattern has developed that will suit different life stages of salmon and trout. This is an unexpected but beneficial development.

I’m certain the burn will continue to change its course for years to come during the high energy spates that flow off the Carrick Hills. Perhaps one reason these spates seem to rise with such speed and energy is the altered hill habitat that has been drained for agriculture and the proliferation of conifer plantations within the upper catchment. Rapid surface water run off and drainage quickly reaches the burn that probably used to be released slowly from upland heath and moorland. It’s not uncommon to hear of flash flooding from similar types of catchments and land use.

None the less, our green bank engineering has developed well and will remain in place regardless of where the burn eventually ends up flowing. Today we coppiced some of the willow and added further  cuttings alongside the new braided channel. They should help to slow the changes as they take root but will certainly do no harm. Creating diverse river banks benefits not just fish but mammals and insects too. 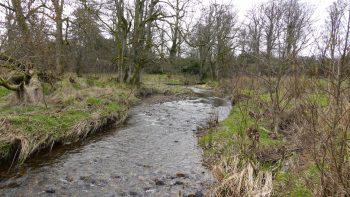 Some of the trees we planted in 2015 and 16 have done very well while others have been damaged by deer and hares. To the righto of this image are alders planted in 2016 on an eroding bank. This too has stabilised and the trees should continue ti well now they are above the height of deer grazing.  We added another 100+ trees today that should help. these provide shade and a Carbon Dioxide sink.

Further upstream at Sauchrie where we commenced additional work to reduce the silt load in this burn in 2017, is also looking quite different these days. We fenced around 400m of  heavily grazed riverbank to ensure a managed grazing regime was established. A small redundant weir was also removed. Trees were planted and little else was necessary other than time for the river to establish more natural flow patterns and bed levels. Whenever you remove weirs, there is always a degree of down-cutting of the river bed, upstream of the weir’s location. This is the slow process of releasing sediment that had accumulated since the weir was built. In this case, some 200 years+  had passed and the bed had risen as gravel was deposited behind the dam. The burn continues to cut down but we feel this is slowing now after around 4 1/2 years. While the burn itself remains shallow, we are hopeful it will remain wet all year round as previously it was prone to drying in summer months as the flow percolated through the built up  gravel.

Again, in the fenced buffers we created,  mammals have damaged many of the trees, in particular we think the culprits are hares and deer.

We planted more bare root trees today and will try to find funds for guards and stakes. However, those that have done well and survived are really stretching for the skies and we even managed to prune a few willow cuttings from some of the larger specimens, which of course we plugged into vacant spots. Even if the burn remains prone to drought in some years, at least we know we have dramatically reduced livestock driven erosion, nutrient inputs and water quality has improved as a result. Trout numbers have increased tremendously with some of the best electrofishing results anywhere in Ayrshire, coming from the downstream areas last year.  Salmon are returning but slowly. This may be due in part to poor marine survival. We will keep monitoring the recovery progress fo years to come.

More details of all this work can be found on our web site blog pages. Just type ‘Culroy Burn’ into the search window and they should appear. 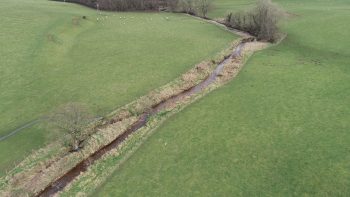 An aerial view of the Sauchrie site where we fenced the burn and removed a small dam in 2017. Compare this to the next image from before the fence was installed. 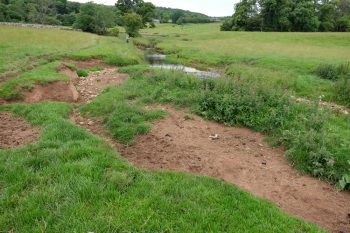 The same stretch of burn prior to fencing when livestock caused erosion and water quality issues.