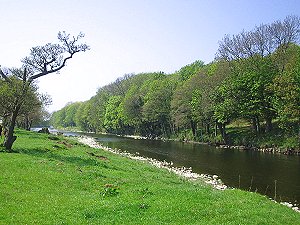 Survey results from 2003 show that of all the major rivers in Ayrshire, the Stinchar supports the highest population densities of juvenile salmon and trout. The number of eels found in annual surveys is also notable, at a time when this species is also facing decline across its range. This is likely to be linked to the low level of urban and industrial development in the catchment, which has meant that habitat and water quality in the Stinchar is generally good, although there are still a number of problems to be addressed.

A detailed habitat survey was completed to full industry standard in 2003, which will help ensure that restoration projects provide maximum benefit to the fish and other wildlife in the Stinchar system.

The survey clearly shows that main impacts on river habitat quality in the Stinchar are commercial coniferous plantations, intensive livestock farming and riverbed excavation. Forestry has resulted in acidification in the headwaters, and more rapid water runoff due to an increased number of drainage channels. Although the Stinchar has always been a spate river due to the steep nature of its catchment, flash floods are increasingly common. These have degraded instream and riparian habitat, and transported large amounts of potential spawning gravel downstream.

Several areas of the upper Stinchar, Duisk River and smaller tributaries have been affected by livestock grazing, which has resulted in extensive bank erosion and siltation. This has reduced spawning gravel quality, and instream cover for fry and parr. ART has produced a detailed analysis of areas which require bankside fencing and tree planting, and is currently working with landowners and farming groups such as FWAG to help the River Stinchar District Salmon Fishery Board improve the worst affected areas.

Compared with other Ayrshire rivers, there are few large point sources of pollution on the Stinchar. However, potential hazards created by farming include sheep dip pens near burns, farm drains and silage pits. Much of the lower Stinchar valley has been dominated by dairy farming including improved pasture for grazing and silage production. In many places improved bankside fencing would help protect the river from agricultural pollution. Other problems include septic tank overflows, as few rural dwellings in the region are linked to mains sewerage.

The lower Stinchar contains no serious obstructions to fish movement, although some fairly large rock weirs have been created for angling purposes. Obstructions on the Duisk include bridge aprons in poor condition, collapsed farm gates and waterfalls. There are waterfalls in the upper reaches of most tributaries on the Stinchar and many steep sections which run down through gorges. The Stinchar Falls, for instance, appear to be impassable upstream. Stocking into some of these inaccessible areas has been carried out in recent years to try and boost production, and this is likely to continue on an annual basis.