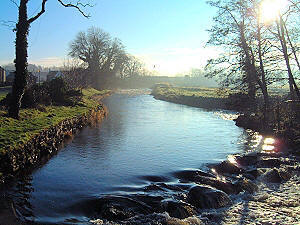 The head waters of the River Doon are the burns and streams feeding Loch Doon from the north edge of the Galloway Forest Park. The river is just over 63 kilometres long (including the Loch) and flows north west close to the town of Dalmellington, through the villages of Patna and Dalrymple before entering the Firth of Clyde just south of Ayr.

The loch has been dammed to supply and store water for the Galloway Hydro-electric power. There is a net loss of water to the system although there is a compensation flow agreement which maintains water quality and flow levels throughout the year.

The river has a catchment area of 324 square kilometres. The main land uses are rough grassland, improved grassland and woodland, the majority of which consists of conifer plantations. The only significant industry is open cast coal mining in the vicinity of Dalmellington.

The geology of the Doon catchment varies from the granite headwater hills to the limestone coal measures in the middle reaches. Water chemistry mirrors the geology ranging from low productivity and intermittent acidic conditions in the upper tributaries to the highly productive, alkaline tributaries downstream of Dalmellington.