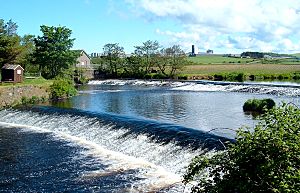 The source of the River Girvan is Loch Girvan Eye, situated on the slopes of the Shalloch of Minnoch in the Galloway Hills, and only half a mile from the source of the Stinchar. The Girvan then flows through Lochs Cornish, Skelloch and Bradan, Ayrshire’s major water supply reservoir, before making a broad sweep north close to the villages of Straiton and Kirkmichael and then south-west past Crosshill and Dailly to reach the sea at Girvan. Upstream of Kirkmichael the Girvan is quite fast flowing with many rocky turbulent sections, whilst downstream the river has a more pastoral character with long pools interspersed with riffles.

The Girvan has a catchment area of approximately 250km2, considerably smaller than the neighbouring Doon and Stinchar. There are a number of tributaries including the Palmullan, Lamdoughty, Dyrock, Barlewan, Lindsayston and Penwhapple burns. The main land uses in the upper reaches are commercial forestry and rough grazing. In the lower reaches there is more intensive agriculture with very productive arable land along the coastal strip. There are a number of settlements along the river, mostly small villages, but also larger towns such as Maybole, all of which discharge treated sewage into the river. Despite that water quality is generally good with a range of invertebrates present, even in the lower reaches.

The underlying hard geology of the River Girvan is complex with limestone and sandstone dominant. There are several old limekilns in the area and old coal mines in the Dailly area. In 1979 there was a major pollution incident when groundwater from the abandoned Dalquharran mine at Dailly upwelled killing everything in the lower reaches of the river. This pollution incident is still considered to be one of the worst recorded in Scotland and the impact on salmon catches can be clearly seen in the catch return graphs.

The River Girvan is an excellent salmon and trout fishery with improving returns.