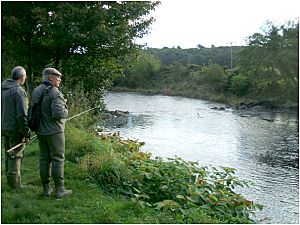 The River Stinchar has its headwaters in the Carrick Forest to the north of the Galloway Forest Park, only one kilometre from the source of the River Girvan. It has a main drainage course of 54km and initially flows north but for the majority of its length flows south-west via Barr, Pinwherry and Colmonell, finally entering the sea at Ballantrae.

The river has a catchment area of 314 sq km, which includes the main tributaries of the Muck Water, the Duisk River, Water of Assel and the Water of Tig. The upper reaches of nearly all the tributaries have experienced rapid forestry development over the past twenty years. Forestry, hill grazing and agriculture are the main land uses in the Stinchar catchment which has a low human population density and very little industry.

The geology of the Stinchar catchment is relatively uniform and is dominated by sedimentary greywacke. Knockdolian Hill in the lower catchment is formed by a volcanic outcrop and the burns draining this area have a higher pH than those on the opposite side of the river.  The river main stem of the river runs through a relatively low lying valley with tributaries draining steep valley sides. The maximum altitude that salmon can reach naturally is approximately 150m which is much lower than the highest naturally accessible point of the River Ayr which is at 300m altitude.

Water quality in the River Stinchar is generally very good with a diverse range of invertebrates present even in the lower reaches.

The River Stinchar is a famous salmon fishery and is renowned for its autumn run, producing fish which are often large. The Salmon Fishery Board of Scotland Report 1887 notes that the “Stinchar, remarkable for its shifting mouth, and for yielding larger salmon than any river of its size in Scotland“. A 62lb salmon was caught in the coastal nets in 1898. The Ballantrae gravel banks at the mouth of the Stinchar are an SSS1 for its nesting bird population and coastal features. There has been a collapse in the sea trout fishery in recent years and they are now rarely caught. River management is carried out by the River Stinchar Salmon Fishery Board with advice and assistance from ART and in cooperation with private riparian owners.