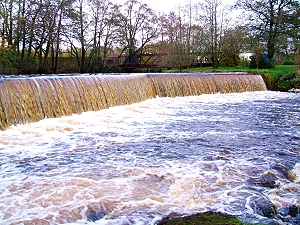 Ayrshire’s second largest river rises above Loudoun Hill on the boundary of East Ayrshire and Lanarkshire. From there it flows for 42km westwards to Irvine Bay on the Firth of Clyde.

It shares an extensive estuary with the River Garnock. This is the only significant estuary in Ayrshire, providing excellent bird habitat.

Principal land uses in the catchment area are agriculture, forestry, and urban development, the largest settlements being Irvine, Kilmarnock, Irvine, Stewarton, Galston, Newmilns and Darvel. The river has been highly modified, particularly where it flows through urban areas, with many weirs, culverts and retaining walls. There is a large flood prevention scheme in development between Hurlford and Galston.

Fishery management is undertaken by the River Irvine Angling Improvement Association and the many active angling clubs.