Blank day on the Culroy

After emptying the van of equipment from the Arran trip and disinfecting waders etc, we headed off to the Culroy Burn on the Doon catchment to electrofish our usual sites and a few new ones too. Results last year weren’t great, in fact, on the whole they were poor but we did find a salmon and a few trout at the new Otterden site below Sauchrie so we hoped for better this year. During the winter, we planted egg boxes in the burn at 3 locations to assess egg survival. Results elsewhere in the catchment were varied but none were worse we found on the Culroy at Sauchrie which had a 100% failure rate. This is a mystery as the habitat and water quality appeared good. Siltation was minimal at the egg box site so I was at a loss to explain the results hence the electrofishing follow up that we commenced today. (The egg box trial report is available in the downloads section of our web site). 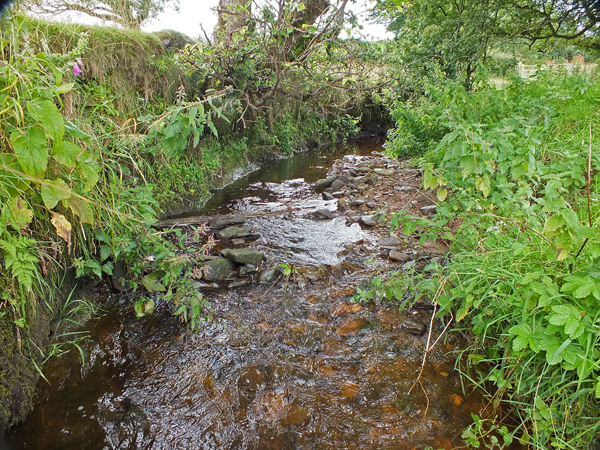 We looked at both the Culroy and Garryhorn burn at Sauchrie. Neither site produced any trout, salmon, minnows or sticklebacks but the Garryhorn had a couple of small eels. Both habitats looked in good condition and I am surprised by this result. The kick samples revealed that the invertebrate samples were poor with low numbers and little diversity. I will look at these in more detail later this week.

We headed to Otterden Wood where we found salmon and trout last year. On the way we noted that the burn was eroding in places and cattle and sheep had unrestricted access. I’ve seen worse erosion but this can’t be helping with water quality and spawning on the burn although there wasn’t too much sediment lying on the bottom. The burn is over wide and shallow in this area as a result of the erosion but there were deeper pools that should hold fish. 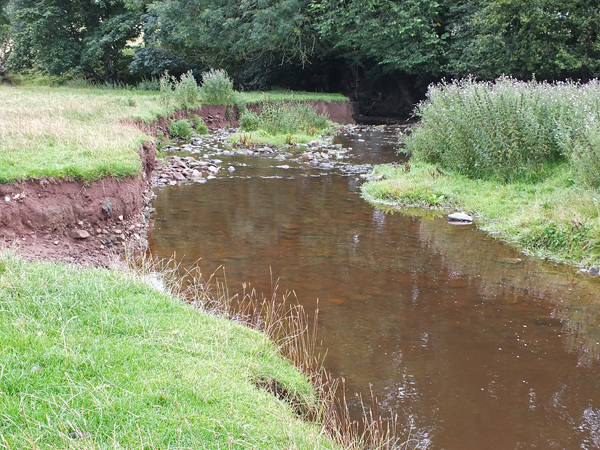 We fished the Otterden site and again we caught no fish. I am now convinced that some sort of pollution has been responsible for the loss of fish as there was just nothing to catch.

We headed back to the van and up Glenlamond  as this area has never been fished before. I presume the burn is the Almond but it’s not named on the map. I’d been here years ago when out hunting and I thought it worth a look near the old ruined steading at Glenbay. Yet again no fish but the invertebrate sample was excellent this time with plenty of variety. We noticed a lot of large baetids in the sample, unusually large. Struan identified these as Summer Mayflies (Siphionurus lacustris). One hatched in front of us so I photographed it to be sure. I’m not too concerned at the lack of fish at this site although I would have expected at least a few wee trout. I’m not certain that fish can access this site but I will check the habitat survey to be sure. There is one thing for sure, there was plenty of food for fish so it may be an area to stock fry in future. 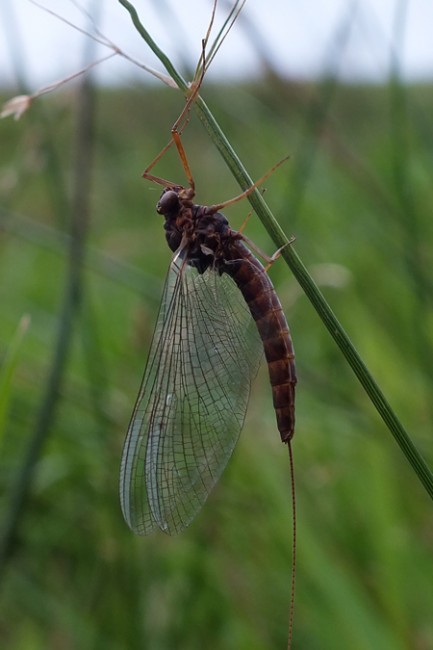 Further downstream we again fished the burn behind Garryhorn Farm without success. Time was getting on and we decided to call in at Sauchrie House to ask permission to fish within the grounds on Sauchrie Burn (the upper Culroy that rises on Brown Carrick Hill). No one was in so we thought we would have a quick look at the waterfall that we knew was impassible. I’d guess it is about 50 – 60 feet high and possibly the highest falls within the catchment (Dalcairnie at Dalmellington is the other candidate for this title). As it was Struan’s 21st birthday today, I managed to persuade him to pose in front of the falls for a photo. Happy Birthday, Struan. Hope you enjoyed your day despite the lack of fish. 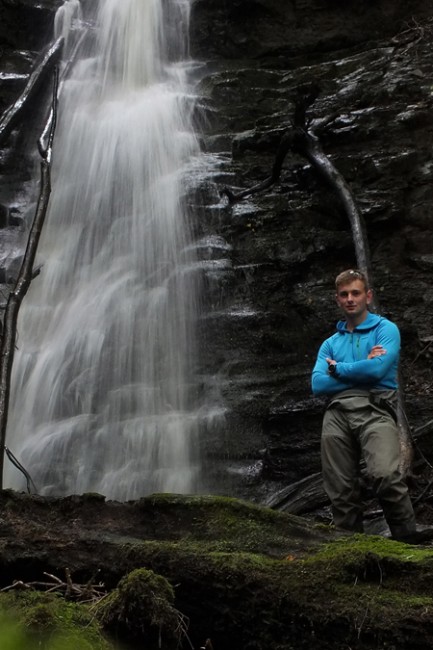 Tomorrow we will survey the lower burn in the morning. The lower burn was stocked with salmon today (this morning) so it will be difficult to determine if any fry we may find are naturally produced or not but if we don’t find minnows and parr, I’ll be very concerned that the entire fish population that was in the burn over winter may have been lost. I’ll update tomorrow evening with the results. I’m fairly sure that this was the first blank electro fishing day I’ve ever had since joining the Trust.

2 Responses to Blank day on the Culroy