A different approach to increasing stocks

We were on the Girvan translocating fry from a high density main stem area to a nearby low density tributary. This is a far less damaging way of increasing the habitat utilised by salmon than the rather less controllable stocking with hatchery reared fry. 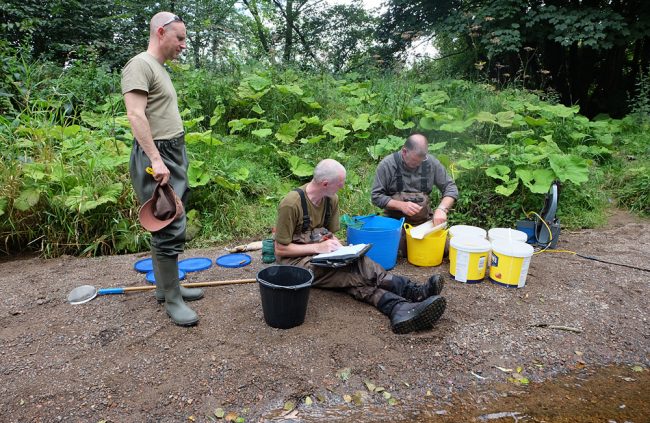 The process of clipping the adipose fin on the fry that we were about to move.

The adult pairings (therefore the unconscious genetic selections) were made by the fish themselves and until today these fry have been 100% natural without human interference. We removed these fry from a high density location where through natural mortality, large numbers (the vast majority) of these fish will die before they see their 1st birthday. Removing them now may enable more fry also survive in the area from where they were taken, as competition will reduce. They were moved into a tributary burn where salmon numbers have been declining in recent years and at our upper survey site, they were absent today. The tributary runs into the river immediately upstream of the area from where they were removed, thus the fry will be genetically very very similar to those fish naturally spawning within the burn. In years when the burn is too low to allow migration, the fish destined to spawn there will be forced to spawn in the lower burn or the main stem so potentially and in all probability these fish will be genetically very similar. Placing these fish into the burn in low densities may help ensure better survival as there will be a lack of competition and predator bird numbers are low by comparison to the main river. 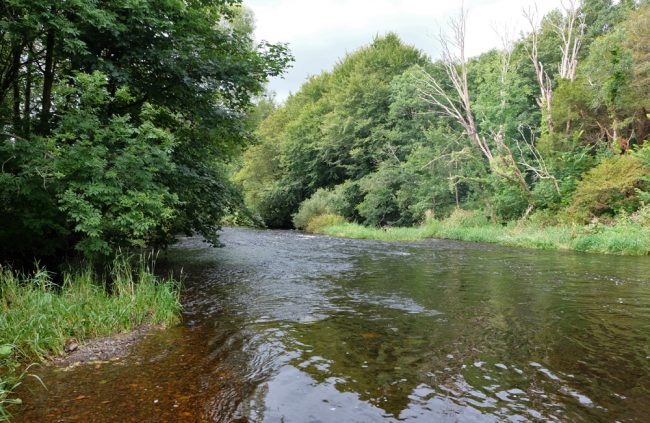 The habitat where we collected the fry to stock in the tributary. This burn enters 50m upstream of the location where the photo was taken.

The only real choice we have made for them is picking suitable alternative habitat. This is quite different to any hatchery intervention where man selects everything and rears even the weakest fish that would normally die in the wild. In our opinion, this is an ideal method to supplement natural recruitment where it is low or when new habitat has been opened up and a small carefully planned intervention such as this carries virtually no risk to naturally spawned salmon. Each fish we moved was adipose fin clipped to allow us to monitor success in future. The Girvan DSFB agreed with this strategy rather than adopting hatchery intervention as pressure from anglers mounts as catches decline. 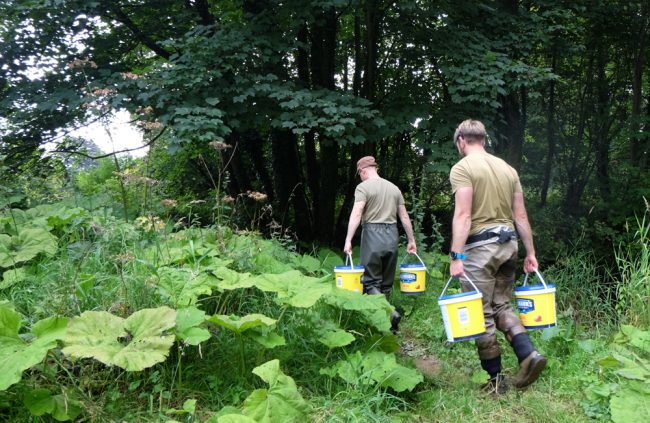 Struan and Muir with buckets of fish on their 5 minute journey to a new home. 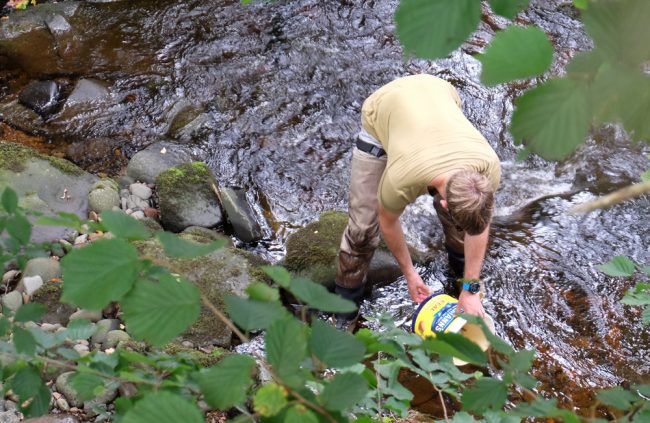 Struan releasing the fry into the under populated tributary. The habitat here is excellent and relative free from predator birds although there are a few trout that may snatch an easy meal.

Mainstream fry results on the Girvan are regularly amongst the best found in Ayrshire however some tributaries have been declining recently for a variety of reasons. It was good to see a new fence being erected on the very burn we stocked today. This has to be the way forwards.