Giant Hogweed Control on the Ayr

This season, we first started with Giant Hogweed control on the Ayr and will move onto the Doon and Coastal Burns once this river has been completed. We also have funding for Pesticide training for volunteers in the Garnock area where this plant is also widespread. 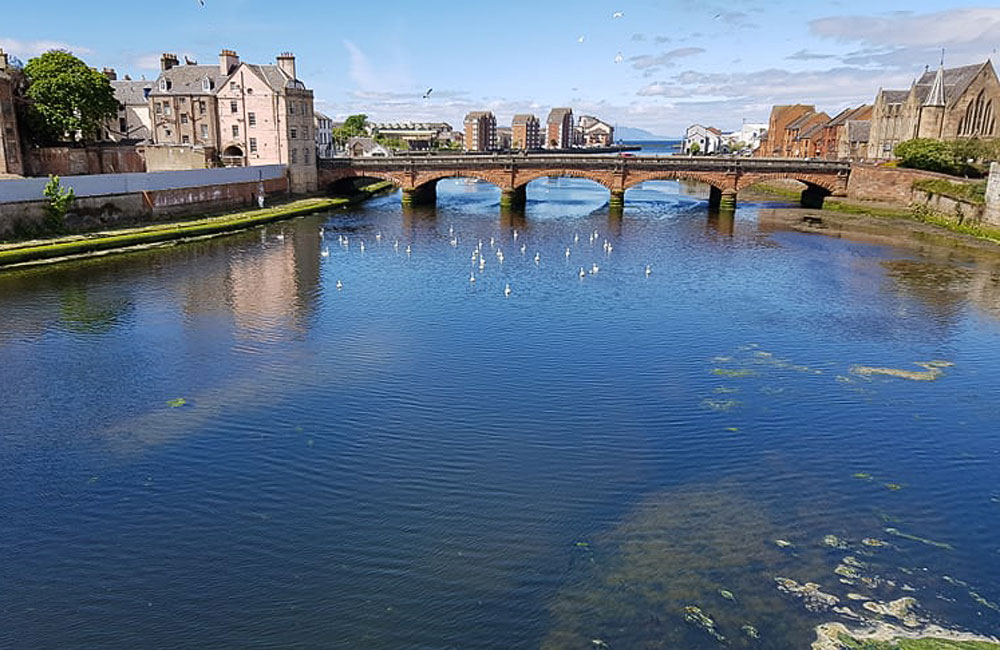 Those who have fished the River Ayr over the last 15 – 20 years, can’t help but notice the decline in Giant Hogweed on the river since 2008 when Ayrshire Rivers Trust first started controlling this plant. Giant Hogweed is a non native and invasive species that out competes native species to the detriment of the environment. It dies back in winter leaving large areas of bare soil that is prone to erosion in winter spates. This in turn leads to fine sediment depositing on spawning beds and also enrichment as nitrates and phosphates are bound to soil particles. 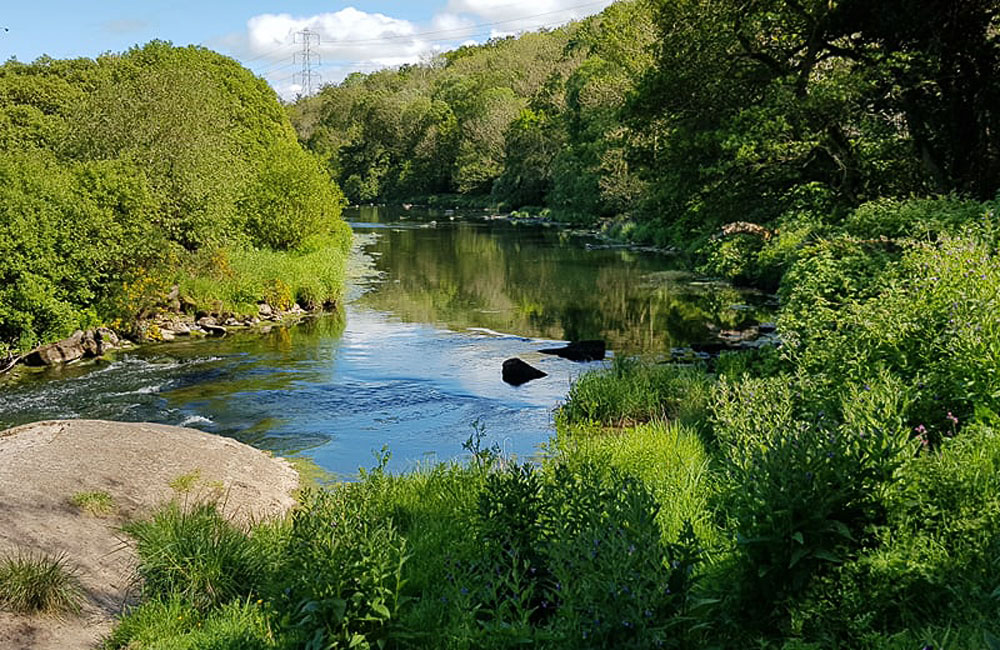 An idyllic view looking upstream at Overmills. The bank on the right requires control from top to bottom and its an arduous task clambering up those banks laden with a full back pack of herbicide.

It’s a  real problem plant that was first introduced to the catchment in 1964 and has since exploded across most of the catchment as it produces anything up to 70,000 seeds per plant and the seed can lie dormant for years. It is also a dangerous plant and it shouldn’t be touched as the sap reacts with sunlight and burns the skin leaving huge blisters and highly sensitive to exposure to sunlight for years to come. It can cause blindness if eye contact is made so it shouldn’t  be strimmed under any circumstances yet we frequently hear of people doing this and suffering for it. 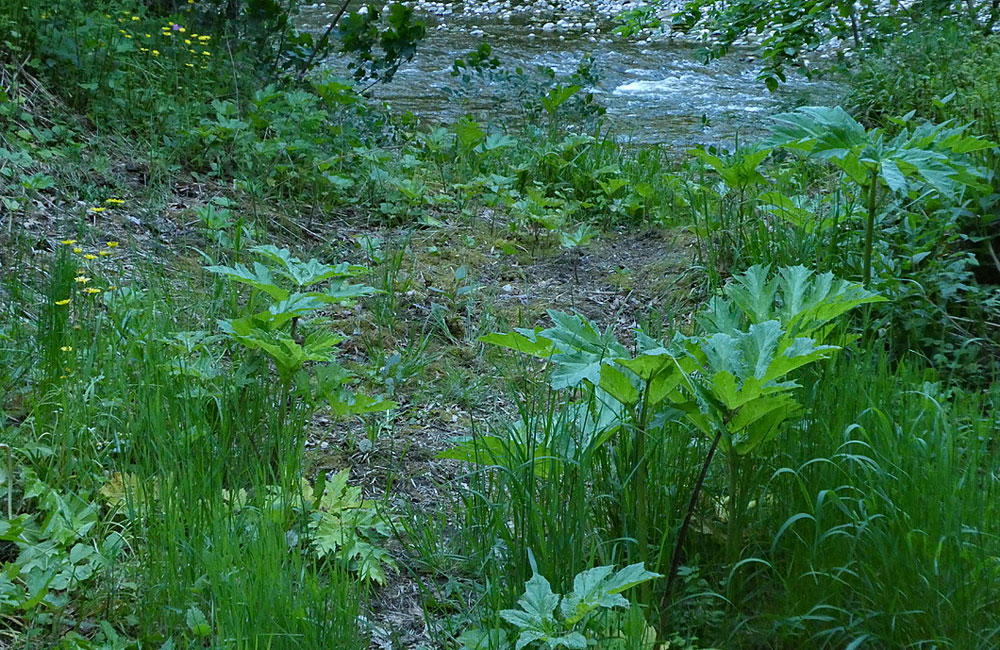 The mass f young plants in this image indicates a plant flowered here in the last year or two. That’s a huge setback to the strategy we follow but not unexpected when over 50 miles of riverbank has to be inspected and controlled each year on this catchment alone.

Fortunately ART took on control of this plant and have been successful in securing massive funding to tackle this over the years. It is no mean feat with over 40 – 50 man days allocated to controlling this plant in the Ayt catchment alone each year and gallons of herbicides required, but ART are persistent and keep looking for funders annually. The Ayr Board provided £1500 towards the cost this year and that helps the trust immensely. Other funders this year include South Ayrshire Council, The land Trust, EB Scotland and South Ayrshire Waste and Environment Trust to who  ART are extremely grateful. 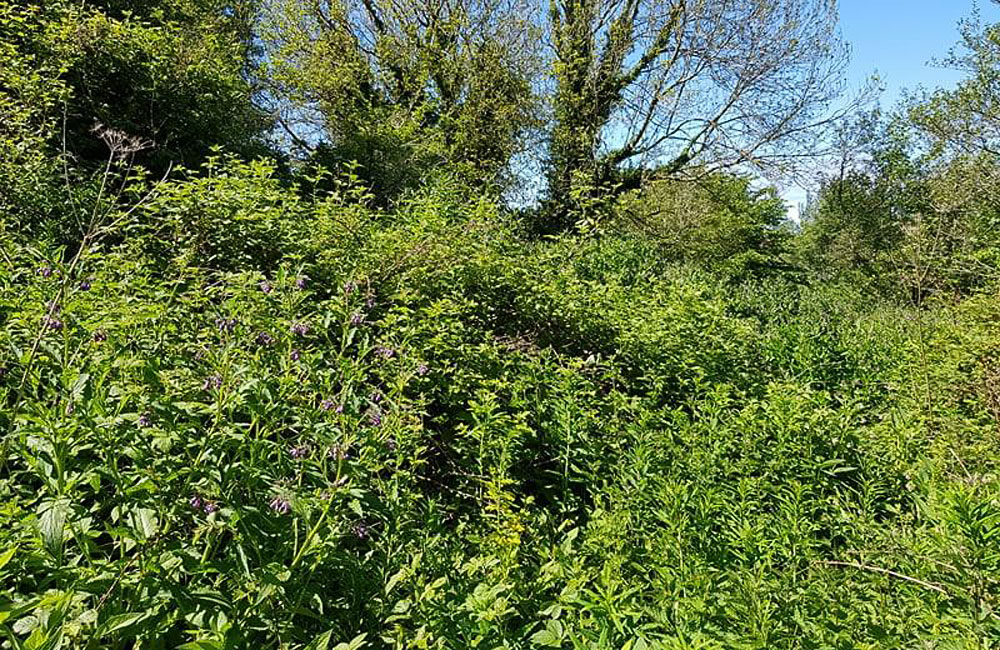 Facing uphill from the foot of the bank and its clear to see how difficult a task it is to treat every single flowering plant. This undergrowth is almost head hight and covered in brambles and nettles and all sorts of stinging and biting beasties. Not a job for the faint hearted.

It is an arduous task scrambling along every meter of riverbank to ensure no flowering plants go untreated while at the same time, younger plants are also sprayed to reduce the following year’s work. Slowly but surely, the numbers of flowering plants are reducing and this is encouraging but it may time many more years before anyone can contemplate this plant being eradicated. ART expect to complete the Ayr catchment control next week after which we will move onto other affected burns and rivers. 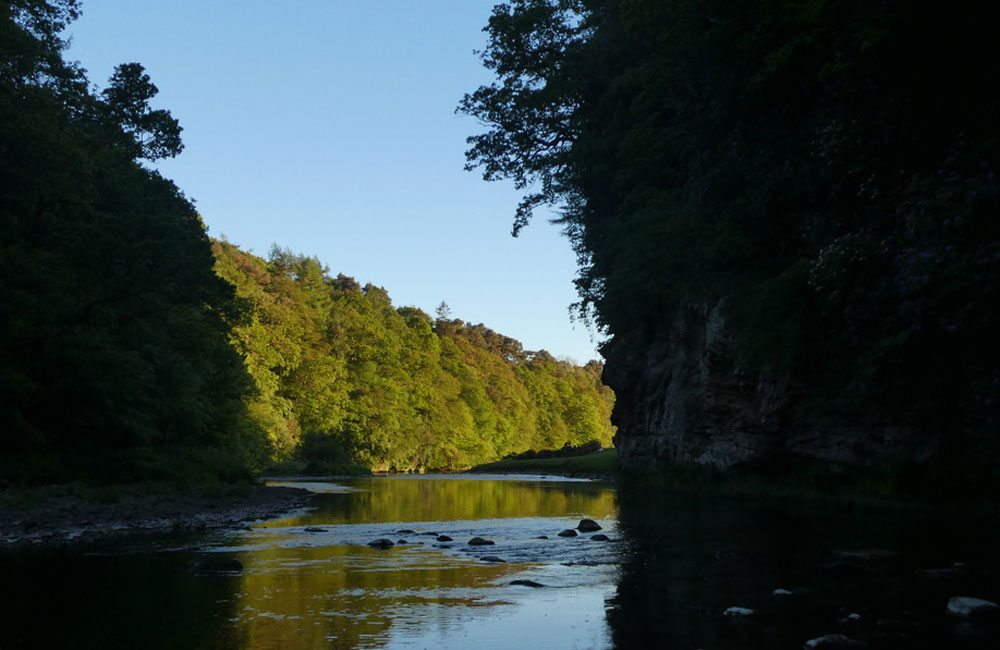 One of the really satisfying aspect of controlling these plants is the opportunity to walk every inch of the water. There are always stunning views and unusual sights to see. I saw both an Osprey and a Peregrine within half a mile of this spot in the last few days.