Preserving isolated trout populations that are under threat

Most of our readers and followers will already be aware that we advise against artificial stocking strategies to enhance wild trout and salmon populations and there’s very good scientific reasoning reason behind this, not least that the evidence shows that while you can temporarily increase stocks through hatchery and stocking intervention, you may also inadvertently make genetic selections that can impact on the very populations you so desperately wish to improve.

A simple example of where mistakes are easily made would be the breeding of spring run salmon with summer or autumn run fish. This probably would be detrimental to both early run and later running stocks and their unique genetic signatures may be lost.  Avoiding this type of scenario is not necessarily easy as it may be impossible to determine when these fish entered the river. Consequently it is best to avoid these pairings entirely. Similarly, there is evidence that rearing fry in hatcheries conditions them to artificial environments that may reduce their survival when released into the wild. Once released, hatchery reared fry may also compete with wild fry that may be less developed and therefore at a competitive disadvantage than the stocked fry that have been fed and reared prior to release. Thus once again, wild fish may suffer as a result of stocking. And then of course there are other problems that can occur such as fungal infections within hatcheries such as we faced in our efforts outlined below. We stand by our opinion that enhancement stocking to boost numbers for angling purposes is best avoided and any other stocking should be only taken where there is adequate scientific justification.

However, there may be occasions when we do support the use of minimal intervention to preserve threatened populations and this winter we operated two micro hatchery/incubators to help maintain trout stocks that are declining in lochs where artificial barriers prevent natural repopulation. These incubators operated in two different locations on separate loch systems. Each loch faces different issues but in both, the numbers of trout are declining. Common to both systems is damage to the habitat where spawning takes place. Solving the habitat issues would be the best and most obvious solution but that wasn’t possible and therefore we decided that intervention was justified in order to buy time in the hope other solutions may be found.

Glenbuck  loch is at the top of the Ayr catchment and was once a fabulous brown trout fishery. Angling is no longer permitted so our intervention was entirely for conservation purposes and nothing else. The available spawning habitat has been degraded through mine discharges and while not new, we believe recent restoration of opencast sites has only exacerbated the problems and reduced the habitat that remains useable. Iron oxide coats the bed of the spawning burn leading to anoxic conditions developing within the gravels. Egg trials confirmed that mortaility in the prime spawning areas is 100%. 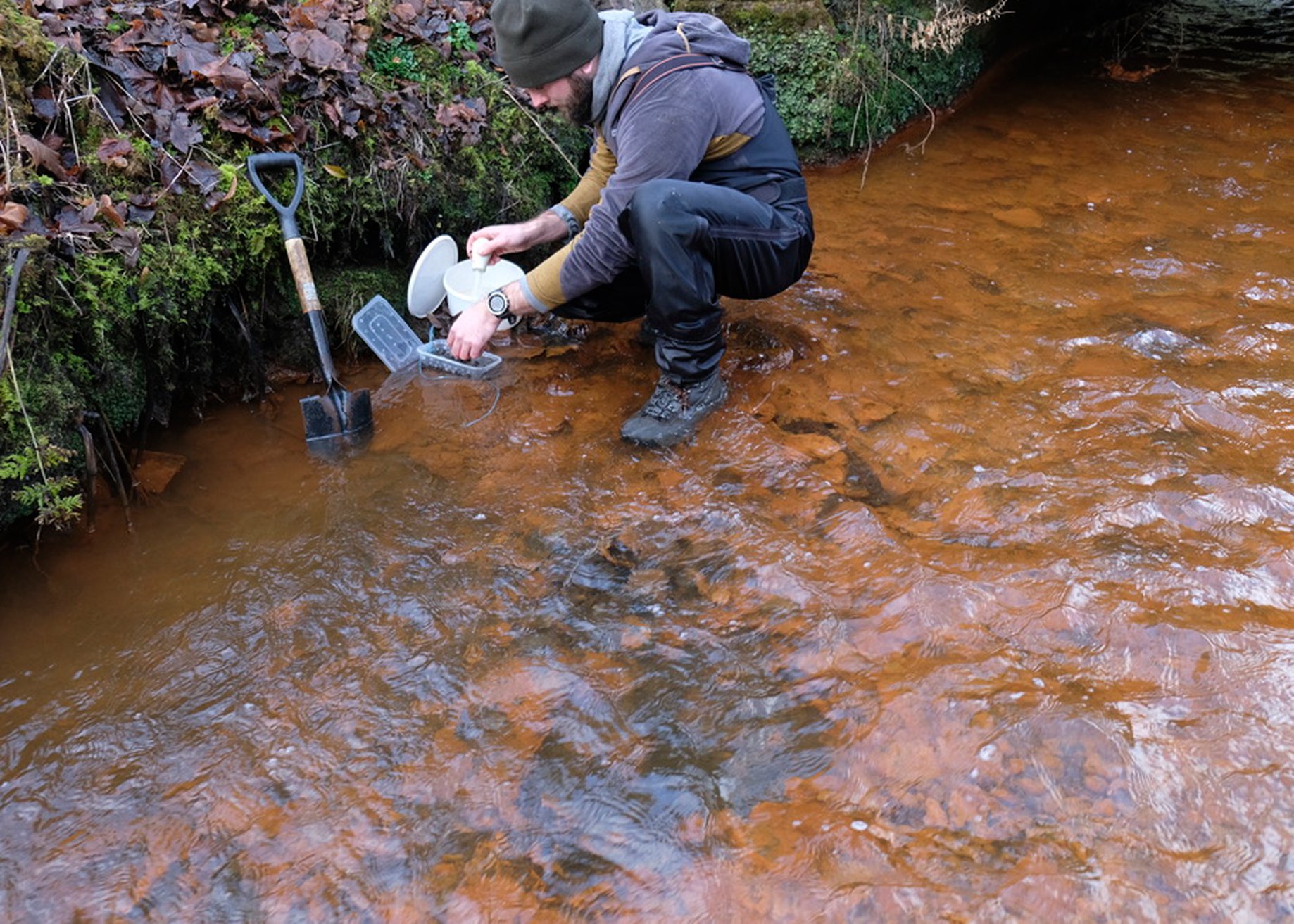 Egg box trials which show the eggs fail to hatch in the substrates of this burn. The iron oxides coat the bed and prevent free flow of oxygen reaching the eggs and consequently they die

By selecting pairs of fish that were about to spawn together, we reduced the risk of inappropriate breeding. These fish were stripped and the eggs ferilised by their mate, then placed in a tank on a nearby tributary where good water quality was constant. This tributary has only 50m available to trout for spawning as there’s a waterfall that prevents upstream migration. Our incubator had a supply from the waterfall and an outfall back to the burn and the intention was to allow the eggs to hatch and once thee alevins reached swim up stages and started to look for food, they would leave the tank via the outflow and enter the burn. As much as possible this was ‘hands off’ intervention that was designed to allow nature to control survival. 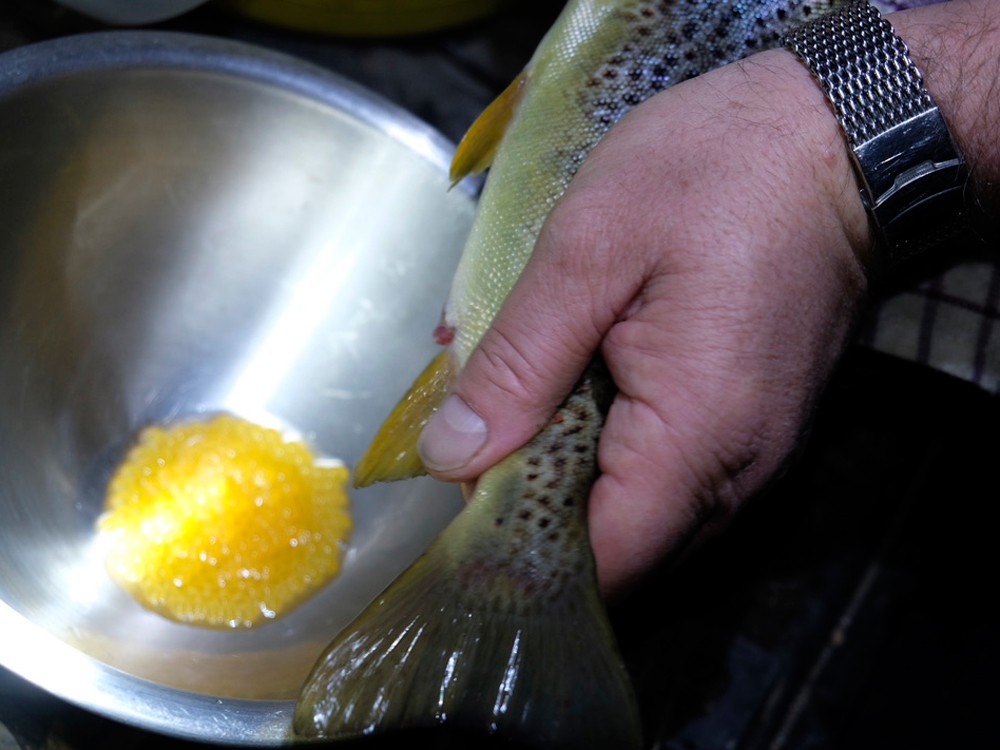 Stripping eggs from a hen trout 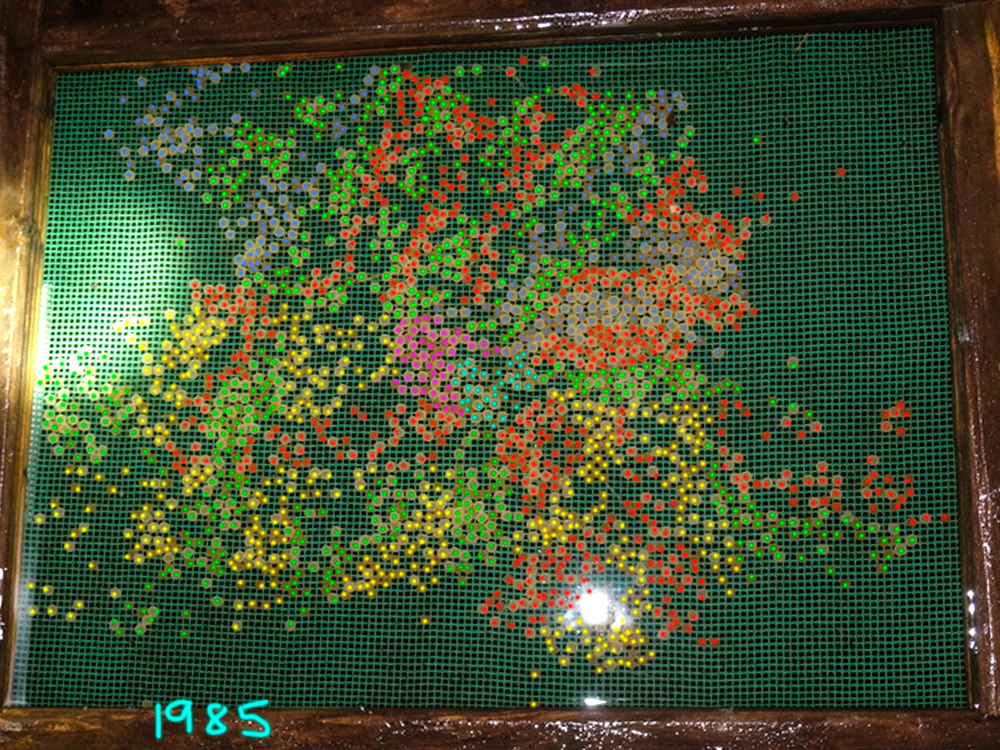 This method of counting allows accuracy and assessment of our work

The other loch, high in the Doon catchment has similar spawning habitat issues but this time the problem was granite sand mobilised by forestry operations rather then iron from mine discharges. Spawning habitat on both lochs was compromised and these problems are not easily resolved. Angling remains a pressure on the second loch but catch and release has been adopted by anglers yet numbers continue to decline. The same ‘hands off’ intervention was applied on both systems although regular removal of dead eggs and alevins was required to prevent disease spreading. Shortly after most eggs hatched, fungal infection within both tanks was increasing although not excessively. It was decided at that point to plant any remaining eggs and release the hatchlings, allowing nature to take its course in the burns rather than in the confines of the tanks where we considered the risks greater. Only healthy unhatched eggs and alevins were released. 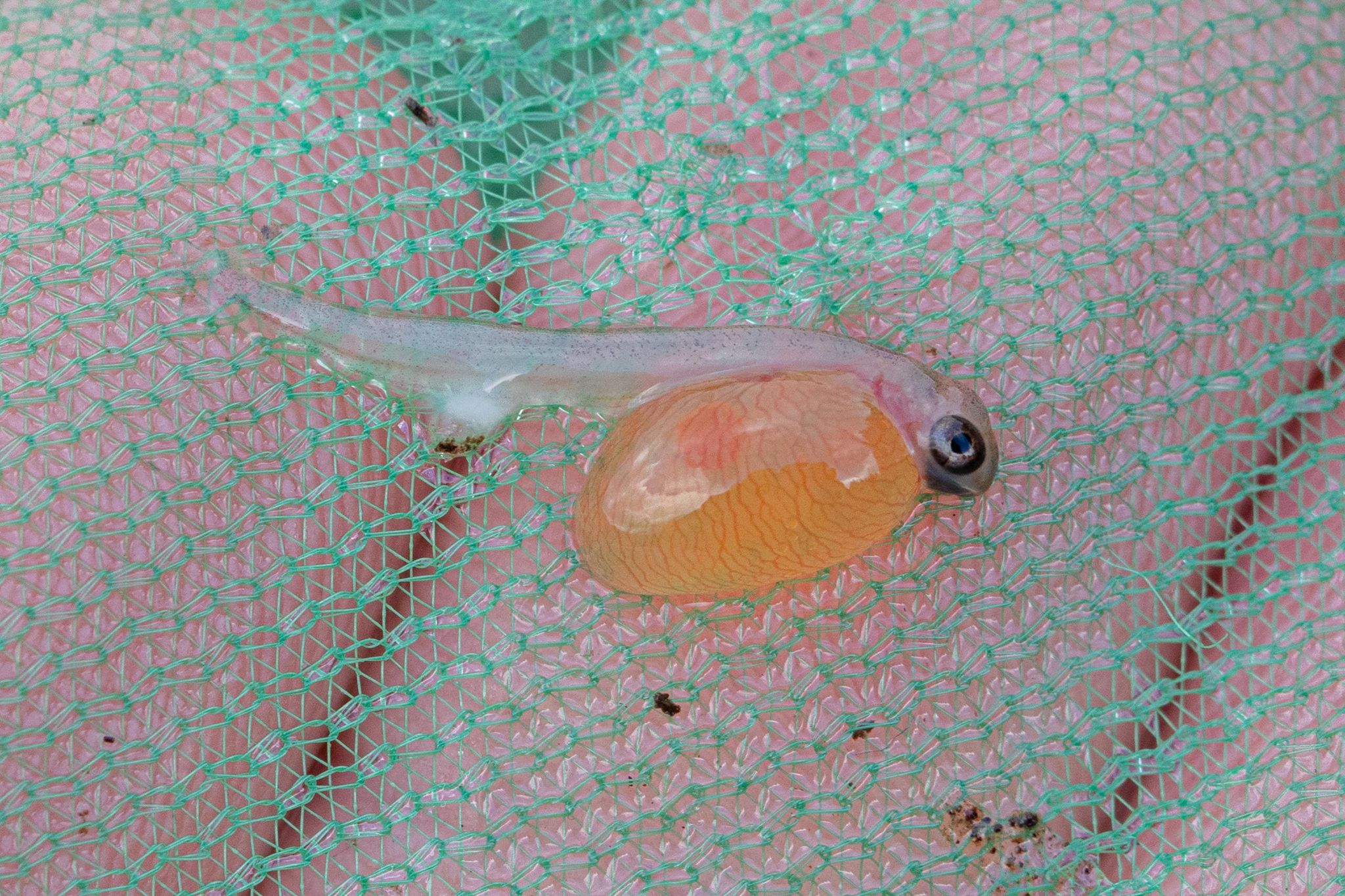 An alevin showing the early stages on fungal infection. Rather than continue with the incubator, it was decided to release the fish and allow nature to take its courseWe’ve added links to videos of the two hatchery incubators and our work. We filmed them periodically and photographed every stage of the process. We try to explain the issues within these films and also the problems we faced running the incubators.

The videos can be viewed by following these links or copied and pasted to your browser (we had a problem installing hyperlinks today for some reason). The Glenbuck video is here https://www.youtube.com/watch?v=vnuDtbEcCcQ&t=5s

The other video is here   https://www.youtube.com/watch?v=SKWQbu4LpvQ

At this point in time, we can’t yet say whether results at either tank were successful as results will be measured during surveys later this year and over time. However, at the Glenbuck site, any survival is an increase on the natural situation and therefore our intervention could be determined a success. We will continue to look for habitat improvement opportunities where we can identify them and are working closely with forestry interest towards that goal. The mine water situation is rather more complex and challenging but we will do whatever we can but that won’t include resolving historic mine water pollution as it is far beyond our means and abilities.