In 2006 we operated a smolt trap in the River Doon where the largest salmon smolt  captured was 175mm. This morning in the River Ayr trap we found a big one of 180mm, a fair size for a salmon smolt.  Will this fish return as a large adult salmon? As far as I am aware it doesn’t necessarily follow that big smolts produce big salmon as it could just as easy come back next year as a grilse but anglers on the river will always be hoping.

Unfortunately the scales taken from the fish were all unreadable so we can’t age it but it was likely to be a three year old. 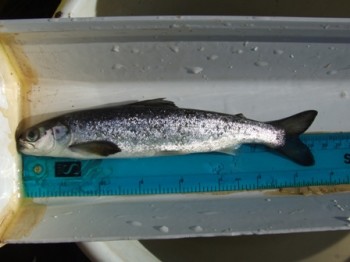 Despite the continued low water we are still catching 20-25 fish per day including small salmon parr. The old adage is the the first spate in May takes the smolts away so we anticipate a big run following the next decent rainfall.