Flexibility: the key to survival?

We are working our way slowly through the massive pile of scale samples taken during the smolt trap project on the River Ayr. The majority of the salmon (and sea trout) smolts have been two year olds but some of the scales have highlighted the different growth strategies followed by fish of the same species.

The photo below shows scales taken from a salmon smolt of 116mm  (a small one) caught in mid May. It was a one year old plus (meaning new growth this spring, a salmon’s birthday is generally considered to be on the 1st April) smolt, nothing unusual about that nowadays but the growth burst put on this spring was huge. It is possible to backcalculate the length of the fish when any particular feature on the scale occurred. By doing this we can see that the smolt was small at the end of the first winter, around 60mm, meaning that it almost doubled in length this spring. 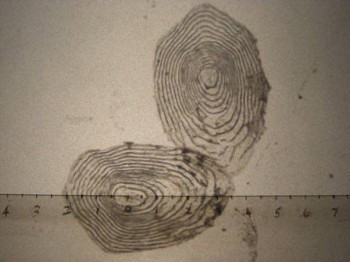 When we are electrofishing in late summer a fry of that length would be considered quite small or perhaps from an upland part of the catchment where temperatures and growth rates are slower.

In contrast the photo below shows a scale from a salmon smolt of 193mm, the biggest one captured in the smolt trap. It was a two year old plus at the time of capture in mid May but it was also very small at the end of its first summer, again about 60mm. This fish put on a huge growth spurt in its second year in the river. 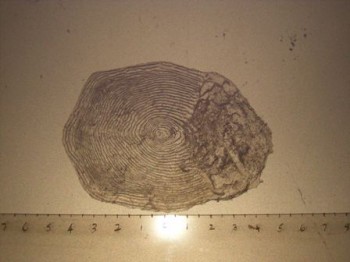 So here we have two fish, both relatively small at the end of their first winter in the river, one of which puts on a growth spurt and becomes a one year old smolt, whilst the other piles on the weight during its second summer in the river before migrating to sea as a giant two year old smolt.

This highlights one of main differences between Atlantic salmon and pacific salmon where the lifecycle of some pacific species is very rigid with one year in the river and one in the sea. This can result in predictable runs e.g. even years producing more that odd years. Atlantic salmon are much more flexible and the fish returning to the river in any particular year could be from eggs laid in the river from several different spawning years. This provides insurance against a catastrophic loss of fish in any year, but on the other hand pacific salmon don’t seem to be doing too badly!