ART became aware of a water quality problems on the Doon late on Monday afternoon that had been traced back to Calmerston Open Cast Site near Dalmellington.

Scottish coal met with me on site on Tuesday morning along with a representative from the DDSFB. It appears there was a landslide in a steep glen just upstream of a culvert. The culvert had been installed by Crouch Mining during 1990 when Chalmerston OCCS was operational to allow a coal haul road to be constructed. At some point last weekend, following a landslide, this culvert became block by debris from the landslide before  water in the glen backed up. Subsequently, what appears to have happened is the pressure build up upstream of the culvert led to a rapid flush of the lose sediment through the culvert and down to the River Doon. The Doon was in spate at the time and this helped clear most of the suspended solids quickly. By Tuesday morning the Doon was running clear again.

SEPA are involved and we are awaiting further updates but obviously Scottish Coal have intervened in an effort to solve the problem and reduce the impact of this incident. The solution will require considerable engineering and Scottish Coal have been quick to step up to the plate. Most of the flow from the burn is being over-pumped until the repairs are completed. The cause of the landslide are as yet to be identified but the Glen is one of the few areas that hasn’t been worked for coal. 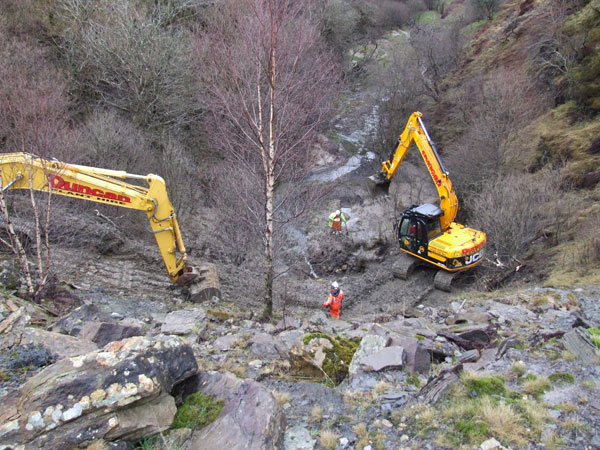 Looking down into the Glen from the road

The impact of this event is unknown at present but we are concerned that egg survival may be affected and we will assess this in the summer months by electrofishing surveys. The areas most likely to be impacted will be the Cummock Burn (downstream of Sillyhole Bridge) to the confluence with the Muck Water and possibly from there downstream to the Doon. We can only hope that the impact is minimal especially as this area has important spawning redds for both trout and salmon.