I’ve just realised that I haven’t posted an update for the major engineering works that are underway on the Kilmarnock Water for some time. Fortunately I was in the town this evening to pick up my daughter and I had a quick look to see what progress had been made. I was pleasantly surprised as the weather has been causing all sorts of problems. Two weeks ago I was assured that the works were still scheduled for completion on time (October) however with the continued extreme rainfall that we have had, I suspect things may now be slipping. Compare the photos from the blog entry dated 18/04/12 to see the difference. 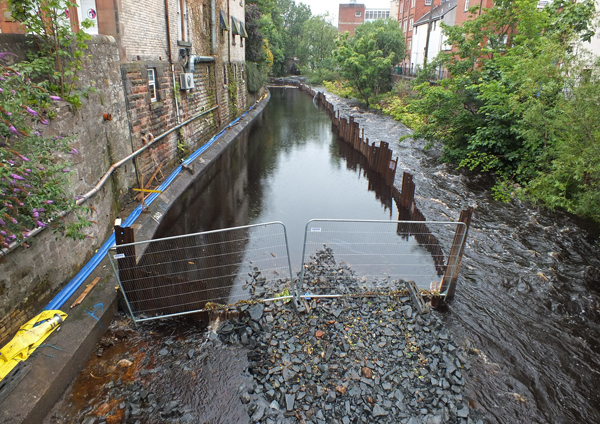 The view from the footbridge upstream of St Marnock Street bridge 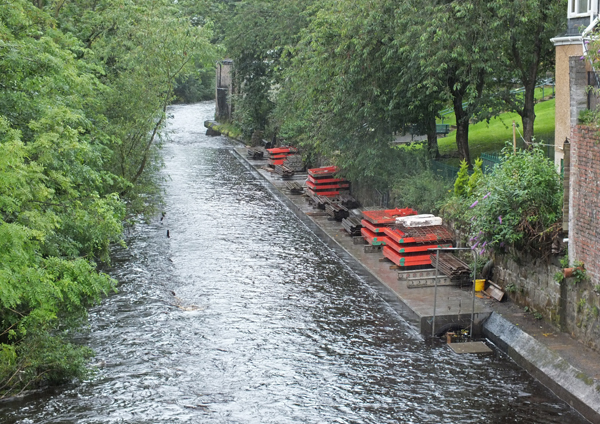 The water was in spate again today and had flooded the protected areas where the contractors are trying to pour concrete around the new pipeline. The photo looking downstream shows a section of new pipe installed on the right bank. You can see the piling in the centre of the river – completely inundated. The photo looking upstream from the bridge also shows a similar problem. 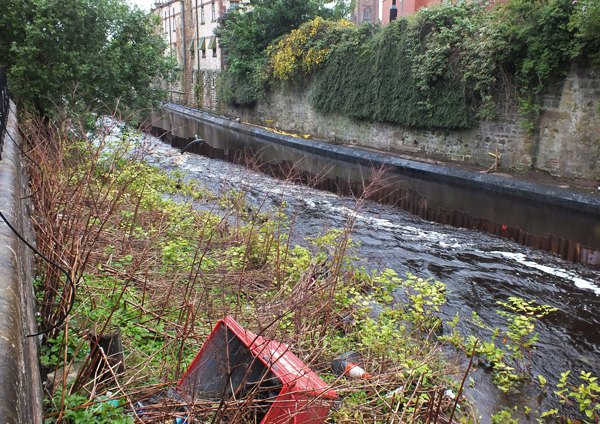 JK surviving on the left bank

Japanese Knotweed has long been a problem in this area but last year the contractors agreed that we should spray it before they moved onto the site. This was done however the stems near the water’s edge had been broken by spates. Although these stems were sprayed, the chemical doesn’t appear to have been translocated effectively to the roots and many plants survived. This years rainfall has once again led to stems at the water’s edge being broken so we may have to inject the stems below the breaks to kill it this season. On a brighter note, the very dense stand further back from the river have been very effectively controlled considering the density of plants that was there last year. We will respray any surviving stems  when the plant comes into flower in September. Overall I’m very encouraged by the results and am confident that we can completely eradicate Japanese Knotweed from this river by the end of the INTERREG project in 2014.