Last week we had another two volunteers pass their PA6AW training course. John Muir and Alan Knox from Dalry Angling Club both passed without any problem and will now join a group of 22 other volunteers already trained by ART. Our training budget had now run out for 2012 and as there was only a few places left on the last training course some people may have missed out. ART will however have more training on offer in 2013.

Our contractors have now completed the Giant Hogweed control across Ayrshire and have done a very good job. Our next target was Himalayan Balsam but extreme weather conditions have made it difficult in many areas. On the evening of Thursday 9th August we managed to get a few volunteers together and went to work on the Fenwick Water. We managed to cover a good section from Fenwick downstream. Although there were not all that many plants we pulled around 70 in total so hopefully when we return next year this section of the water will be clear. The best way to deal with this plant is to pull it. It comes up very easily in most cases and the soil should be shaken from the roots and the plant hung up somewhere to dry out and die. 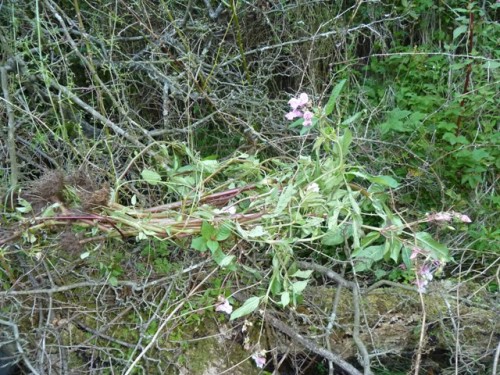 Some Himalayan Balsam Hung in a tree after pulling

On the same day i spoke to Gary Anderson of Galston Angling Club who had been pulling Himalayan Balsam all week. A huge thanks must go out to Gary for all his efforts and indeed to club member Brian Luke for helping. Gary has now cleared the Galston Club waters of Himalayan Balsam and on Thursday alone they pulled over 2000 plants. When this amount of plants are pulled the best thing  to do is put them into large piles. The work that Gary and Brian did this year just goes to show that with a few club members getting involved it doesn’t take long to clear. 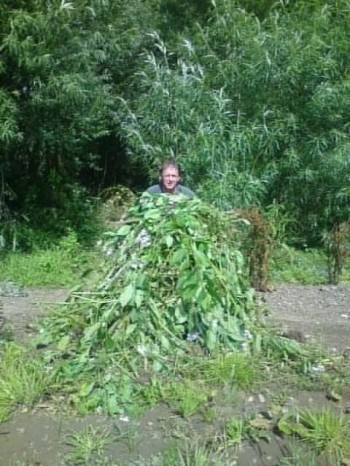 It is nearing the time that the Himalayan Balsam will go to seed so although we encourage all club members/riparian owners and members of the public to pull the plant whenever they can, if the seed pods are fully formed it is best not to go near the plant. These pods can pop and shoot seeds up to 7 meters .Seeds can attach themselves to cloting and footwear and can be transferred to other areas very easily. 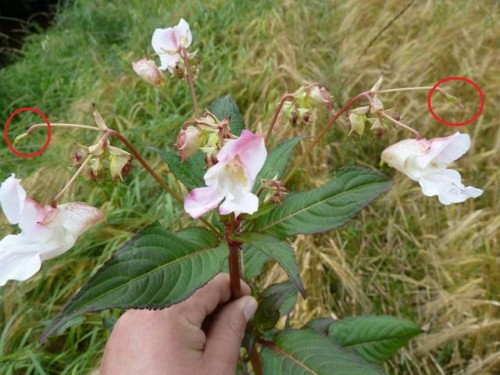 If possible I plan to have another go at some more pulling on the Fenwick water this week as none of the plants we pulled on Thursday had seed pods on them.  The weather however is not looking great. If i am going out I will post a blog and email our volunteers to see if they can lend a hand. Anyone wishing to join us can get in touch with me at the ART office on 01292 521223. I know that Dean Castle have been out pulling further down stream so if we can make it down to there this year at least that will be a start. Next year however we will concentrate more on this plant and start a lot earlier. My plan is to get local communities involved as well as the angling clubs/riparian owners and hopefully together we can make a big difference.

The Japanese Knotweed is now starting to flower in some places and it won’t be long before our contractors make a start on it’s control. The best time to spray this plant is when it is in flower. This has the greatest effect on the plant and should kill it off. The plants stems can also be injected however and ART staff have already done this a few times this year. More information on the Japanese Knotweed control will follow soon.

This week I will also be updating the ART website with information on the CIRB project as well as information on identifying and controlling these invasive species. We also have information leaflets and ID sheets to hand out and will get these into circulation as soon as possible.