Following up on the surveys we undertook on the Culroy Burn last year, I decided to take a look at it today on my way back from a farm visit.

We recently had a report of American Signal Crayfish on this burn. Although a bit early in the season yet, I thought I would try to find any evidence of them or their activity. I was also keen to look at other problems that may be limiting salmon and trout production on this burn. I’ve already walked most of this burn recently, but the stretch between Minnishant and Grange House further upstream hadn’t been walked for several years.

Starting at Minnishant I set off upstream and soon came across a weir in the first field. I knew about this but had never spent any time looking at it. It is a large weir for such a small burn. At well over 1m high and around 10m long it is low gradient and we know salmon can get over it. It will be interesting to return in high water to see how it looks then. The weir is cutting back from the toe but overall it looks solid and will be there for some time to come. The cutting back will make migration increasingly difficult as it worsens. 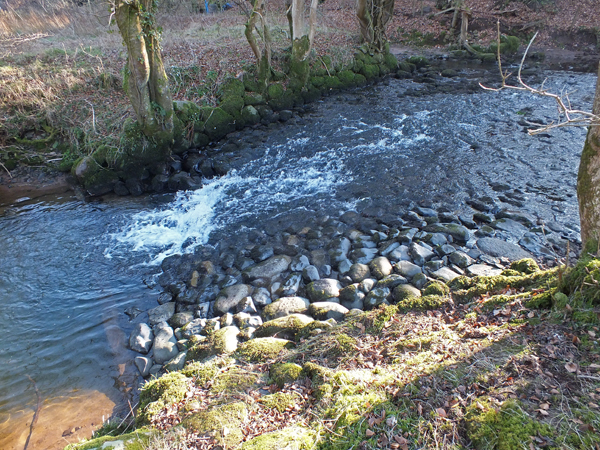 As I progressed upstream, fallen trees were plentiful but few were causing problems. Some have been cut and removed since I last walked the burn several years ago. Deadwood provides important cover and refuge for larger fish and often helps to scour deeper pools so removal should be limited to trees causing erosion or blockages. 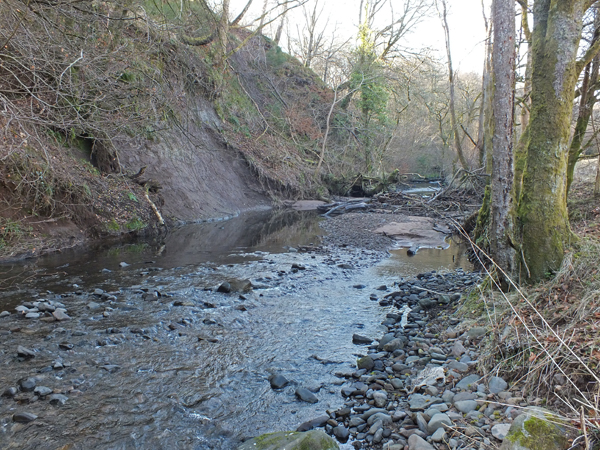 A landslide caused by a fallen tree deflecting the flow onto a steep bank. This tree would have been best removed sooner. Sit and gravel has built up below the obstruction on the opposite side of the burn. This will help to continue the erosion. by deflecting the flow.

Whilst there is a fair amount of bedrock in the burn, there are areas where the gravel is ideal for spawning. A mix of substrates along the length I walked indicated that aside from siltation, the habitat was on the whole excellent for salmonids. Perhaps in some parts would benefit from woodland management as I suspect in summer the canopy will over shade large areas but this doesn’t appear to be too big a problem. The main issue appears to be siltation and perhaps as a result of this the burn suffers from enrichment too but there are worse areas within the catchment. 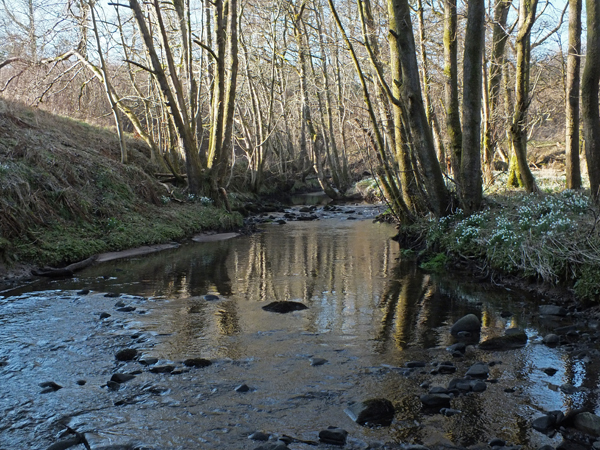 A lovely stretch of burn and native woodland.

I continued upstream to Grange House where the woodland ends and pasture starts. Between the top of the woodland and Culroy, I’ve previously recorded significant levels of erosion primarily as a result of overgrazing by livestock. In this area, the burn is unfenced and cattle cross as they please. 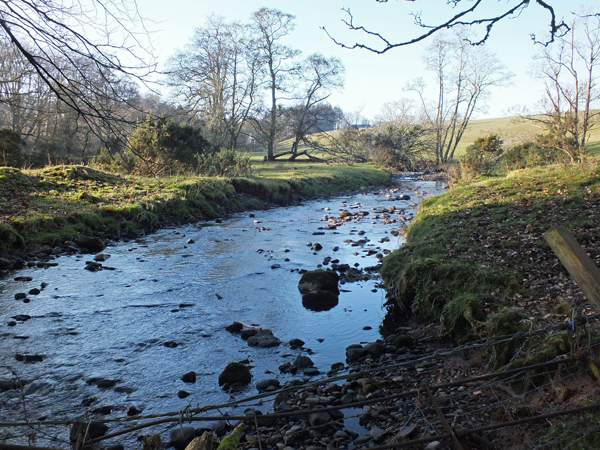 The burn upstream of the woodland lacks fencing and suffers from overgrazing, erosion and over-widening.

There is really only one field that is a problem and I will discuss this with SEPA and the DSFB in due course. ART has already indicated to SEPA that funding for fencing may be available to assist landowners with fencing  who are visiting problem farms as par of their ‘Priority Catchments / Diffuse Pollution’ initiative. As yet we haven’t received a single call about this offer. Further upstream at Sauchrie, again the burn suffers from unfenced margins and erosion is once again a feature but largely restricted to a single field. Further upstream the Garryhorn Burn enters the Culroy Burn and although I haven’t walked this yet, I did see one tributary that didn’t look too good. That’s for another day. We will be continuing our electrofishing surveys on this burn later this year as we attempt to work out how to improve the productivity. This burn was once reputed to be an important sea trout spawning and nursery area.

Although I looked long and hard, I could see no evidence of crayfish. There were otter tracks on every sand bar and I expect, were crayfish present, there would be claws and shells partly eaten strewn on the stream bed and banks. Otter love them! 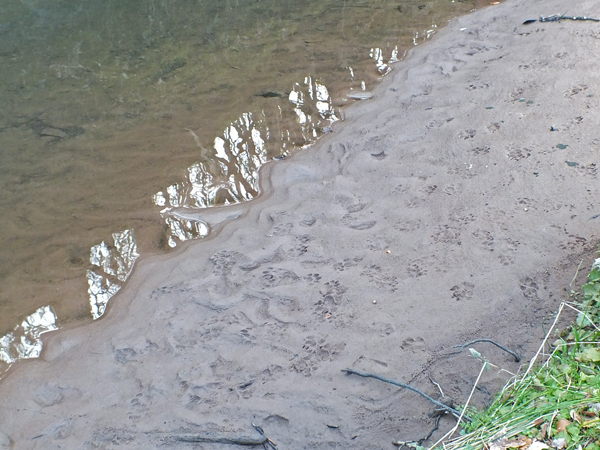 Otter tracks were plentiful but this may be down to a single animal or perhaps a pair.

Obviously if it is a recent infestation, the population density may yet be low and I will continue to search and monitor the situation over the coming year(s). It would be a terrible blow were crayfish to turn up on this burn and in Ayrshire. Once here, it is almost certainly impossible to eradicate them. Our salmon and trout stocks are challenged enough without having to suffer from the dreaded crayfish.