THE EVENT WILL BE RESCHEDULED FOR A LATER DATE

THANKS FOR ALL THE SUPPORT

We have agreed to assist The Princes Foundation and East Ayrshire Council with a clean-up and litter pick on the section of The Glaisnock Water that runs through Cumnock town centre. This is the first stage of the small project run by The Princess Foundation and we are looking for volunteers to help on the day. The event will take place on Sunday the 23rd June and will end with bbq. 9.30 am start at Cumnock Juniors Ground

“The idea of doing a river cleanup project resulted from a year long education initiative we, The Prince’s Foundation for Building Community, have been involved with as part of a partnership with the University of Strathclyde’s Department of Architecture. Over the course of the past year post graduate Urban Design students have been undertaking an academic masterplanning exercise in Cumnock. Running parallel to this we asked them to identify potential ‘Tactical Urbanism’ projects, which are basically small scale, quick win projects intended to change perceptions, or uses of particular areas/places with the hope of affecting long-term changes.

In addition to their own analysis the students have participated in numerous consultation events with community members, the most recent was on 2nd May in theCumnockTown Hall as part of a wider East Ayrshire Council event. The idea of a river-based project emerged through a process of both their own analysis and community feedback. Of all the ideas put forward as tactical urbanism projects the notion of doing something around the river was amongst the most popular. Numerous groups expressed an interest about getting involved, includedCumnockAcademy, YIPWorld, Cumnock Juniors Football Club, Cumnock Rotary, Cumnock Community Council, East Ayrshire Council officers and elected members, et al.

It was initially proposed to do a 2-stage project, with the first stage being a general tidy-up/litter pick focussed around the Glaisnock Water. For this we would hope to involve the various groups who expressed interest and hold a 1-day event culminating in a bbq to reward the efforts of all.

A 2nd stage would potentially include a ‘beautification’ element, through perhaps the construction and placement of benches or other furniture and possibly some minor landscaping works. The intention would be to refocus attention on the river and improve the atmosphere and appreciation of the river.  Any furniture would likely be constructed from reclaimed materials and with the help of students from Cumnock Academy. This would likely take place in late August.

The river is a central feature to the town and through the consultation exercise it was very apparent that people recognised its potential but were extremely embarrassed by its current state. This confirmed initial student work and with a (limited) budget we have been exploring options for highlighting it as a resource to be valued and even cherished within the town.

By way of background, The Prince’s Foundation is an educational charity, established by HRH The Prince of Wales.  We believe that sustainably planned, built and maintained communities improve the quality of life of everyone who’s part of them. We help people understand what they want from their communities, and then we make sure they know how to make it happen. “

The Prince’s Foundation had originally contacted us over fears that the Japanese Knotweed problem on the Glaisnock Water would hamper their plans so myself and Stuart met with Mark Greaves from The Princess Foundation as well as a representative from East Ayrshire Council. The Japanese Knotweed through the town centre had been controlled in 2012 but there is still some work to do in certain areas. 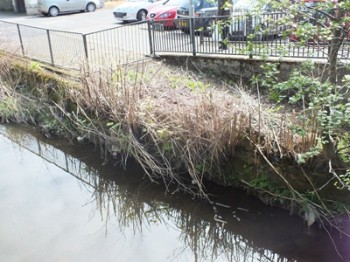 Japanese Knotweed on The Glaisnock Water

We were keen to help with this project and provide advice when it comes to Japanese Knotweed (JK). We advised that it was not wise to choose any site with JK present, even if no regrowth had occurred after control. With this in mind we walked the length of the town stretch and managed to pick two sites where there was no JK present. Benches will be installed in these areas during stage two of the project. The sites are pictured below. 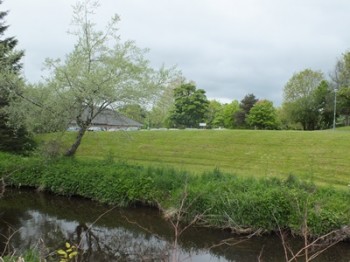 Site on the right bank near the medical centre

Although there is JK on the left bank (in the foreground of the photo), the right bank was clear and there was also a natural amphitheatre present which is perfect for a seated area. The next site was found much further upstream, this time it was on the left bank just across the footbridge from ASDA and downstream of the Cumnock Juniors football ground. 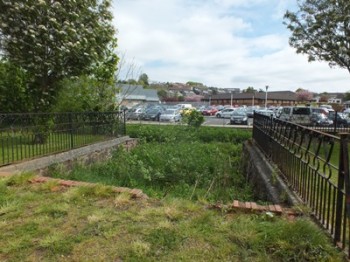 ART has staff that are trained in the use of industrial strimmers/brushcutters so we offered to clear this area. We did advise that river bank itself was very important in these areas as it was one of the few natural habitats left. We were keen to see this left in place so it was agreed that we would clear the walled area above and leave the bank alone like the site near the medical centre.

ART will assist where required and provide advice throughout this project but in the mean time we would like people to offer assistance and help with the clean-up on the 23rd. If you would like to help then please get in touch on 01292 525142