Giant Hogweed control started back in May and has now been completed. Contractors controlled Giant Hogweed on the following catchments – Ayr, Coyle, Irvine, Annick, Garnock and selected coastal burns. ART staff along with some volunteers also controlled outlying areas where the plant was a threat to the control strategy. 2013 boasted perfect growing conditions for Giant Hogweed and once the contractors had gone over their catchments once, it was evident that new flowering  plants were popping up all over the place, this was down to the weather and soil conditions being perfect for the plant. One landowner on the River Ayr stated that everything was dead after the contractors had been but two weeks later flowering plants just appeared from nowhere. The contractors were then deployed to go over each catchment again so that no plants were missed. 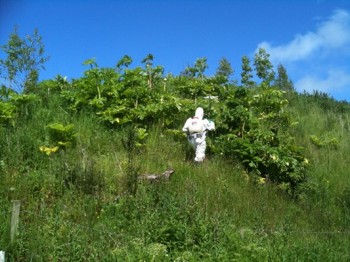 It is very difficult to make sure that every last plant has been dealt with and with seed heads now formed we need to deal with any that are left. If you see any please report them to Gordon on 01292 525142.

For 2013 we have managed to use some our control budget to award two tenders to control Himalayan Balsam on the River Irvine and the Rumbling Burn which lies between Prestwick and Troon. Gary Anderson and a group of young volunteers from Galston Angling Club cleared plants from the upper reaches right down to the confluence of the Cessnock Water and the River Irvine.  This was a massive help to the control strategy for 2013 as it allowed us to start the contractor further downstream than expected. 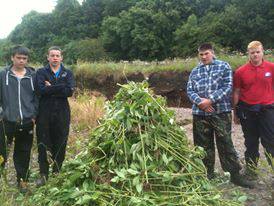 Some of the lads from Galston A.C and one of the many piles of Balsam that they pulled

Our contractor is now busy clearing the plants downstream from from where the volunteers left off and have now reached the Caprington area. With a few days left on the contract they will continue downstream as far as possible. ART staff have also been pulling Himalayan Balsam on the River Doon while out surveying so the plant should now be cleared from the main stem of the river.

We are also planning a Balsam Bashing day on the Chapleton Burn which is a tributary of the River Doon, this is likely to be next Wednesday the 14th of August so if anyone feels they can lend a hand, please call Gordon on 01292 525142

With the success of last years control strategy we will again mostly be spraying the Japanese Knotweed in September, this is when the plant is in full flower. We will however be carrying out some stem injection in certain areas and this control will begin as soon as the contractor has finished the Himalayan Balsam contracts. We will be controlling the plant under the CIRB project using a contractor on the following catchments – Ayr, Irvine, Upper Girvan, Garnock and the Pow Burn. We also hope to control the plant on the Annick using ART staff and volunteers that are willing to help.

We now have over 25 fully trained volunteers, a large portion of these were trained through the CIRB project to PA6AW level. We also have a PA6AW training course lined up for the 20th and 21st of August and still have a couple of places left, If you would like to get involved please let me know asap.

← Too much ‘Assel’ getting to Markhill. CIRB – upcoming project events →