As a result of the pollution incident on the Fenwick Water on Monday, we decided that it was appropriate to do some assessment of the impact. Helen and I armed with the electrofishing equipment headed to Townhead, just a short distance downstream of the area affected by the pollution but crucially below the confluence with the Craufurdland Water. If there were dead fish at this point then I would have been really concerned but thankfully, we didn’t find any any although the numbers of fish we found weren’t great, I suspect that is more to do with habitat than anything else. We found reasonable numbers of salmon and trout in the site. The salmon were almost certainly naturally produce which is really encouraging as it was only in 2012 that we completed the Black Rocks barrier easement. It appears that the pollution was diluted downstream of the confluence with the Craufurdland. In total, approximately 900m of river have been affected. It could have been much worse! 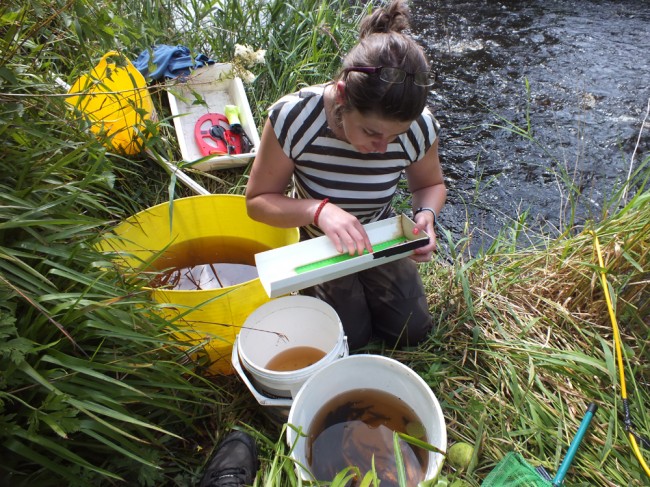 Helen measuring the catch at Townhead.

I reported the pollution to the Kilmarnock Standard newspaper yesterday morning in the hope that whoever was responsible may read the article and realise the impact of their actions. Their photographer arrived and asked Helen to smile nicely for the camera! Tipping chemicals down drains isn’t acceptable (that is presuming this was the cause and that’s by no means certain). I spoke with SEPA’s attending officer yesterday morning before heading out and was informed that there was another incident about two weeks ago on the same burn but this time it was linked to sewage. Results of their lab samples will take a few days and I’m keen to hear what they find. SEPA were back at the affected area yesterday looking for further clues. 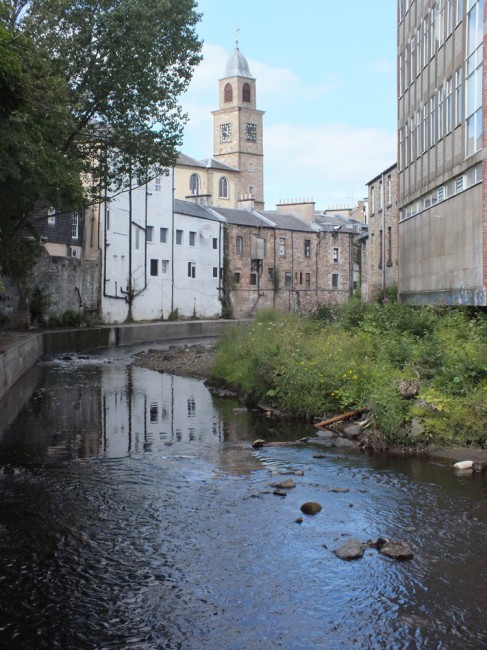 Reassured that the pollution had been diluted and hadn’t impacted much beyond the lower Fenwick Water, we headed downstream to look at the Howard Park area where Scottish Water had been working in 2012 and 2013. This area previously had supported thousands of salmon and trout and we are contracted to monitor the recover until 2015. We fished 2 sites within the works area where the river had been reduced to half its width over 2 seasons (check our old blog posts for more info on this). Whilst numbers were lower than expected at the first site, the second site was more encouraging. Watched by a few spectators and the occasional heckler (the hazards of working in a town centre) we recorded out catches and headed home. I will have to analyse the results fully but I think we can rest easy that the Kilmarnock Water is recovering fine. A few more boulders would have improved results at the first site in the park but I’m sure this can be addressed. 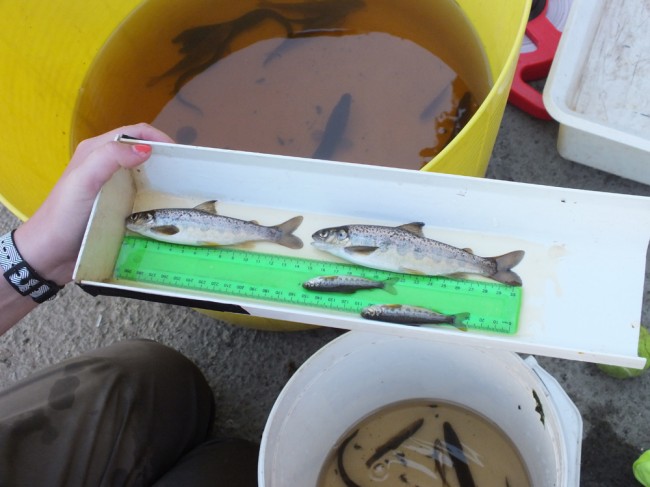 At the time of the works, we highlighted to Scottish Water our concerns that the works had destabilised the weir at the top of the works area. This had been a problem area for fish migration but as the weir had started to collapse during the works, we felt Scottish Wate would have been well advised to address this before leaving the site. A main swear flows through the pipe buried on the weir crest. Yesterday gave me another opportunity to have a look at the weir. It has collapse considerably since my last visit. I have raised this issue with SEPA recently and they are speaking to Scottish Water. I will try to get an update and see what’s to happen here but I believe SEPA may require reinstatement of the weir back to to it’s original condition (which would recreate a problem) in which case a fish pass is required. I suggested that stabilisation of the structure in its current state may be better for fish passage but if I recall rightly would be out with the CAR licences issued for the works. Lets hope an adequate solution can be found soon as inactivity  could lead to total collapse of the structure, resulting in a major pollution problem that won’t be easy to fix. I will contact SEPA and Scottish Water for an update. 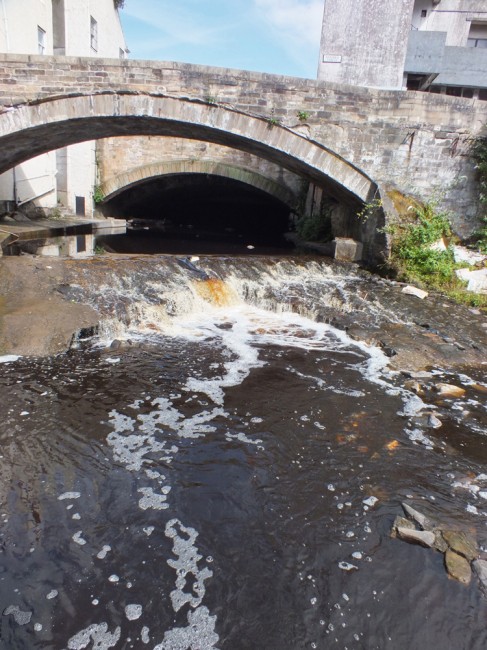 Fish passage has been much improved by the collapse of the weir however there needs to be a technical solution implemented here before the weir collapses further and possibly leads to a major pollution incident  (a main sewear runs across the crest of the weir).  There can be no quick fixes here but fish passage must be maintained.