Over the holiday period, the Kilmarnock Water rose to one of the highest levels recorded in the last 10 years and predictably, there was a mass of timber carried downstream. At the new box culvert bridge being installed to replace the old ford, a substantial quantity of this fallen timber is trapped blocking all 4 box culverts. The majority of the flow now passes around the outside of the bridge apron and has caused considerable scour on either bank. The fish pass culvert on the right bank is completely block throughout its length. 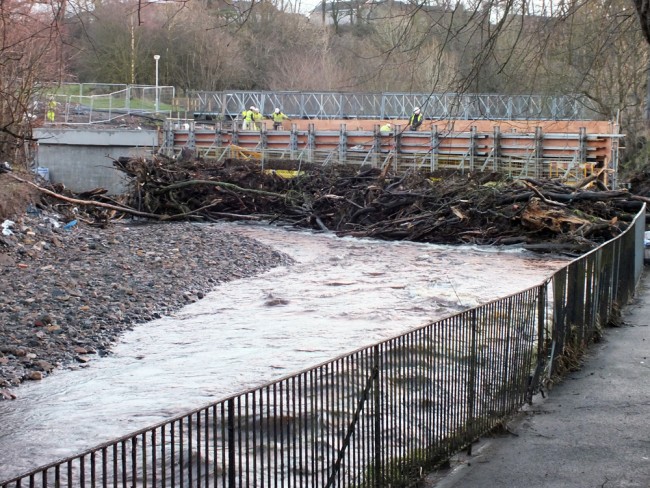 Tonnes of fallen timber wedged against the upstream end of the culverts. With this type of design, timber build up is inevitable and will require ongoing management, but admittedly, this is extreme.

Having received a couple of reports about the blockage, I dropped into the site today to discuss the situation with the engineer and to see what impact this may have on completion timescales. He informed me that had the wing walls been poured before the flood, then it was likely that the bridge would have overtopped due to the volume of water and quantity of timber built up. Due to the amount of formwork still in place around the bridge, the contractors are reluctant to just pull the timber free and are preparing to remove it carefully starting next Monday so hopefully there won’t be any more water between now and then. Any damage to the structure is unknown until the trees and debris can be removed.

The side walls of the bridge apron will be poured asap. The foundations are in as is much of the steel work but again, this may have suffered some degree of damage. 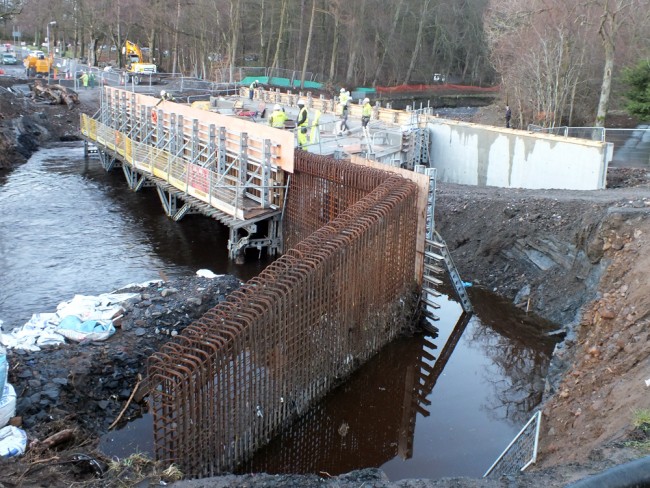 The wall upstream has also suffered damage during the spate and refurbishment wasn’t included in the original remit for the bridge contractors. East Ayrshire are looking at options to stabilise this wall on the dean Castle side of the river asap. I expect the wall’s foundations have suffered some scouring as the hydro morphology of the river continues to change following removal of the ford. Typically, the run and riffle upstream will cut back into the bed in an upstream direction until the river eventually stabilises. We saw this phenomenon at the Newmilns Dam following its removal. 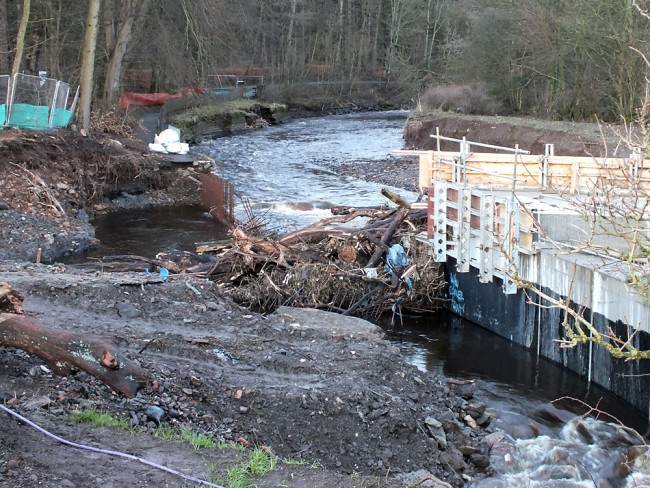 The erosion caused by the blockage can be seen on both banks where the flow diverted around the structure. The steelwork reinforcement is covered with tree trunks and branches and may require some straightening before the work can continue. Upstream, damage to the wall on the Dean Castle bank is visible in this photo

I asked the contractor if they had noticed much gravel movement and he confirmed that with every spate, changes were noticeable and that downstream of the site had received large quantities of mobile substrates. I asked as I’d noticed quite a build up of gravel between the two weirs we built in 2012 at the Black Rocks about a mile downstream. Gravel has been building up there since completion but more noticeably recently.