There can be no doubt in anyone’s mind that the total catches reported from Ayrshire’s rivers last season would be poorer than normal and after collating the available data, we have today submitted returns to the ASFB and District Salmon Fishery Boards. 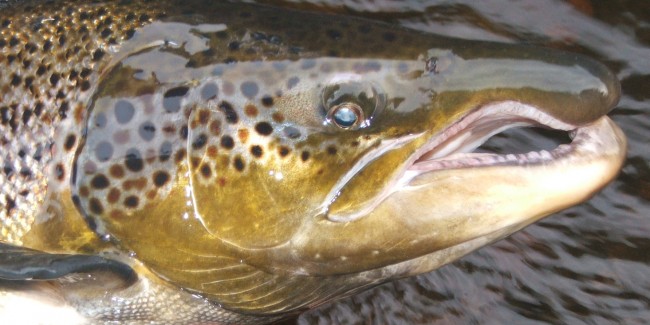 It amazes me that some anglers and owners  fail to understand the importance of catch returns and the legal requirement to provide details of catches when requested to do so. It is an offence under the Conservation of Salmon (Collection of Statistics) Scotland Regulations 2006 to fail to provide catch details when requested to do so by the Boards. None the less, on every river there were returns missing so effectively the reported figures are incomplete. Whether the missing returns include catches or not, they are required for completeness. This only adds weight to the Government’s plans to bring in  mandatory catch and release for conservation of salmon stocks in 2016 unless a pre purchased licence and tags are applied for and  bought by riparian owners. Under reporting is likely to lead to fewer licences and tags being issued than other wise would have been.

The Rivers Irvine and Garnock don’t have Boards and Clubs report direct to Scottish Government at Montrose where their returns are collated by officials. Unfortunately the returns only become available in April following completion and publication of the ASFB report that the other rivers are included in. To combat this we report catches a year behind but give an update of the latest angling season. This means that the figures submitted and reported below are from 2013. Both Irvine and Garnock results are included under the Irvine returns. All other river data is from 2014. 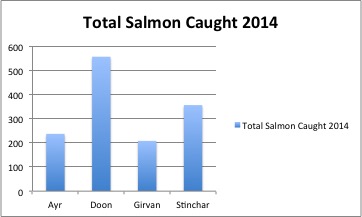 Total salmon caught in 2014 across the 4 Board rivers 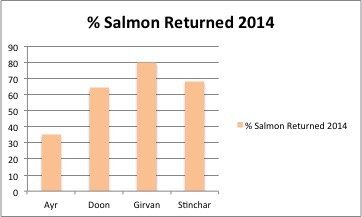 To summarise the returns briefly, I exclude the Irvine data as the catches are not up to date.

The River Ayr, Girvan and Stinchar showed similar performance  with catches falling between 44.9% and 50.2%  of their 10 year averages which can be explained by the long dry summer that prevailed across Ayrshire and lower than normal angling pressure due to unsuitable conditions. The Doon bucked this trend somewhat with rather better catches totalling 62.9% of the 10 year average but this isn’t entirely surprising as the Doon receives compensation flows that allow salmon to run at least some of the river even in long periods of dry weather. Angling pressure was undoubtedly reduced on the Doon too this year and this will have contributed to the poorer than normal results.

The total catches were poor overall and this was no surprise on the Ayr in particular where we have been reporting poor juvenile stocks for many years. Interestingly, despite the many warnings asking anglers to return salmon to conserve stocks, catch and release figures on the Ayr dropped back to 35%. This is the poorest release rate in Ayrshire currently reported and will almost certainly be one of the worst in Scotland. Just imagine how many more juveniles could have been produced in the catchment from the 153 salmon killed in 2014!

The Doon performed best of all Ayrshire rivers with the upper reaches producing more fish than normal. The total catch of 556 salmon will be amongst the best of west coast Scottish rivers this year as low water affected most of this side of the country. Time will tell but it won’t be long until the ASFB report is published. There is little point in speculating so I’ll update this post once it becomes available.

The Doon, Girvan and Stinchar all returned a respectable percentage of the catch with the Girvan hitting Scottish Government targets of 80%, the first time any river has achieved this in Ayrshire. Well done to those anglers.

Angling effort in 2014 was reduced across the catchments due to the weather but on the Doon, several once productive beats are now closed to syndicates and guest rods. Others such as Torr just don’t let fishing any more probably due to lack of demand. I do believe that had more rods been out, then more fish would have been caught as there was good fishing in the upper river and they don’t fly there. On the Lugar, Cumnock Club didn’t catch their first salmon until the last month of the season. The Girvan and Stinchar both received little angling pressure until late in the season. 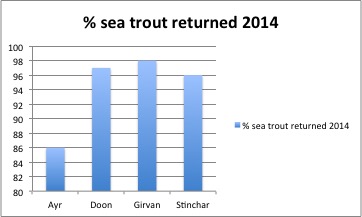 Sea trout are mostly released these days and this has to be good for the future stocks.

Sea trout results were up slightly across most rivers but still at low levels. Release rates for sea trout are better than salmon ranging from 86% released on the Ayr to 98% released on the Girvan. Hardly anyone fishes for sea trout these days and we know they are frequently under reported. we received many calls and information  claiming there were more sea trout around in 2014 but reported catches didn’t quite meet our expectations. I know of one angler on the Ayr who caught 23 but his club failed to record a single fish!  I can’t help but feel that if more anglers went out at night targeting them, then the results may be significantly better.

Reports from the bailiffs and Art staff indicated that on the whole, the rivers were well stocked at spawning time. Both the Girvan and Stinchar were described as ‘Stuffed’. Even the upper Ayr had reports of more fish than in recent years. A poor year for angling often leads to a good year for spawning. Of course some will claim the high water levels will have washed out the redds but we don’t see this as too big a problem as even the Stinchar where the gravel is more mobile than on other rivers seems to manage to produce excellent juvenile numbers following wet winters. once again, there is no point speculating and we will just have to wait to see what the electrofishing results reveal in the summer.