Update on the Crayfish situation

Following our confirmation that American Signal Crayfish have been found in the Ayr catchment earlier this week, we have been continuing to trap in an effort to establish the extent of the problem. We aren’t attempting to control these creatures but rather establish the scale of the problem and their distribution. Control measures in rivers and most freshwater environments is generally impossible for many reasons but we will report more on what’s required in due course once we’ve completed our initial investigations. 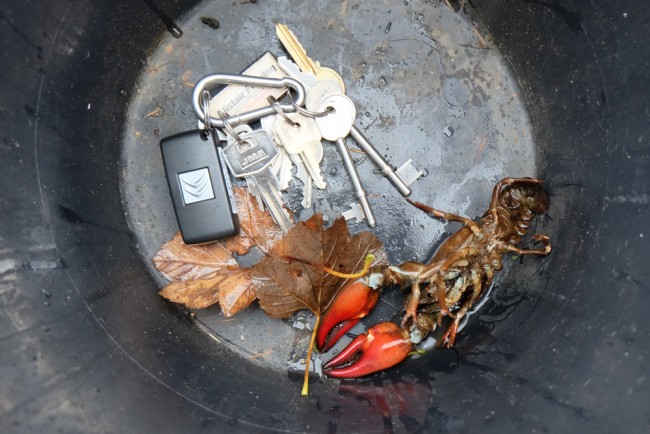 The mature adult male of approximately 41/2 inches in length that we captured earlier this week.

Heading into winter, we have very limited time before water temperature will put an and to this monitoring as these are cold blooded invertebrates that will slow down as water temperatures drop, becoming virtually inactive over the next few months. Consequently we’ve been focussed on maximising trapping effort and that’s meant rapidly constructing as many traps as possible. We’ve been very generously aided by volunteers who have cut, bent and twisted mesh panels together to make some very good looking traps. Next week we should be able to deploy 30+ traps rather than the 6 we started with. Other supporters lent and donated equipment and materials such is the concern that these invaders bring. 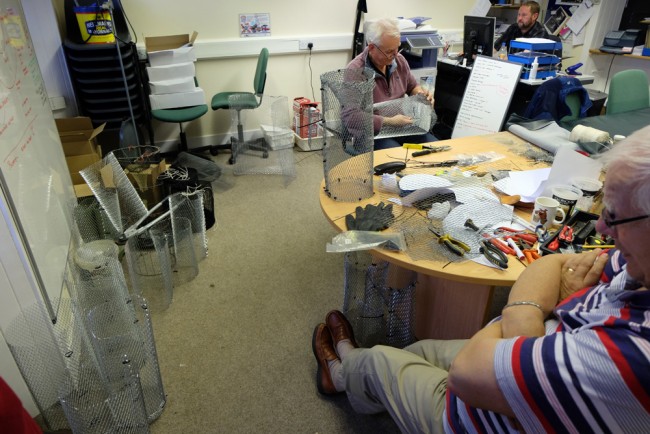 Volunteers and supporters of the Trust laboriously fabricating traps from basic materials. Thanks to them all. What a difference your support makes and the staff really appreciate your assistance.

It is essential to make clear from the outset that  trapping Crayfish is not something that should be attempted by anyone. It is a licensed activity and an illegal method and therefore without a licence, anyone caught trapping could face prosecution on several counts. Neither will trapping be an effective method of eradication or control unless the numbers present are so small and we trap every single one before they have the opportunity to breed and that is resuming they haven’t already!

After 4 days trapping we have only managed to catch the single large male reported earlier this week. The traps we have used so far have large mesh and we are concerned that we may be missing smaller year classes and consequently, quickly put out a call for volunteers to assist with trap building. 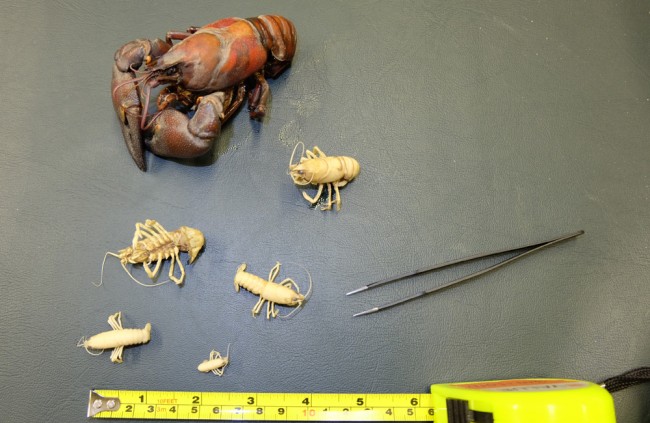 Compare the sizes of American Signal Crayfish that we may be attempting to catch. The large one is the one we captured this week. The others (bleached by a few years in alcohol) are typical of what we may expect to find if the population is well established.

Goerge and Des came along today to make traps and Dumper delivered a few materials this morning. Thanks to all these supporters without who’s assistance we would have been struggling to expand our trapping effort next week. SNH and SEPA will be kept up to date of our findings and we will keep in touch with them as we all attempt to work out the strategies required for containment.