Ahead of fitting smolt curtains in Loch Doon near the entrance to the fish pass at the dam, we first had to work out the depth and the potential rise/fall in water levels to ensure that the anchors don’t lift or drag during the time the curtain is installed. Being the best weather we’ve had for some time, we decided to brave the cold and launch the boats. Approaching the dam in an icy cold wind.

We always need a work boat and a rescue craft in case something goes wrong so Muir was on standby as Struan and Stuart set off to survey the depth where the curtains will hang. Heading towards the dam with Struan and Brewster enjoying the trip. We launched at the angling club’s launch site and are grateful to them for providing access. 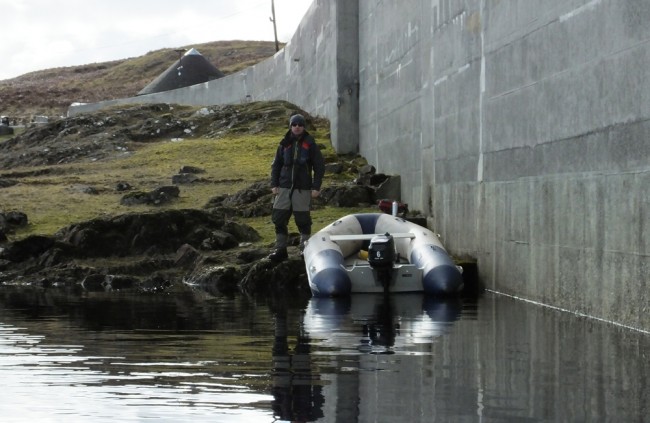 Muir drew the short straw and remained at the ready with the rescue boat should it be required.

The curtains are designed to guide smolts towards the tower in the dam where the fish ladder entrance lies. Hopefully once close to the tower the fish will feel the draw of water into the ladder and find their way downstream. Accessing the fish pass from the loch has long thought to be one of the biggest problems for downstream migration. Into the ladder, we are about to install a new counter system to read transmitters inserted into smolts. We will be trapping smolts as they leave burns later this spring and inserting these tags. We should be able to count fish out and then back in once they return from the sea in years to come. This will allow us to work out how long it takes for smolts leaving the burns to reach the fish ladder (if at all).  We will also be able to identify which burns are most productive by the smolt traps.

Tomorrow we will rig the moorings and curtain and should soon be back to install them on the next suitable day. These curtains will remain in place for several months to ensure that we’ve given the smolts ample time to make their way downstream. Perhaps next year we won’t install the curtains to allow a direct comparison of results to be made. By proving where the problems lie, focus can then transfer to improvements. Ultimately, this work will inform Scottish Power, the DSFB and ourselves how best to manage water levels during migration and ways to improve fish passage at the dam. 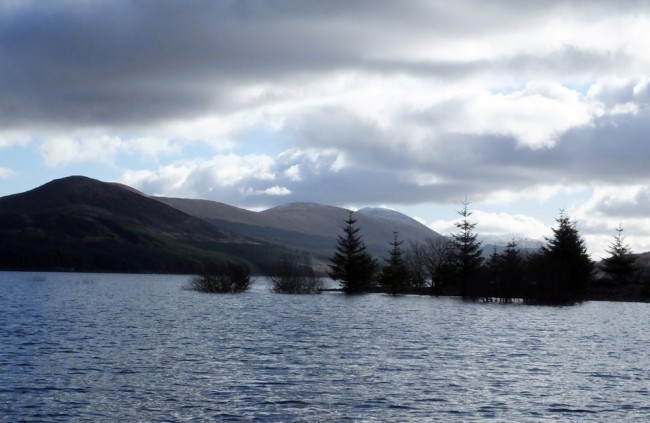 Submerged trees and bushes around the banks

Heading back to dry land we explored Muck Bay and found a few fish on the sounder. The loch level was high as it has been all winter and many bankside features were hidden below the surface. Compared to the low levels we saw most of last summer, it’s quite incredible how much extra water there is in the loch. The sounder revealed a couple of hotspots for fish