Update on the work at Loch Doon

When we arrived to continue our salmon tagging on Thursday morning, Carrick Lane was still low and fishable despite some overnight rain so we quickly secured another sample of salmon pre smolts from the burn. Tagging is time consuming due to all the recording we are doing and by the time we sat down to have lunch, the river was rising quickly. The forecasters hadn’t been all wrong and the rain was pretty constant by now. We processed around 30 fish from the Carrick Lane taking the total to around 60 before we were beaten by rising water. 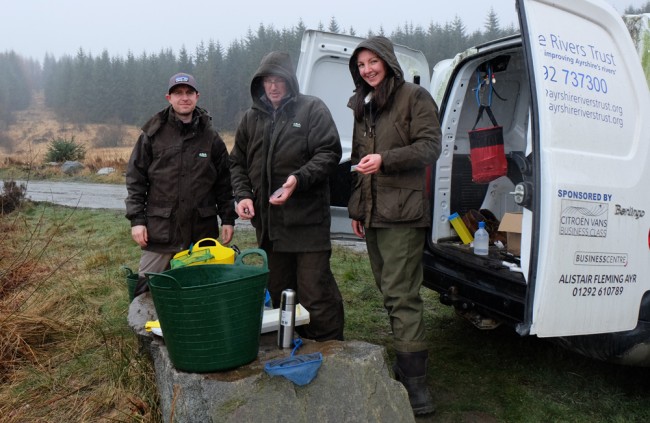 The team at Carrick Lane on Thursday…wet and happy.

We decided to head to the Garple Water where Loch Finlas would buffer any rapid rise in water levels. This was a good move and the Garple as suspected, was still fishable despite the horrible weather.  We secure another healthy sample of naturally produced salmon rather than the hatchery stocked fish that we assumed we were finding in Carrick Lane (the Lane was stocked in 2014). The salmon in the Garple are naturally produced as it hasn’t been stocked with hatchery fish since 2009. Two hen salmon and a cock were moved to the lower Garple during winter 2014 when bailiffs came across them in Ness Glen but whether they spawned there or elsewhere, we just don’t know. We know of several spawning sites in the Garple and the parr numbers we’ve found would support this. Additionally, we’ve already tagged and clipped a few salmon in the upper reaches last summer and so far only two of them have turned up so we suspect there are still quite a few fish to descend to the lower burn and loch yet. We intend to set up a fykke net smolt trap next week and start monitoring this daily. This is an incredibly labour intensive project and smolt  trapping may only be realistic for short periods in the hope we coincide our effort with he main run. 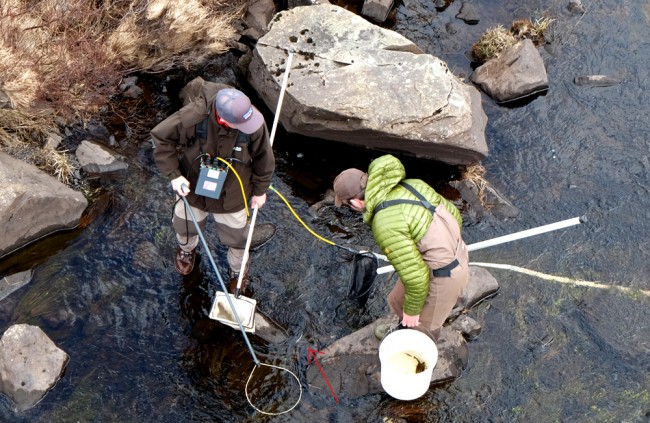 Electro fishing on the Garple. A salmon pre smolt can be seen at the arrow head but I don’t think Struan (holding the bucket) had seen it at this point. Muir is on the anode.

We returned again on Friday morning in rather better weather and completed electrofishing on the lower Garple. The remaining fish we hope to trap in the smolt trap. Again we managed to secure reasonably encouraging numbers from the areas fished and all were tagged and returned safely with the exception of a single casualty. These things happen occasionally but the data we will get far outweighs the loss. 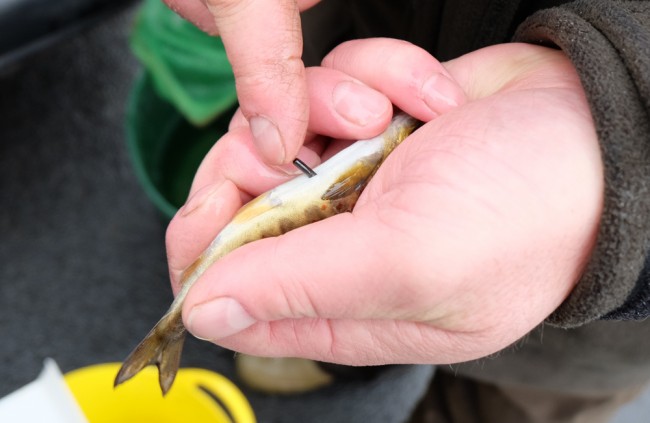 A close up of a tag going into the body cavity. 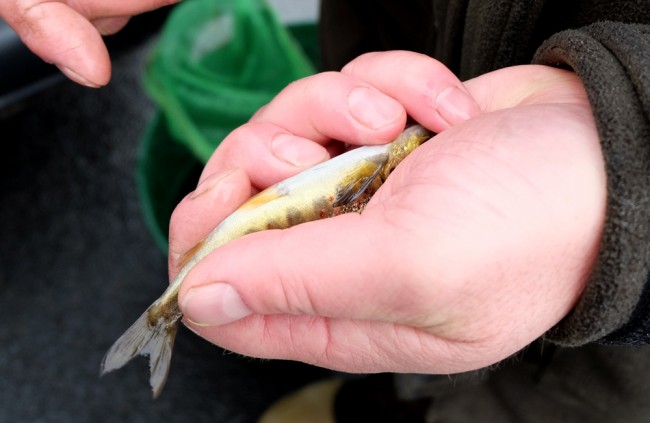 A second later and it’s in. 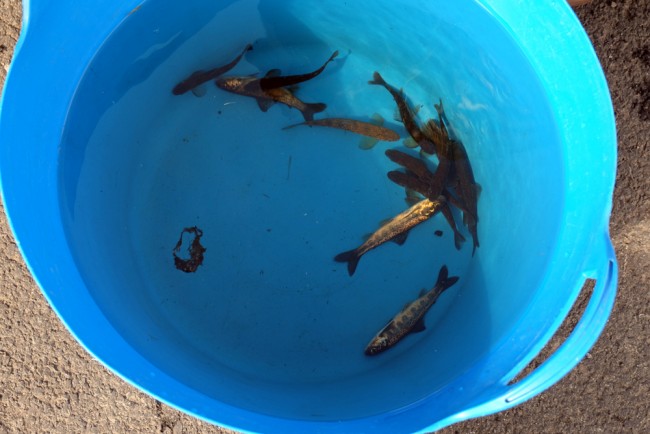 Once the tags are in, the adipose fin is clipped and the fish are placed in a recovery bucket for about half an hour to make sure they are all ok before release. In the photos above, the three most recently anaesthetised fish have yet to recover while the others are all swimming about fine.

Scale samples have been taken from many of the salmon we’ve found and will be read to confirm their ages. I briefly looked at samples from some of the smallest and largest that we caught to see how the ages varied. The smallest salmon we caught was 88mm and from Carrick Lane. This turned out to be a 1 year old parr (fry last year, overwintered and just entering it’s second year of life). This was a remarkable wee fish as there was no stocking in Carrick Lane last year and therefore must be a naturally produced salmon that we caught above the falls. Consequently, we can’t be certain that all the parr we’ve captured in Carrick Lane are a result of the hatchery stocking although I do suspect many are. I believe all hatchery produced fry should be clipped to allow easy identification. Unless this is performed, how can anyone realistically assess success or failure?

The largest fish measured 141mm from the Garple and was a 2 year old fish. The smallest 2 year old fish we caught came from Carrick Lane at 100mm, although on Friday we caught smaller (97mm) that I suspect is the same age but I’ve yet to look at the scales. 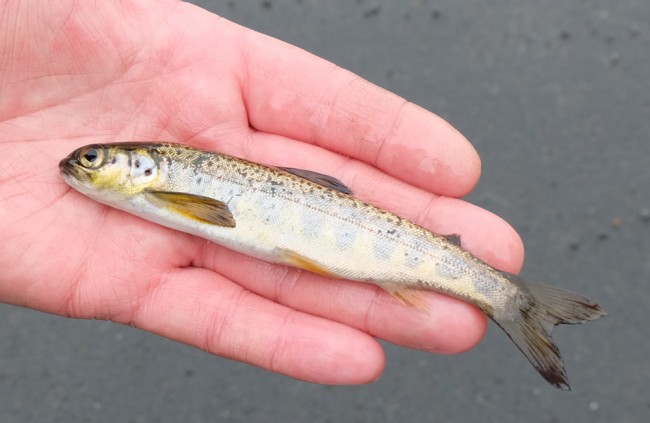 At 141mm, this is the largest salmon we have tagged so far and shows signs of smoltification (developing a silvery sheen and the fins are darkening) 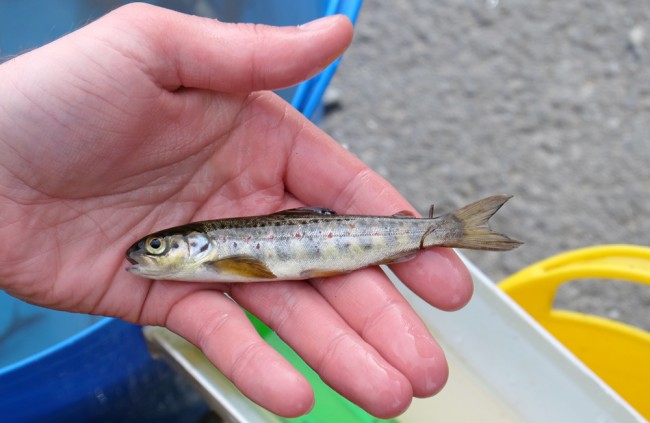 Another pre smolt that is just starting to change. This one was 128mm long 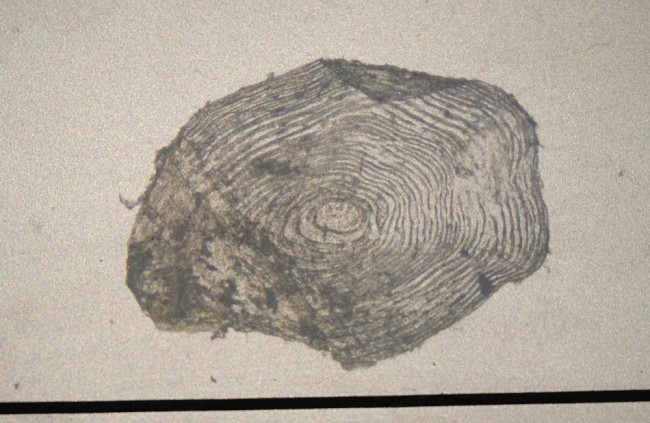 Scale reading aged the fish at 2 years old. This scale shown no recent growth (as is usual over winter) but within a month or so it will. It will then be described as a 2+ or an S2 smolt

It will be interesting to see whether all these fish leave the burns shortly as smolts or whether some remain a further year. Not all exhibited signs of smolting but it is early days yet. The smolt trap will be used to work out when they leave the burns for the loch on their migration and how long it takes them to find the ladder. More updates should follow next week.

When at the loch today, there were a number of people about and we saw a couple of float tubers fishing the bays and margins as well as some bait fishers next to the dam. I didn’t get a chance  to speak to the float tubers but it would be interesting to know if they caught and salmon parr or smolts near the Garple. 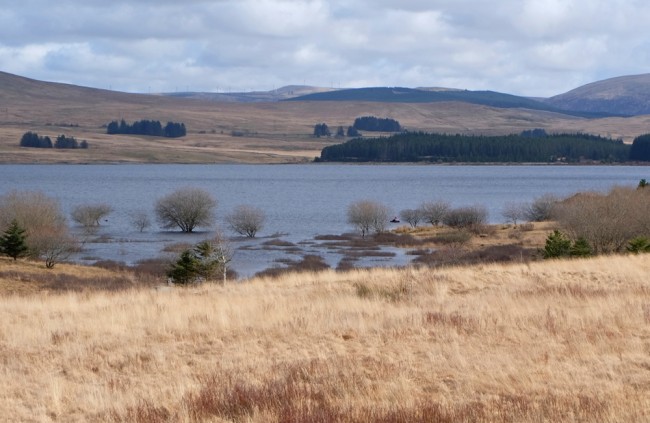