We recommenced our American signal crayfish (ASC) trapping efforts on Tuesday of this week on the tributary of the Ayr where we caught a single large male towards the end of last year. After a late spring, water temperatures have warmed sufficiently for trapping to become effective. ASC become very immobile when water temperatures are low during the winter months and as such trapping is somewhat futile. However with warmer temperatures and slightly clearer schedules the staff where able to set 18 traps on Tuesday. This week we had another report of crayfish from this burn from a young angler but we have no proof of this and despite our best efforts to locate the dead specimen, we haven’t been able to and therefore this must go down as unconfirmed. 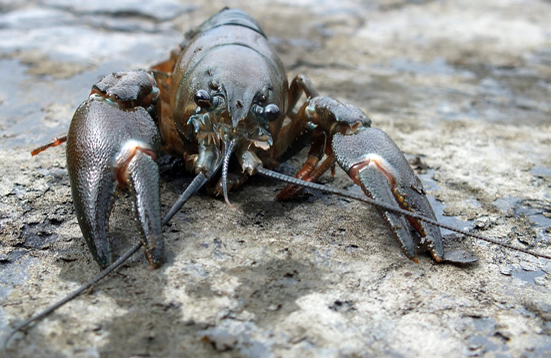 A large crayfish killed at Ballachulish showing the natural colours immediately after removal from the water. Only the underside of the claws are red.  It’s obvious why they are difficult to spot under normal conditions.

As a requirement of the trapping licence (provided by SNH) we are required to check the traps once every 24 hours. So far we have yet to capture another ASC. Although it unlikely we trapped the only one last November, we are vaguely optimistic that this may have been a one-off. However we will be continuing to trap until we are either capture more or feel that we have exhausted our available time for this. Unfortunately nobody can prove their absence by trapping alone, and through capturing one all we can say with confidence is that to date there was one ASC in the watercourse last November. Despite this type of work being unfunded and somewhat of a drain on the Trust’s limited resources, this is vital work that cannot be ignored. Anyone who discovers what they think to be an ASC should photograph the specimen and then kill it and try and obtain GPS coordinates of its location and inform ART of the discovery as soon as they can.