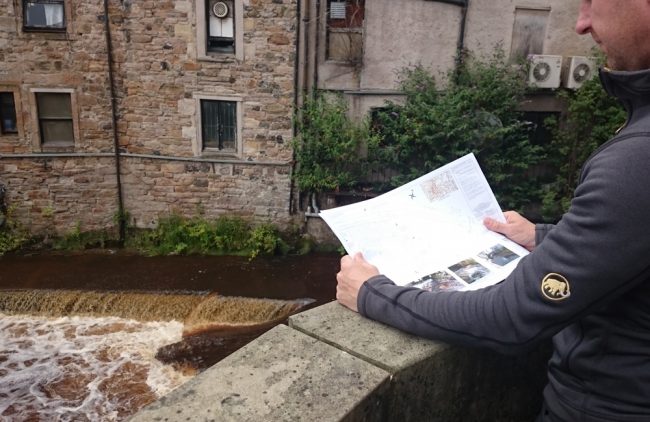 Muir studying the drawings on site.

We received design drawings of a rock ramp fish pass for consultation from Scottish Water today and nipped up to Cheapside Street in Kilmarnock to cast fresh eyes over the weir and drawings. We first highlighted the issues over the partial collapse of this weir when the contractors were working on the town centre Storm Water Overflow scheme back in 2012 /13. Following discussions and a site meeting with Scottish Water, SEPA, KAC and ourselves, we appear to be making progress. Our suggestion for a rock ramp rather than a more technical solution (a Larinier or similar fish pass) is the preferred option and hopefully the design will meet requirements and require less maintenance than other structures. We are assessing this at the moment.

It’s taken several years to get to this stage but hopefully soon, we will be able to report progress. The weir can’t be removed due to a sewage pipe running through the middle of it. As the weir is eroding, there is a risk that it may collapse rupturing the pipe and spilling thousands of gallons of sewage into the river.

KAC and the RIAIA have been sent drawings for comment and we will feed back the fisheries responses to Scottish Water shortly. Lets hope we see this completed in 2016. 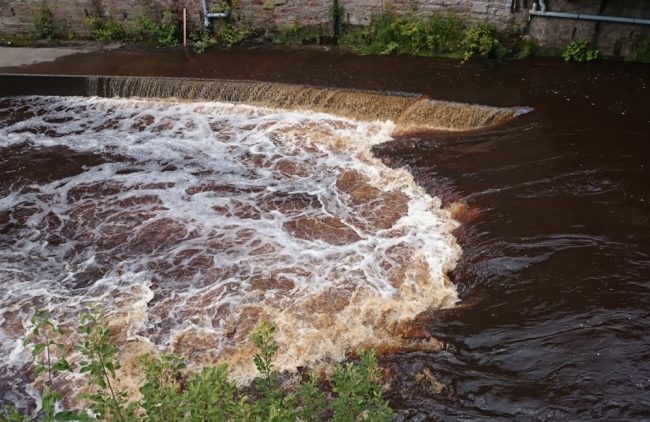 The weir during a spate today.

There was a good spate running today and that reminds me to reinforce the warnings about adequate escape routes for the workforce from the river channel. In 2012, a flash flood saw emergency services mobilised to rescue a digger driver after becoming stranded in his machine as the river rose during a flash flood. The digger and two dumpers were lost during that incident.

← Greenock Water erosion…addressing the problems Light at the end of the tunnel? →