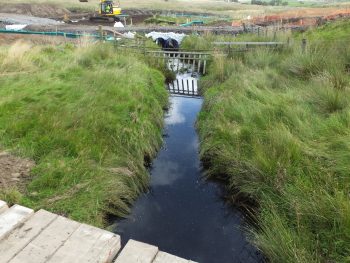 This long deep pool had 20-30 trout hiding under the banks. The largest was approximately 10 inches long.

As ever health and safety is paramount and following a walkover of the site and a risk assessment we were ready to begin electrofishing. 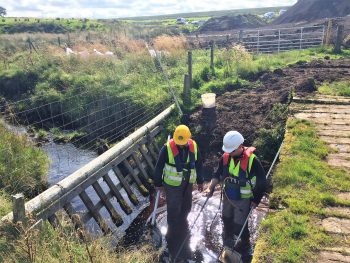 Muir and Gordon checking every nook and cranny for fish.

As we worked our way upstream, many of the on looking workmen were surprised to see so many trout appear from underneath the banks of such a small watercourse. Multiple runs through the site yielded 84 brown trout, 16 three-spined stickleback, 3 minnows and 12 stone loach, giving a total of 115 fish. These fish were relocated downstream of the works to suitable habitats. 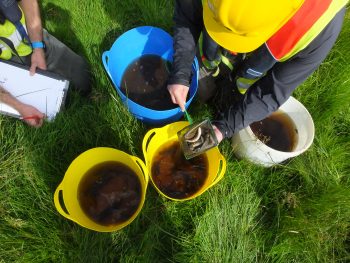 Counting the catch: it’s important for us to know the species caught and how many were present.

After relocating the fish, the flow was diverted into the temporary channel. This channel is lined with a fabric membrane to help reduce the amounts of sediment entering the watercourse. We remained on site as the natural channel drained to ensure any fish that had evaded capture could be removed from the site. There were no signs of any fish remaining and we left satisfied that we had removed all the inhabitants of the diverted section of watercourse. 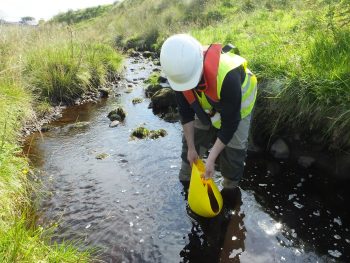 Silt protection in the form of loose hay bales was installed at the bottom of the site. Straw bales can be an effective method of capturing silt. This is an important preventative measure as any silt arising from the works has the potential to smother substrates downstream.  When working in and around water there will always be issues concerning silt, however with thought and planning these concerns can often be mitigated against, cheaply and effectively. 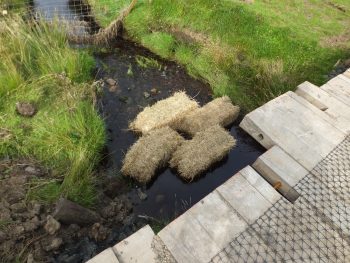 Bales are an effective means of catching suspended sediment.