In 2015 works were underway to repair parts of the Kinclair Viaduct on the Stinchar catchment. These repairs were to include bank reinforcements on the burn which runs under the viaduct and joins the Water of Assel about 50m downstream of the viaduct.

Last year Struan and I carried out some electrofishing surveys, which would be repeated this year, in order to determine the effects of the works on the fish populations.

Before any works had been carried out on he burn it was in bad shape and for the most part there was little to encourage fish to use the burn for spawning. We did find four salmon parr and a few trout fry which was very surprising considering the lack of suitable substrates. For the most part the burn was little more than a clay flume as shown in the photos below. 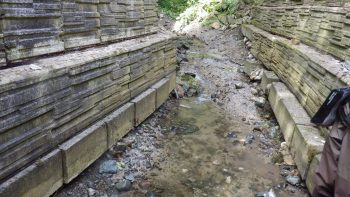 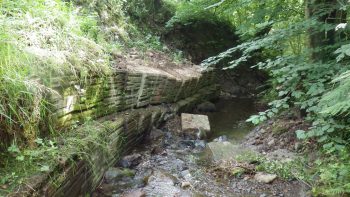 The works were completed last year and today Muir and I returned to the site to carry out a further electrofishing survey. The burn had changed dramatically and although it doesn’t appear natural, the boulder placements are now trapping substrates suitable for spawning salmon and trout as well as providing oxygenated water. The fish population has greatly improved and we found 32 salmon fry and over 20 trout fry which shows that both salmon and trout utilised this burn for spawning last winter. It is always encouraging to see positive results from works such as this and we hope that fish continue to use this burn for spawning in the years to come. 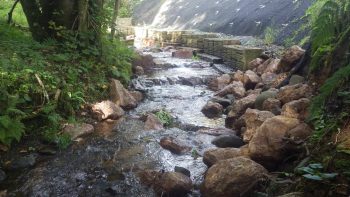 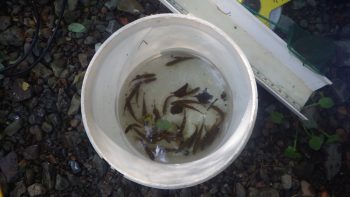 A bucket of salmon and trout fry from the 2016 survey