As per previous posts, we held our charity fundraising dinner on Friday the 18th of November. The event was attended by around 100 people and helped raise some valuable funds for the Trust. Altogether we managed to raise a very respectable £2302 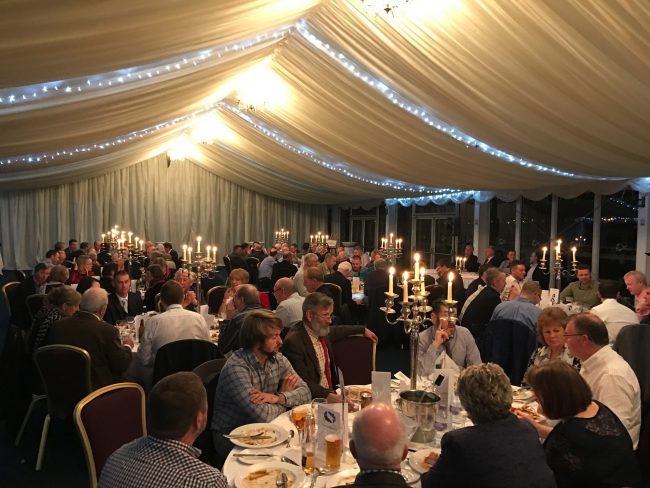 Unfortunately the event wasn’t without issues and we must apologise to all those who attended for the room temperature in the venue. We were assured that the temperature would be kept at an acceptable level throughout our event but this proved not to be the case. This was unacceptable and has been taken up with the venue.

Despite the cold, we enjoyed a three course meal followed by our speaker Mr Phil Differ. Phil told tales from his long career as a comedy writer with some funny moments from his past while working with the likes of Tony Roper, Gregor Fisher and Rikkie Fulton.

After a short break we held a raffle with some excellent prizes up for grabs including , football tickets, stadium tours, a banquet meal for four, Fishpal vouchers and much more.

After the raffle it was on to the auction. Our sincere thanks to Andrew Hunter Blair our professional auctioneer for conducting the auction. There were many lots up for grabs including hotel stays, round for 4 at Royal Troon, rare malt whisky, signed rugby ball as well as the usual fishing lots. Andrew was an excellent auctioneer and i’m sure he managed to extract a few extra pound notes from the eager bidders.

We would like to thank all those who attended and stuck it out despite the temperature in the venue. Your support is much appreciated by all at the Trust and without it events like this wouldn’t be possible. We would also like to thank Sir Patrick Hunter Blair for agreeing to be our host for the evening and indeed Andrew for conducting the auction.