I would like to see progress being made in this location as over the years I’ve been with the Trust I’ve seen thousands of tonnes off soil disappear down the Lugar water from this site. 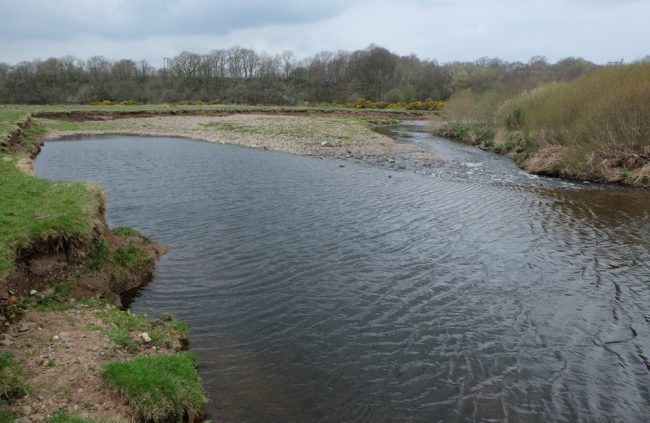 The first bend downstream of the straightened channel. When I first looked at this, the river was where it flows today. Over the years it has cut left handed into the soil bank taking over 30m of bank away. I’ve no doubt that the current channel may change again in the next high water.

Most of this erosion could have been prevented but historic straightening in the 60’s created this situation and livestock access (primarily sheep) accelerates the issue.  Excluding livestock by fencing is know to help stabilise erosion by simply allowing the banks to revegetate and become more resilient to high flows. Sheep and cattle quickly weaken grass and banks become prone to collapse as a result of poor root development and trampling. This situation is exacerbated by historic straightening which shortens the river’s course yet increases the velocity. This is the first bend downstream of the straightened section. Curiously the original course of the river remains wetted nearby and when measured it is nearly double the new length. 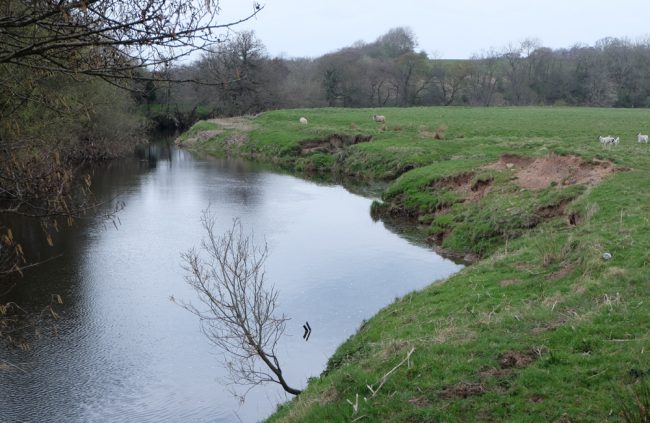 The contrast between each bank couldn’t be greater and the lack of trees is entirely as a result of grazing pressure.

When comparing both banks, it is immediately obvious that the left bank (looking downstream) is devoid of trees. There’s a few gorse bushes that are unpalatable to sheep so they have survived but apart from them, precious little else. It’s a indication that the grazing pressure on this land has been high for years. One substantial tree remains however it’s roots are being eroded by the sheep and I’m sure it won’t be long until a large spate takes it away and a chunk of the bank with it. 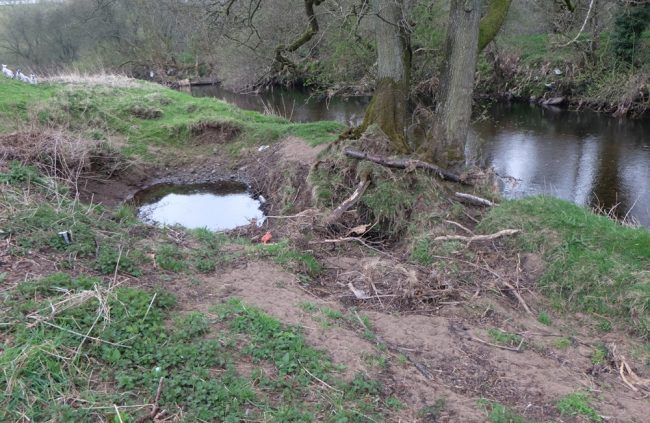 Sheep cause root erosion at mature trees and I doubt it will be long until this one ends up washed away in high water.

Concerns are often expressed that fencing is impossible as high flows will lead to it being ripped out. There may be some truth in that and each area requires individual assessment however in this instance, perhaps the increased velocity leads to the river coming over the bank top during high flows and were the old channel meanders reconnected, then perhaps the whole issue would be resolved. There are concerns that reconnecting the old channel may lead to flooding upstream in an ornamental garden and this would have to be investigated thoroughly first but then again, perhaps the garden has been built in the wrong location? 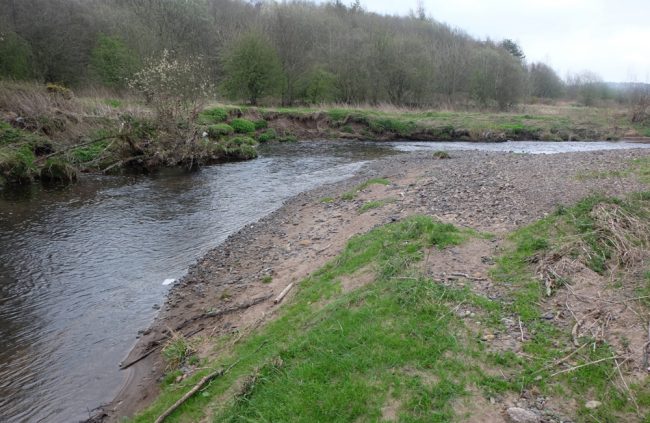 The opposite bank is far more stable but the changing flows are increasing the pressure on it at points and there small scale erosion developing. This may be addressed easilt if done early enough using green engineering techniques such as willow spilling

Fencing would be a step in the right direction. At the moment, the sheep are causing accelerated collapse along a huge length of the river 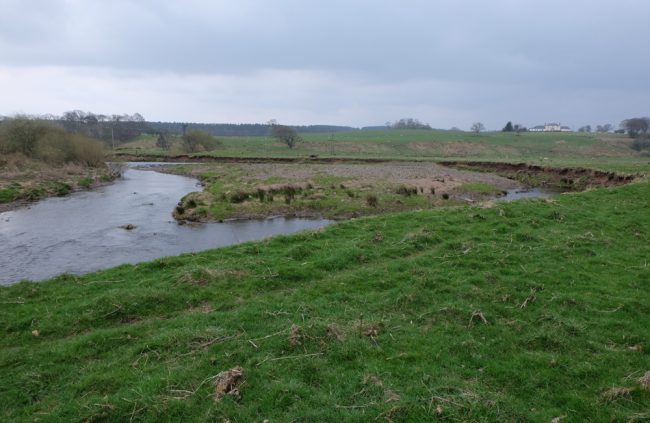 The view upstream today but what will it be like tomorrow?

Solving these issues is fraught with difficulty as everyone’s interests have to be taken into account but I’m sure we should expect better than the current situation of high erosion and reduced water and habitat quality downstream. ART will be trying to make progress with this area over the coming months.

By reducing erosion and excluding livestock, water quality will improve as will the quality of the habitat and fish spawning gravels which are currently impacted by silt. I had hoped SEPA’s diffuse pollution initiate with all the catchment walks and farm visits would have made more improvement by now but still there’s time as the last deadline is 2027 for good ecological status in all waters under Water Framework Directive and River Basin Management Planning. However, as the driver for the diffuse pollution initiative was to protect bathing waters and not to improve fish habitat, perhaps I shouldn’t expect so much? Perhaps we expect too much?  Personally I  don’t think so and do feel that there are obvious routes to force improvement that are being ignored. Cross compliance and Single Farm Payments are subsidies that could be used in a more poignant way to drive improvement on watercourses and water quality. It just isn’t acceptable to most anglers to see continued pollution either diffuse or point source after all the time and money that has been spent on ‘improving’ things.