While undertaking a fairly massive clearance of a timber blockage on the Dyrock yesterday, we were immediately shocked by the levels of livestock poaching (trampling) that were obvious on the riverbank and through the woodland. Naturally we understand that fields provide good grazing for livestock but are fairly concerned when we see broadleaved woodlands used for this purpose and are surprised there aren’t strict regulations governing this practice in place and enforced. It seem a completely unsustainable (at least for the woodland’s survival) and destroys the developing under storeys that are so essential for the future longevity of these copses and larger covers. 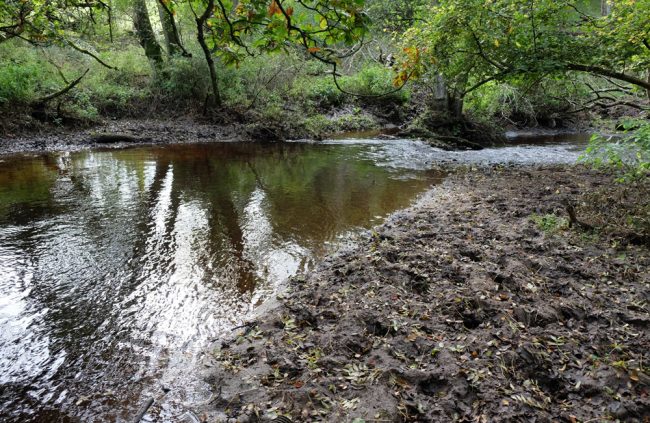 An unacceptable level of livestock poaching in water margins. This destroys fish populations by reducing both spawning success and water quality 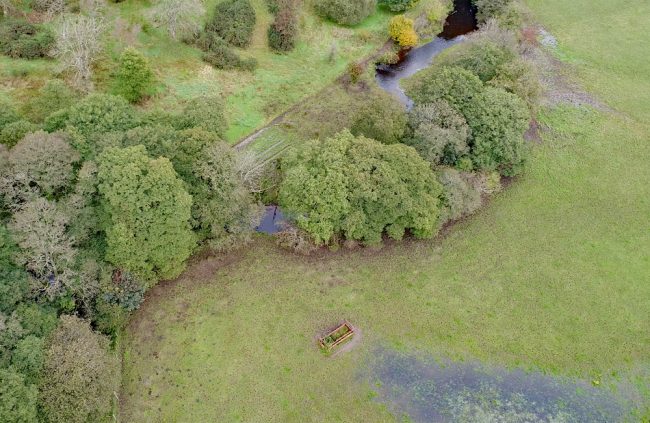 With such obvious livestock issues all around us, we decided to fly the drone from the Girvan up the lower section of this burn to assess other diffuse pollution issues that may be there. Over 1km of burn was surveyed but we found little to celebrate after years of ‘SEPA’s Diffuse Pollution Initiative’. For some unexplained reason, although the Girvan was included within this project,  the Dyrock wasn’t as it was thought to be low risk. We reported failures in this area to SEPA last year and understand that the landowners have since been visited and are soon to erect fencing which they feel ‘won’t survive’ due to the large spates that come down this burn! Perhaps the sensible approach would be to allow greater buffers to protect their investment (fences) or is that just too obvious? 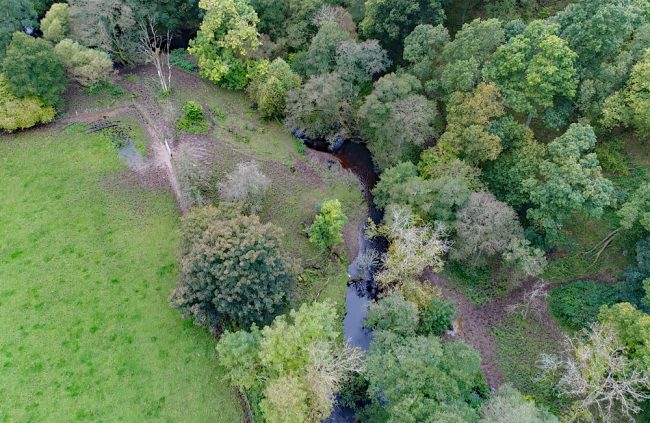 Too late to shut the gate?

While we understand the financial pressures on farms just to survive, we really can’t understand why woodland grazing (destruction) or the pollution of water courses is acceptable in the process. This isn’t an isolated instance of such practices and we see far too many burns impacted and woodland used as supplementary grazing. This isn’t sustainable farming in our eyes and certainly doesn’t meet acceptable standards of good practice.

For a HD video highlighting the failures we saw yesterday, follow this hyperlink and watch in HD https://www.youtube.com/watch?v=Tv9od-8485g 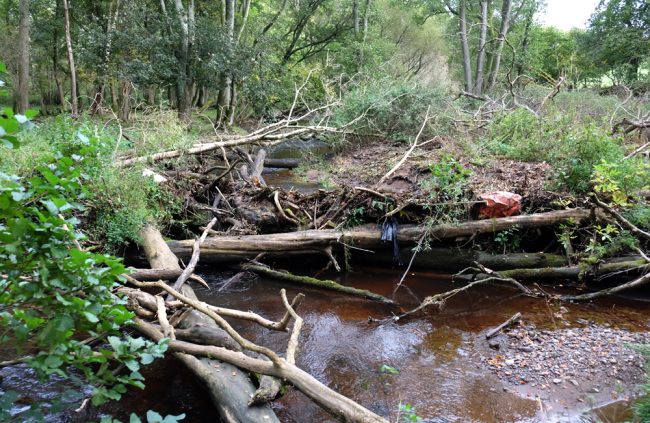 As stated above, we were there primarily to clear a timber blockage the we felt prevented salmon accessing the burn for spawning. We have noticed a lack of juveniles recently that we attributed to this but water quality may also play a part. Clearing the blockage allows fish access and reduces further silt inputs that occur as a result of erosion as the flow was deflected around the sides of the obstruction. 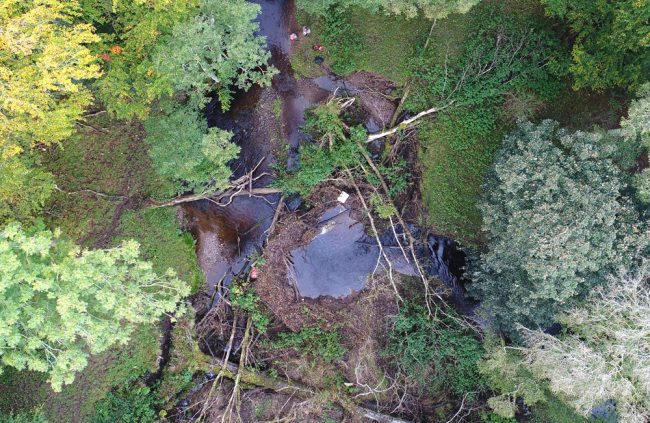 The eroded side channels can be seen from above. Trout may have found their way through but salmon were bound to struggle. 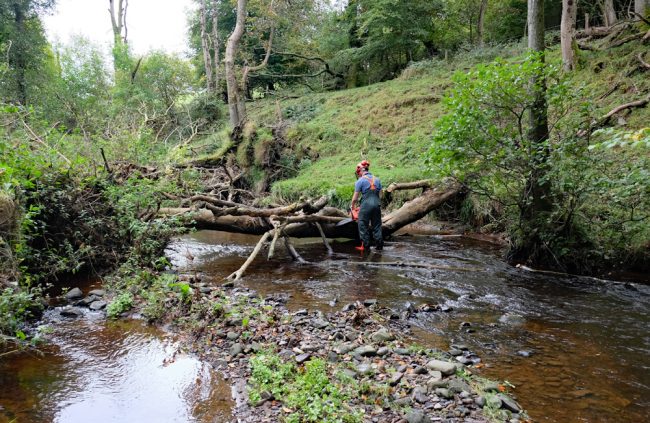 A tractor and winch was the way to deal with this but sadly ground conditions prevented this. It was all laborious handwork. 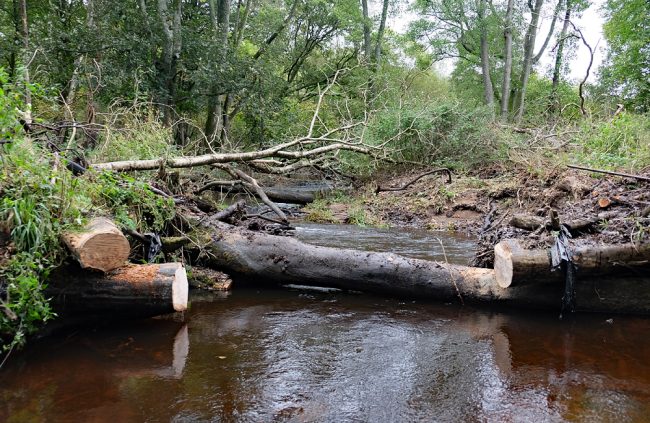 It took all day but we systematically cut our way through, clearing tonnes of timber, brash and sediment built up on this dam

We were all soaked from the waist down by the end of the day (Struan’s chainsaw trousers aren’t waterproof, my waders leak at the crotch and Muir fell in) so  were rightly pleased with our efforts. It is very satisfying to know that this could mean the difference between several miles of salmon populated habitat and none. 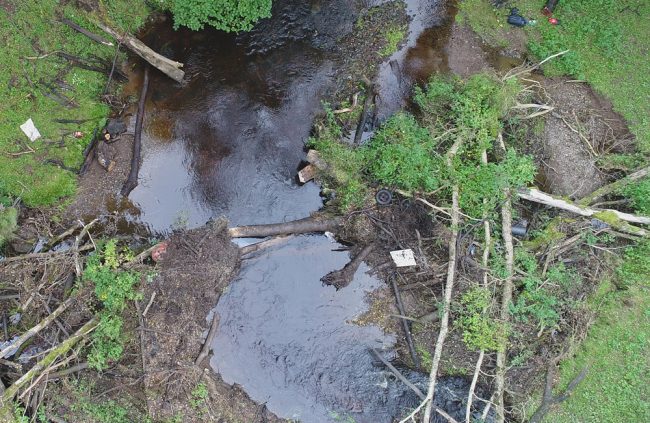 Making progress but the biggest has yet to come 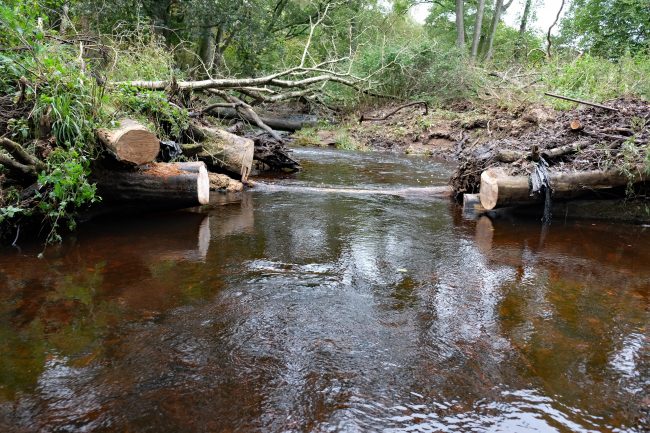 At the end of the day, all above water trees had been removed. The two that remain sub surface shouldn’t cause too much of an issue in the next two months but we will return if flows drop and see what we can do with them.