A Happy New Year to all our readers and we wish you all a prosperous 2018.

The first real post of our activities in the New Year should always be an interesting one and this one is.
Back in july 2017 we installed a tracker into Ayr harbour for Marine Science Scotland as part of their nationwide monitoring of salmon movements. Around 80 salmon were netted and tagged at Armadale in north of Scotland before being released to continue their migration to their home rivers. The plan was to tag several hundred but MSS were unable to catch enough so 80 salmon it was. Once released, it was hoped that they would be recorded entering rivers around our coast.
We only were given one tracker and asked to install it in our largest river. That is the Ayr and we duly made a mooring that was set near the old railway bridge in Ayr harbour. The tracking device was attached and left to gather data.
There are no plans to continue this study in 2018. That is disappointing but we were asked to recover the equipment and today we did. We now have to wait to see if any tagged salmon came to our river once the data is analysed. It was reassuring tio see the flashing green light was still blinking away on the device after months submerged but has it achieved anything? we will let you know when we hear. 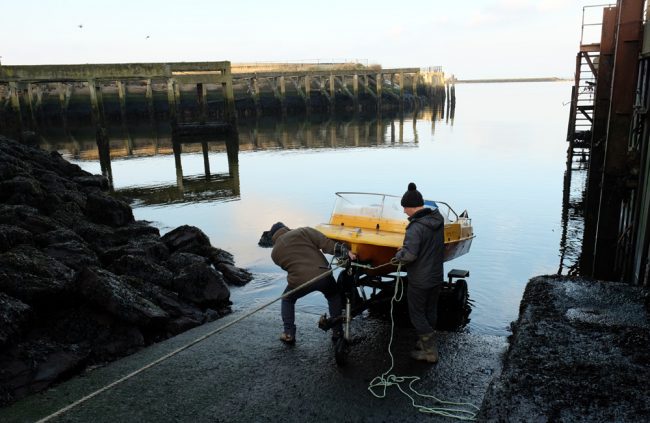 Putting the Kumquat into Ayr harbour at low tide. Despite the sun shining, it was a bitter cold day 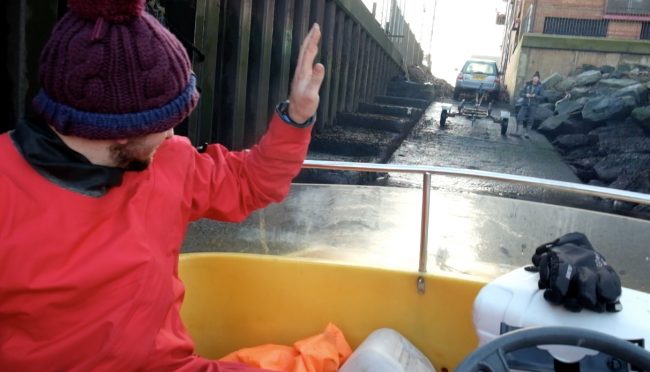 I rather think Struan was taking the Mickey!

With ice flows coming down the river and the harbour basin full of grue, we launched the Kumquat and Struan and I set off upstream at low tide to attach floats to lift the mooring. Our initial thought was 3 25L drums and 3 buoys but we hastily beefed this up to 6 drums just in case. This was a belt and braces approach but we couldn’t afford a failure or having to come back tomorrow. Once this was done, we climbed the old harbour steps for a quick stop at North Harbour Takeaway for bacon and sausage rolls and then back to see Muir (with a roll) who was our safety backup ashore. Warmed up slightly, we waited for the rising tide to work its magic.

The sun disappeared and the wind chill was beginning to get to us when the mooring finally lifted from the river bed at quarter to three this afternoon. We towed it back to the slip and reassured the Pilot Boat that we were ok (it was kind of them to come to check on us), before recovering the boat and mooring by 4.00pm. As we pulled the mooring up the slip, a child’s bike followed up the concrete, snagged on the trailing chain. That explained why we seemed to snag the bottom momentarily on the way in. We should start a bike and puncture repair shop…. bikes and footballs are the most common items we see throughout the year on the river. Anyway, until we hear the results of the tracking from MSS, we can call this…job done. 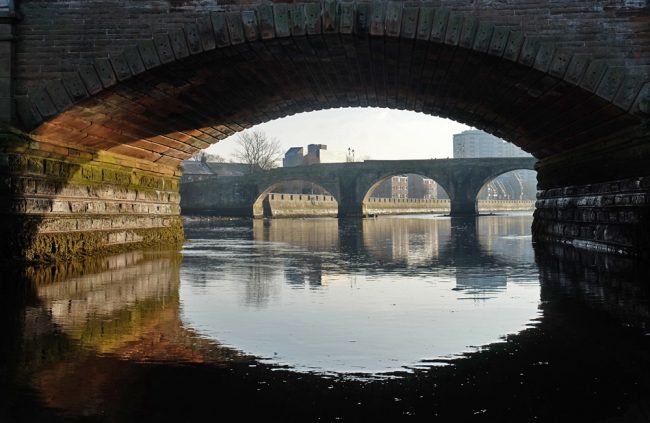 Looking upstream to the ‘Auld Brig’. It was too shallow to make it all the way but at least we tried 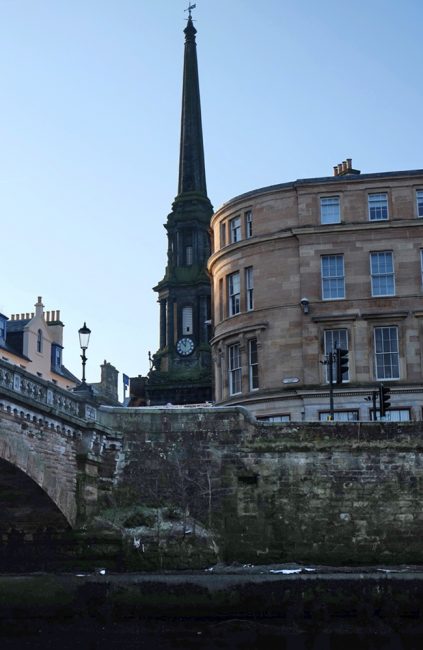 An unusual view of the Town Hall

We will upload a VLOG of all the week’s work early next week which will include today’s task. Be sure to keep an eye out for that as we are planning to do this weely in future.