Dyrock problems on the Girvan catchment

On the Dyrock Burn in the Girvan catchment we find salmon in low densities most years but we’ve never really found as many as we feel should be produced from this watercourse and its tributaries. This year is no different and we were hard pressed to find any salmon at the sites we fished today.
We surveyed 4 sites on the burn starting at the very upper end of the Dyrock near Shankston Loch. The burn is in reasonable condition despite a bit of livestock grazing taking place at the upper end. It could be better for sure and the bed was silted but we have seen much worse. The habitat apart from silt and the compaction this causes was otherwise good offering lots of fish cover in such a small burn. 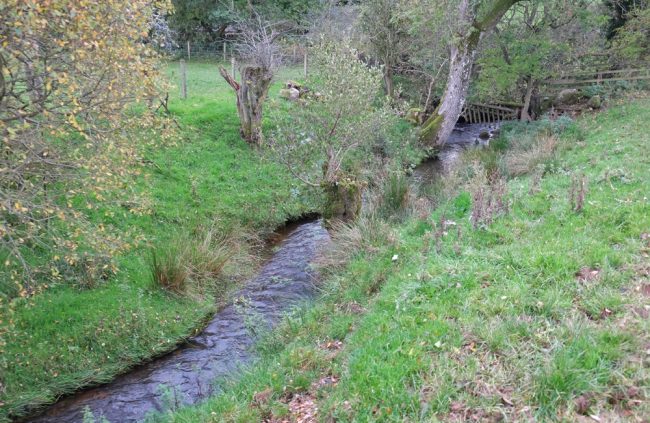 The upper Dyrock is just a small burn but we’ve found salmon to within 150m downstream of this spot previously. There were just trout today but plenty of them.

The trout numbers at this point were impressive and no doubt, some have made their way upstream as the spawning season approaches but it was well stocked and we were encouraged despite finding no salmon. 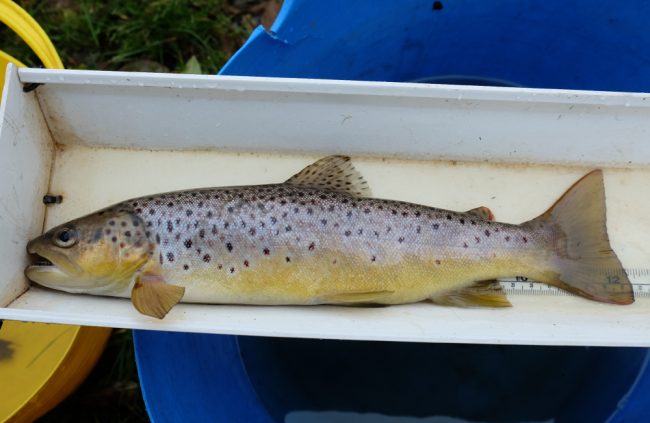 A lovely big trout for a small burn. It came from below an undercut banking. There was plenty of cover for fish so the trout numbers were good

We also fished the Dallowie Burn about 200m upstream of the confluence with the Dyrock and less than that as the Crow flies from the previous site. This is a similar sized burn as our site on the Dyrock offering very similar habitat but the fish population was poor. Silt affects both these sites but the Dallowie is more severely affected. Grazing pressures and possibly other inputs may be responsible. 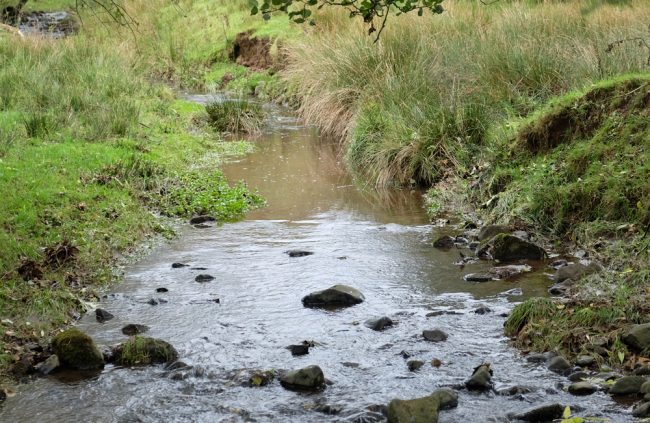 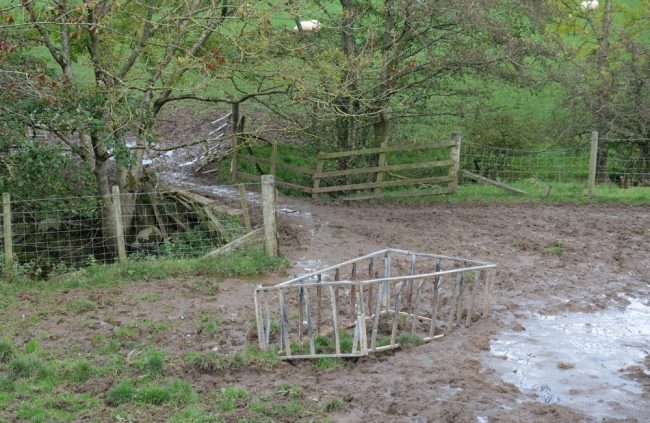 Further downstream on the Dyrock below Dalvennan Bridge, we again found good trout numbers but no salmon. This surprised us as we had translocated salmon fry last season but of course they may have moved downstream or not survived. 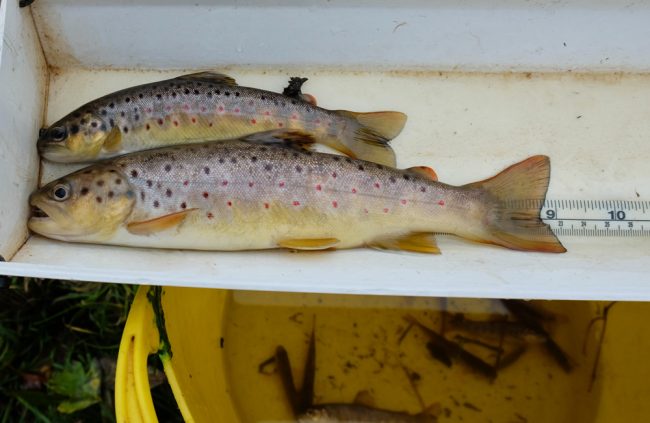 The next site survey near Orchard Farm produced parr which was a relief and they were naturally produced. This habitat was again under productive despite offering everything trout and salmon required however, it too was silted and this is without doubt the main limiting factor on this burn and the middle Girvan.
The diffuse pollution initiative by SEPA determined this Burn was at low risk of pollution and therefore didn’t include it in their project. We will be raising these siltation issues with them once again as they are limiting fish production. We’ve found plenty of issues in the Dyrock and downstream on the main stem river but fewer upstream. It should have been included in our opinion. 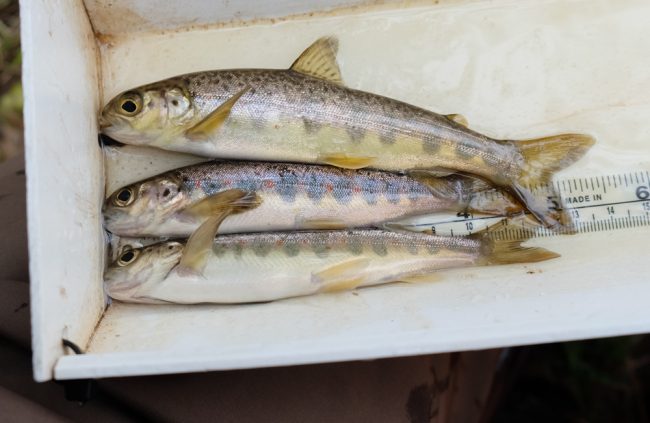 Salmon parr from the Dyrock upstream of Kirkmichael

Across the other side of the catchment, the Barlewan was surveyed and it produced some huge parr and fry. However, this burn suffers from enrichment and could be better. It has also been heavily modified and this doesn’t help. We noted fine sediment and sand at the survey site and we identified one possible source as new levies created upstream of our site. Again thoughtless actions are causing problems. 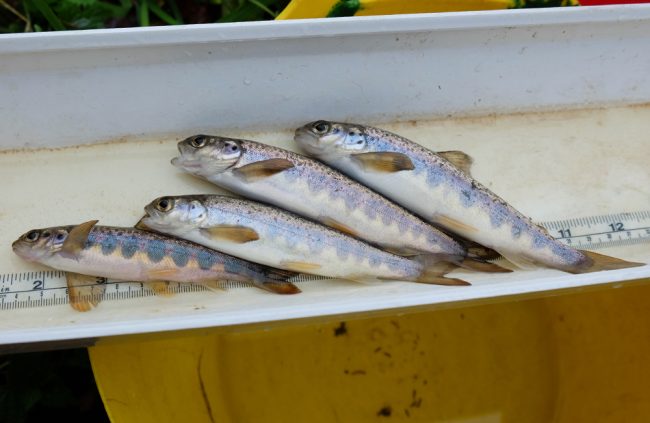 4 lovely salmon parr from the Barlewan with the largest topping 150mm. This will make a big smolt next spring 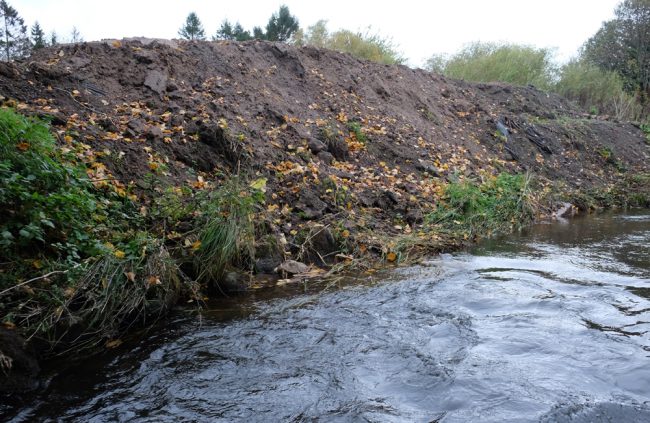 Levies on the Barlewan that have recently been built and contribute silt to the river.