The rainfall total in Mauchline for 2018 is now complete and reveals just how dry 2018 was compared to 2017. As I’ve only been collecting rainfall for a couple of years, it is hard to state what’s average rainfall is for this area however, other local recorders find that rainfall is broadly consistent between years. 2017 was considered an average rainfall year however, it started drier and ended wetter than usual. 2018 was dry by comparison and only two months were wetter than in 2017. 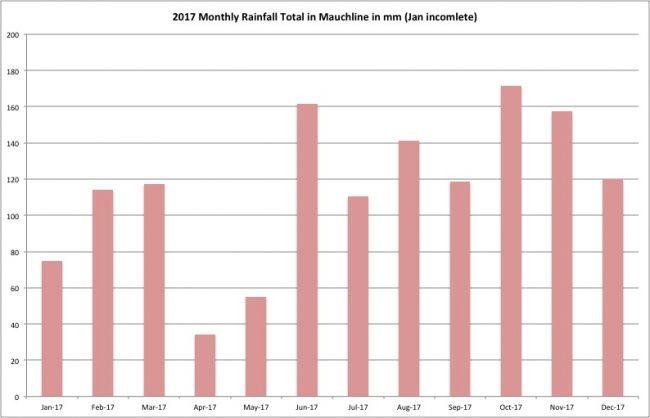 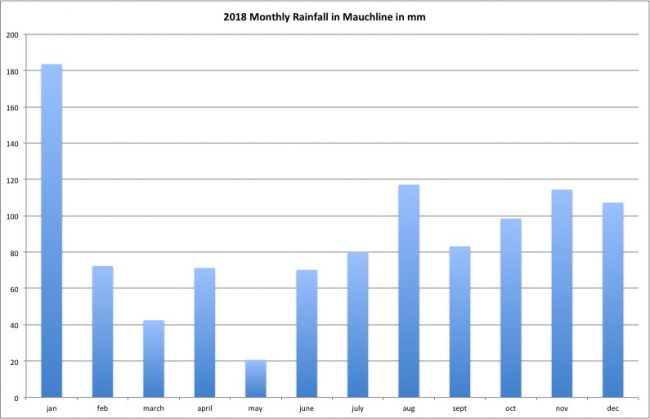 One reason why we collate rainfall data is to help understand the difficulties landowners face when applying slurry to fields in line with SEPA’s guidance and the PEPFAA Code and the 4 point plan. Annual rainfall may have a severe impact on when farms can safely apply organic fertilisers to land and how this may affect watercourses. Diffuse pollution continues to be the greatest limiting factor on salmonid productivity across Ayrshire catchments and while compliance has noticeably improved in recent years, we still receive many calls and messages when slurry is spread in wet weather and winter. There’s no restriction to the seasonal timing of slurry applications except in Nitrate Vulnerable Zones but of course, there’s little value in spreading a valuable fertiliser when crops are not growing and water logging and run off may exacerbate diffuse pollution. There are restrictions on spreading on frozen ground and when snow covered.

Looking at the rainfall data from the last 2 years and in particular, the number of consecutive dry days, we see that there were limited opportunities to spread slurry under favourable conditions particularly in 2017 which subsequently lead to widespread application over the winter months, as essential measures to reduce full slurry storage tanks. 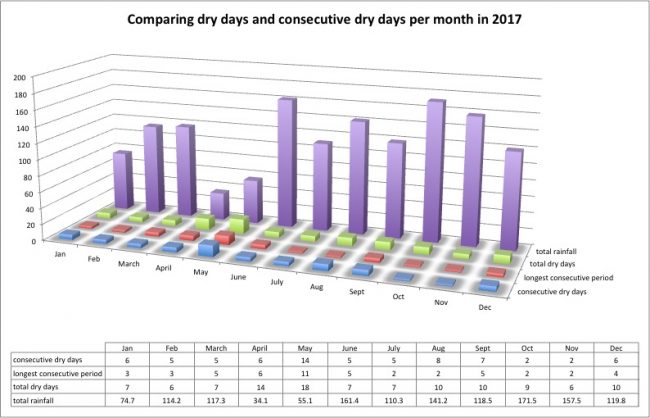 2017 Dry days and more importantly consecutive dry days examined. From July onwards, there were few dry and fewer consecutively dry days in which ideal slurry spreading conditions were available. Without consecutive dry days, the ground just doesn’t have time to drain. With exception of the 17 dry days between April and May, the longest dry period in 2017 was 5 days. 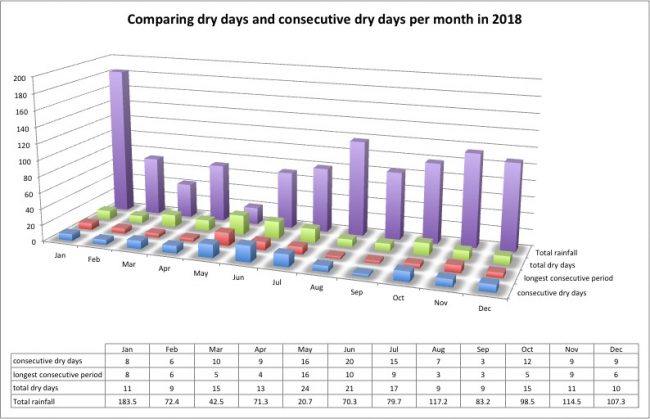 The 2018 winter so far hasn’t seen as much slurry application across Ayrshire, presumably as tanks were emptied over the summer and autumn months  when favourable conditions allowed.

These data only really apply to the Mauchline area however across Ayrshire, the weather pattern was generally similar in both years. With climate change taking hold, can we expect this situation to worsen in the forthcoming decades? I expect so. I’ve already heard it muted that dairy farming is likely to move eastwards over the next 50 – 100 years but that raises questions over where arable production would take place in Scotland? What would replace dairy on the west coast?

There’s enough uncertainty at the moment facing farming (and all sectors) with Brexit looming so we won’t speculate too much on the future impacts of climate change for now but suffice to say, we do see potential difficulties facing agriculture in Scotland in the longer term should our climate get wetter.